Oak Ridge National Laboratory (ORNL) Isotope Production Program (IPP) utilizes the unique facilities and scientific expertise at ORNL to support the goals of the Department of Energy. Isotopes are high-priority commodities of strategic importance for the nation and are essential for energy and medical industries, national security applications, and for basic research. The primary goal is to make critical isotopes more readily available to meet domestic U.S. needs. 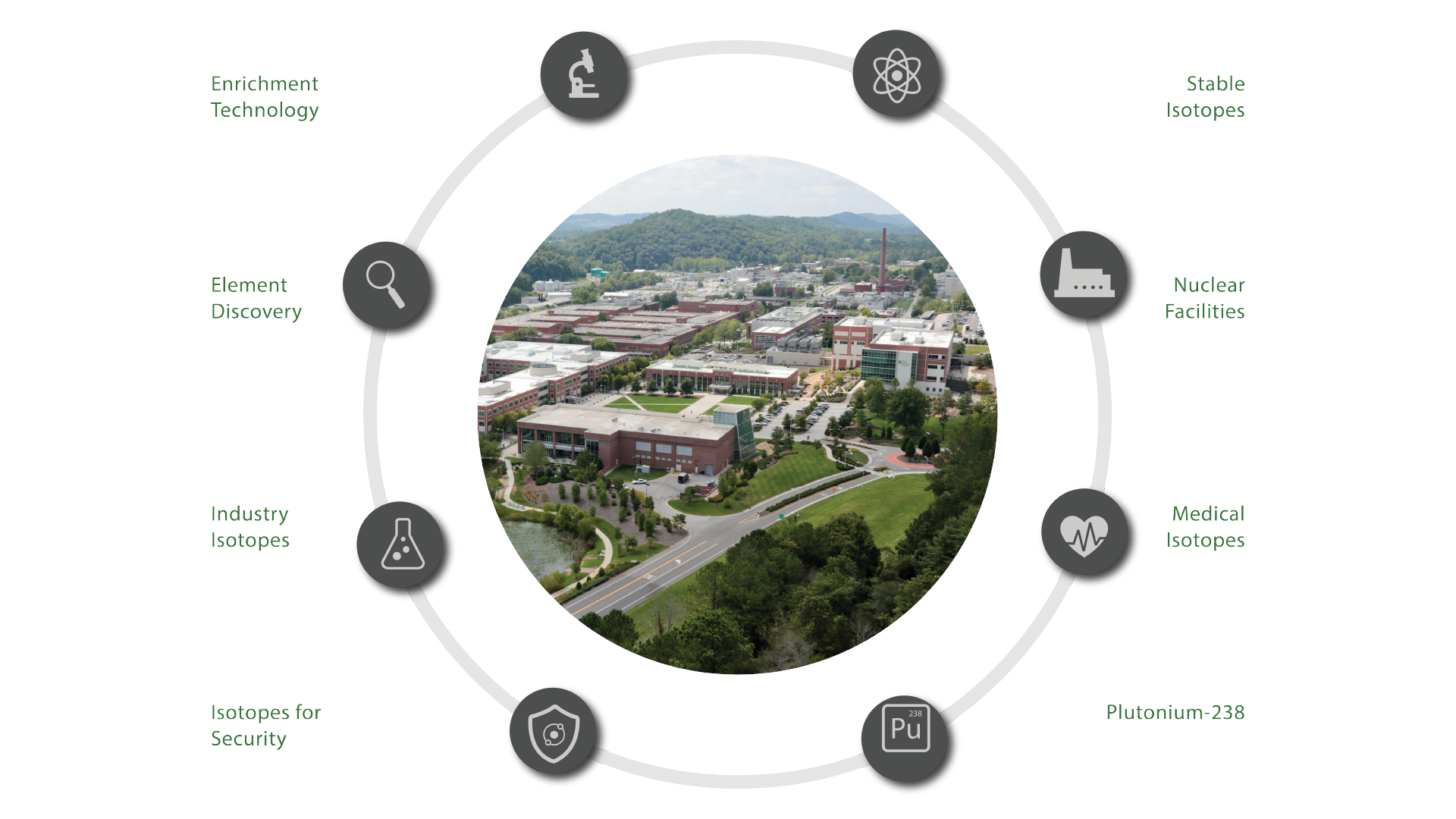 ORNL produces selenium-75, used to inspect welds by radiography and test other materials, and recently began producing promethium-147, recovering it from byproducts of plutonium-238 production, for measuring materials and powering nuclear batteries. ORNL is the largest producer in the Western Hemisphere of californium-252, used to start up nuclear reactors and analyze materials, and produces more than 70 percent of the world’s supply.

ORNL-produced nickel-63 can be used to detect unusual amounts of nitrogen, a common ingredient in explosives, making it useful for airport and other security checkpoints. It’s also an inexpensive method of detecting hazardous chemicals and vapors.

Some of the electromagnetic enrichment devices used during the Manhattan Project, calutrons, were later converted by ORNL for the separation and enrichment of stable isotopes and some actinide isotopes. Until 1998, when stable isotope enrichment was halted and the remaining calutrons were placed in standby, ORNL accumulated a significant inventory of numerous rare stable isotopes. Since then, ORNL activities have been focused on dispensing the existing inventory and production of special isotope chemical and physical forms using metallurgical, ceramic and vacuum processing methods for National Isotope Development Center customers requiring specialized products.

ORNL’s unique nuclear facilities enable the production of isotopes and development of nuclear fuels and other new materials. These include hot and cold laboratories, glove boxes, high bays, and heavily shielded hot cells with an array of specialized equipment. The most prominent is the Radiochemical Engineering Development Center, which has 15 hot cells and associated lab spaces where scientists work with some of the rarest materials on Earth. Others include the Irradiated Material Examination and Testing Facility, the Irradiated Fuels Examination Laboratory, the Radioisotope Development Laboratory and the Radiochemistry Laboratory.

ORNL produces several isotopes used for medical diagnostics and treatment. Among the best-known are actinium-225, now in clinical trials for targeted radiotherapy cancer treatment, and actinium-227, produced for a contract with Bayer for use in the drug Xofigo™, which is given to prostate cancer patients with metastasized bone cancer that hasn’t responded to other treatments. The lab also produces tungsten-188, being tested for the treatment of cancers, autoimmune disorders and other medical issues; selenium-75, used for diagnostics; strontium-89, used to relieve bone pain in cancer patients; californium-252, used in radiography; and radium -224/lead-212 generators in clinical trials for cancer treatments, among other isotopes.

ORNL was called upon to restart the domestic production of plutonium-238, need by NASA for deep space missions. In 2015, ORNL achieved the first US-produced Pu-238 in nearly 30 years, and it has since consistently increased Pu-238 production, aiming for 1.5 kilograms of plutonium oxide by 2026—enough for NASA’s deep space needs. In July 2020, ORNL-produced plutonium-238 (Pu-238) was on board NASA’s Perseverance rover, part of a supply to fuel the multimission radioisotope thermoelectric generator that will move the rover across Mars and power its data-collecting instruments. It will contribute to the Dragonfly mission to Saturn’s moon Titan, planned for a June 2027 launch.

ORNL recognized by the IAEA