High pressure ion chromatography — using a high-pressure pump to enable more rapid separation of ions — is one of the fastest and most efficient ways to do chemical separations.

The problem: Modern electronic HPICs aren’t built to withstand the high-radiation environment of a hot cell or some of the strong chemical solvents used to separate radioisotopes from contaminants.

So ORNL technicians processing radioisotopes from irradiated targets — like actinium-225 from thorium targets — have had to rely on a slower method: gravity. Instead of using the electric pump to push solutions containing byproducts from the irradiated thorium target through a column, the solutions are fed from the top, with the separations dripping out.

“Sometimes that can be tedious,” Gaddis said. “It takes a while.”

Gaddis, one of the ORNL scientists working on the Tri-Lab Ac-225 production project with scientists from Los Alamos and Brookhaven, sought a way to take advantage of modern HPIC technology to speed up the production of Ac-225, for which there’s high demand because of its use in cancer treatments.

For the past four years, he’s been building an automated HPIC capable of being used in a hot cell — and now he has a tested prototype, invention paperwork and a patent agent.

“A lot of companies are trying to get into separations,” Gaddis said — but to his knowledge, his HPIC is the only one adapted for use in a hot cell.

Gaddis started by designing the system so that the computer and electronic pump could be located outside the hot cell, to give the operator access. He stripped the part of the system that will be located inside “down to bare bones,” building a simplified control panel with air-actuated valves to control the flow of liquid through the system and to change the chemicals pumped in. The component that holds the columns, into which Ac-225 and other byproducts flow when separated, is designed so that each column can move independently without hitting another when moved by the operator with the automated manipulator arms.

“That way, it’s very easy to load, and we can collect a clean product,” he said.

That the processing must be controlled by manipulator arms, not by human hands, presented challenges in the design. Besides the spacing of the columns and the need for easy-to-flip valve switches, the caps that seal the columns had to be able to be threaded securely by the manipulators. Gaddis ended up having custom caps 3D printed on site.

“Our No. 1 concern was, ‘Can we fix a leak inside the cell with the manipulator?’” Gaddis said. “A leak could waste or contaminate the Ac-225.”

During testing earlier this year in a specialized hot cell mock-up facility at ORNL, Gaddis induced a leak and was able to quickly fix it with the manipulator holding a wrench.

A test in the facility where Gaddis ran cold water through the system showed it could perform the fourth separation step in the multi-step process— removal of adjacent lanthanides — in 75 percent less time than using the gravity-fed system. His research was presented at a conference, and he plans to publish it as well.

“Ideally, if we can reduce the separation from four hours to one hour, we can get more product out,” he said. “Ac-225 is very much in demand, and it has such a short half-life — just under 10 days. Hours matter.”

Having implemented suggestions from several colleagues experienced in hot cell work, Gaddis hopes to have the automated HPIC system installed in the hot cell used for Ac-225 production by fall. It’s also his hope that the system can be used for more of the six separations required to process Ac-225 — and, ultimately, in the separation of other isotopes.

“I’d love to shave more time off,” he said. “Any time is valuable.”

Gaddis came to ORNL five years ago after working as a chemical technician at DuPont’s Industrial Biosciences facility in Vonore, Tenn.

“Before I ever came to ORNL, I decided I can work at any chemistry job, but if I can do something to either help people or help the planet, I’d enjoy doing that,” Gaddis said. “Being able to work with isotopes that are being used to cure cancer, HIV, and other diseases is wonderful. I get excited every day to go to work.” 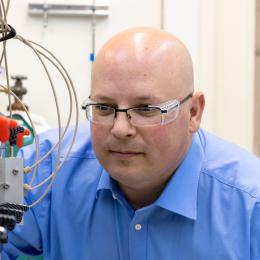