Melanie Mayes: On the trail of climate impacts, from the tropics to cities

Science has taken Melanie Mayes from Tennessee to the tropics, studying some of the most important ecosystems in the world. She’s now leveraging her science to gain a better understanding of climate impacts and resilience solutions in the nation’s largest cities.

As a distinguished staff scientist at the Department of Energy’s Oak Ridge National Laboratory, she has explored the valleys and streams of East Tennessee, Puerto Rico’s mountain forests and the tropical landscape of Panama to understand how elements like carbon and mercury move through and affect the environment. Her focus is turning to urban ecosystems, where some of the world’s most vulnerable populations are at risk from rising temperatures.

Mayes is a biogeochemist, a discipline that focuses on interactions across ecosystems. Her first experience at ORNL was as an intern focused on the fate of radionuclide contaminants. She studied radionuclide mobility in soils on the ORNL reservation and at the Hanford, Washington, nuclear production complex. The research expanded her knowledge of soil physics and assisted in her pivot to the study of how carbon flows through the soil and impacts the climate.

“There was a lot we didn’t know about soil carbon” back in the mid-2000s, Mayes said. “We were mostly looking at it from an agricultural perspective: was there enough carbon in the soil to grow food? There was a real gap in the science.”

She and her colleagues realized that climate models at the time lacked detail on microbes and their extracellular enzymes — the workhorses of soil decomposition critical to carbon cycling. Their work led to the development of a microbial enzyme-based soil carbon cycling model called MEND that has since been improved to incorporate genomic information on soil microbes.

Mayes’ research is highly regarded by her peers. She became a Fellow of the American Association for the Advancement of Science in 2014 and received a DOE Office of Science Early Career Award in 2016. In the early career work, she focused on microbial traits and function in the soils of tropical forests and wetlands to better model greenhouse gas emissions from that complex environment.

“I’ve always been interested in the intersection of models and experiments, building ecosystem experiments to provide better parameters and data for models,” Mayes said.

Mayes was the first in her family to attend college after growing up in the Missouri Ozarks. She credits a professor during her undergraduate years at the University of Missouri for encouraging her interest in earth science, including the opportunity to engage in research. “It was important for me to see a woman doing this job. It’s when I ‘got it’ — women can do this work,” Mayes said. She earned her master’s and doctorate degrees in geological sciences from the University of Tennessee, Knoxville, while working at ORNL as an intern, a graduate student and a staff member.

In one of her most recent projects, Mayes began what she calls a natural progression in her science to investigation of urban environments, where the majority of the world’s population resides and the preservation of green spaces is being considered as a climate resilience tool. Cities are also huge sources of carbon dioxide and methane from transportation, building heating and cooling, and power generation — some of the infrastructure known as the built environment.

In 2019, Mayes and colleagues at ORNL began conducting an analysis of the forests and meadows surrounding the campus of the National Institute of Standards and Technology in Gaithersburg, Maryland. The NIST campus was built in a once rural area of the state in the 1960s. Today, NIST sits squarely in an urban environment, surrounded by interstate highways, office parks, shopping centers and subdivisions. NIST has been particularly interested in developing instrumentation to measure plant photosynthesis and plant characteristics – such as greenness, leaf area index and biogenic emissions – on campus.

Mayes is teaming up with researchers from Boston University and the City University of New York who study how the trees on the edges of such forest patches grow faster, potentially because of greater exposure to sunlight, but at the same time are vulnerable to high temperatures, drought, and high levels of ozone and particulate emissions.

“These are issues that go directly to a better understanding of the carbon cycle. How much more carbon are forest edge trees incorporating into their biomass? What belowground resources — nutrients, soil moisture, microbial community — fuel their growth? We need a better understanding of these processes to ensure the accuracy of the carbon budget in our climate models,” Mayes said.

The project focuses on the belowground processes that influence carbon cycling on NIST lands. The team took soil samples across a forest-to-meadow transect at NIST to examine the underground environment, looking at how root distribution, nutrient content and soil moisture change in the more stressful forest edge environment. They found lower soil moisture at the forest’s edge, which could explain enhanced growth and sensitivity to drought found there.

With NIST data collected and assessed, Mayes and her colleagues are working on incorporating the information into a model that will expand their understanding of soil-climate interactions in the green space amid a highly urbanized area.

“Our science provides the opportunity to understand how the built environment and the natural environment interact and specifically affect people, which could provide insight into how tree plantings and green space could alleviate heat in urban spaces,” she said.

Mayes’ new role as ORNL’s Biogeochemical Dynamics Group leader has helped extend the impact of her mentoring, from working with individual students and postdoctoral researchers to a structure that more broadly supports early career scientists.

“It’s been an interesting transition,” she said, “to go from where I'm working in my own space to where I'm helping grow our programmatic research and supporting young scientists. The thing about being a group leader is it gives you more opportunity to talk to other leaders so we can work together better. It’s thinking more broadly about how we as a group, section, division and directorate can help young scientists and extend our research into new areas.”

“It's very exciting right now at ORNL because we have new people who are coming in with new ideas and experiences, and so now I'm trying to focus on being sure that they can build their science careers here. We can help them understand what DOE science is about and where the opportunities are,” Mayes said.

“It’s been so much fun here,” she added. “My background is in geology, and I’ve worked with contaminants, with neutrons, and with mercury. Then I started working with soil carbon because understanding and mitigating climate change is so tremendously important, and because soils serve as an important store of carbon.

“Being a scientist is about lifetime learning,” Mayes said.

‘Proceed as if success is inevitable’

She didn’t intend to stay as long as she has at ORNL. “You hear people say that all the time. But then they talk about the great collaborations they’ve had at the lab,” Mayes said. “There is always something new and different to take on. You will never get bored here; it’s just not possible.”

Mayes has a lot of stickers on her office door, but points to one she considers especially relevant. “Proceed as if success is inevitable,” it reads.

“In other words, stop worrying about whether or not you will succeed the first time,” Mayes said. “I’ve learned that the more consumed with worries you are, the less effective you’ll be. Have the courage and confidence to make those ideas come to fruition. And if that one special idea doesn’t make it, there will be plenty more. There is lots of time, and lots to focus on.” 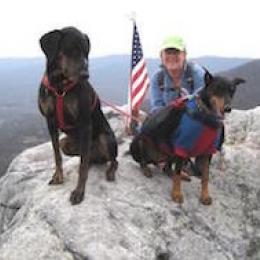