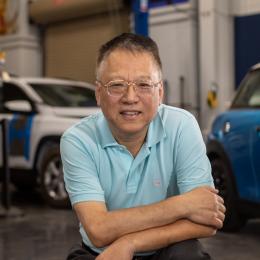 Hong Wang received the BSc degree in Electrical Engineering from Huainan Institute of Mining Engineering (Huainan Mei Tan Xue Yuan) in 1982, and master and doctorate degrees with distinguished grade in process control and power plant engineering from the Huazhong University of Science and Technology (Huazhong Gong Xue Yuan, a top 10 Chinese University), Wuhan, China, in 1984 and 1987, respectively. He moved to UK in 1988 and was a postdoc Research Fellow with Salford University (Salford, UK), Brunel University (Uxbridge, UK) and Southampton University (Southampton, UK) before joining the University of Manchester Institute of Science and Technology (UMIST), Manchester, U.K., in 1992 as a lecturer in process control. He was then promoted to senior lecturer and reader in 1997 and 1999, respectively at UMIST. Wang was a Chair Professor in Process Control of complex industrial systems at the University of Manchester (a top 25 university in world ranking) from 2002 to 2016, where he was the deputy head of the Paper Science Department, director of the UMIST Control Systems Centre between 2004 - 2007 (which is the birthplace of Modern Control Theory established in 1966). He was University Senate member and a member of general assembly for many years during his time in Manchester.

Between 2016 – 2018, he was with Pacific Northwest National Laboratory, US Department of Energy (PNNL, Richland, WA, USA) as a Laboratory Fellow  and Chief Scientist, and was the co-leader and chief scientist for the Control of Complex Systems Initiative (https://controls.pnnl.gov/team.stm). Hong Wang joined Oak Ridge National  Lab at corporate fellow grade (Comp Title/Job) in January 2019.  He is currently a PI for several projects from DoE on transportation systems, hydropower systems and manufacturing systems.

1) Hong Wang also serves as  Professor emeritus of the University of Manchester (UK) - a life-time title.

2) Adjunct Professor with the School of Civil and Environmental Engineering at the University of Washington (Seattle),

1) Neural Networks: Wang has been working on the field of neural network based adaptive learning control systems since 1993, where at first he developed direct adaptive neural network (NN) controls for generic unknown nonlinear systems using multiple layer perceptron (MLP) neural network to learning the unknown dynamics of the system, and using online learnt NN models to obtain the NN controller with rigorous closed loop system performance analysis. Motivated by the challenges that most unknown systems are subjected to random uncertainties, he further originated the work on stochastic distribution control (SDC), where the B-spline NN was used to learn output probability density functions (PDF) and the NN weights are learnt via a state space dynamic structure that aims at controlling the output PDF of the system rather than just controlling the output mean and variance commonly used in traditional stochastic control theory. This allows  effectively decoupling the time- and space-domain variables in obtaining practically real-time implementable output PDF control through learning. Wang’s theory on SDC has been successfully applied to several industrial processes including paper-making processes (Arjo-Wiggins, Iggesund Paper Board, Georgia Pacific, etc) and blast furnace in steel making , where significant impact on the system optimized operation has been achieved. Indeed, before moving to USA in 2016, Hong Wang had been working on advanced adaptive control and intelligent controls using artificial neural networks and neuro-fuzzy tools for unknown nonlinear systems with applications on several practical systems such as hydropower generation and pH controls in chemical plant, where hydro-turbine speed control and generator excitation control have been developed. He has published more than 100 journal papers and a book (Advanced Adaptive Control, Pergamon Press, 1996) in these area.

2) Stochastic distribution control theory and stochastic optimization: Wang originated the theory on stochastic distribution control (SDC) in 1996, where the main purpose of control input design is to make the shape of the output probability density functions to follow a targeted function for general non-Gaussian dynamic systems. This has been regarded as a novel stochastic control theory that has found a wide spectrum of applications in general modeling, data mining, filtering design and optimization for uncertain systems. This theory also provides effective tools for solving decision-making problems for systems subjected to uncertainties, and how the impact from uncertainties can be minimized during the decision -making phase (https://onlinelibrary.wiley.com/doi/full/10.1002/oca.2755).

Indeed, Wang has initiated the shaping of probability density function of cost function and constraints in stochastic optimization - which pioneers a total solution to generic stochastic optimization problems, where the decision variables are selected to control the cost function PDF to make it as narrow and as left as possible - leading to a robust and reliable optimization effect in comparison with the existing stochastic optimization which only minimum the mean of the cost function.  His book chapter titled "Decision-Making for Complex Systems Subjected to Uncertainties — A Probability Density Function Control Approach" will appear in the forthcoming SpringerLink book titled " Handbook of Reinforcement Learning and Control" in 2021 following his invited paper published at 2018 IEEE 14th International Conference on Control and Automation (ICCA) titled "Objective pdf-shaping-based economic dispatch for power systems with intermittent generation sources via simultaneous mean and variance minimization".

3) Fault diagnosis and tolerant controls: Hong Wang has also been working on fault diagnosis and tolerant controls since 1989. He originated the theory of using adaptive control tuning mechanism to perform fast fault diagnosis for dynamic systems (https://ieeexplore.ieee.org/abstract/document/508919), and the collaborative fault tolerant control for complex dynamic systems composed of multi-agent subsystems. This area of research has led to his plenary talk at the 2018 IFAC Safeprocess Conference in Warsaw (which is the largest conference on process safety taking place once every three years per organized by the International Federation of Automatic Control (IFAC)), and contribution of a chapter titled "Stochastic Fault Detection" for  the Encyclopedia of Systems and Control.

4) {max, +} Algebra Based System integration and Human-in-loop systems: In 2010, he originated the use of {max, +} algebra for the integrated modelling of complex systems (https://ieeexplore.ieee.org/abstract/document/6160654) and discovered the square root impact principle that provides consolidated foundation for the mathematical understanding of integration between industrialization and advanced information Technology (IT). Along this new research direction, he has developed novel quantitative description of human-in-loop systems using Brain to Computer Interface (BCI) techniques and has received best paper awards on this. When he was with the University of Manchester, he acted as one of the themes leader for the first ever biggest mathematic initiative funded by the UK research council (EPSRC) titled "Centre for Interdisciplinary Computational and Dynamical Analysis" on Analysis of Adaptive Systems and Control - developing hybrid system modeling and control using tropical algebra. The initiative represents research collaboration among Manchester Math, Computing (where the world first computer was born) and Control systems.

5) Nonlinear Control and Robotics: Wang developed a unified framework based control design for generic nonlinear systems with known dynamics, where it has been shown that a time-varying control with flexible structure can be used to control any nonlinear systems with the required adaptive tuning of control parameters (H. Wang, Y. Wang and P Kabore, Time-varying controller for known nonlinear dynamic systems with guaranteed stability, International Journal of Systems Sciences, Vol. 33, pp. 931 – 938, 2002).  In addition, he has also unified Lyapunov stability analysis with optimal control by taking the objective function as a Lyapunov function candidate - this allows simultaneous optimization with guaranteed stability for closed loop control systems.  The work has been applied to the design of robotic systems, where new tracking criteria (tracking error probability density functions and entropy) has been developed to obtain better tracking control of robotic systems with respect to their trajectories.

Hong Wang has received 10 prizes and awards for his work in these areas, including

He is now an associate editor for IEEE Transactions on Neural Networks and Learning Systems.

Hong Wang is an editorial board member for other 7 international journals, and is the member of the following 3 technical committees of International Federation of Automatic Control (IFAC).

Wang was the member of the executive committee for the UK Automatic Control Council (UKACC) and the honorary treasurer for UKACC when he was in UK, and member of EPSRC (NSF equivalent) college member. He was the general conference chair for the international conference on Control'2008, which is the largest conference series of UKACC taking place once every two years. He was also the program chair for the 2014 World Congress on Intelligent Control and Automation which attracted more than 1000 attendees worldwide.

1D Modeling for the Development of a Digital Twin for Hydropower Systems with Applications for a Testing Rig...