The Institute for Quantum Computing (IQC) at the University of Waterloo recently invited researchers to “explore the frontier” of quantum technology at one of the world’s leading science and research institutes.

IQC’s Quantum Innovators workshop in science and engineering, held October 2–5, brought together an international group of post-doctoral and early-career researchers for a four-day, all expenses paid forum to exchange ideas on current theory and experimentation for developing next-generation quantum technology. Among them was Oak Ridge National Laboratory (ORNL) Wigner Fellow Joseph Lukens, who contributed cutting-edge research on using photons, or particles of light, for quantum computing and communications. 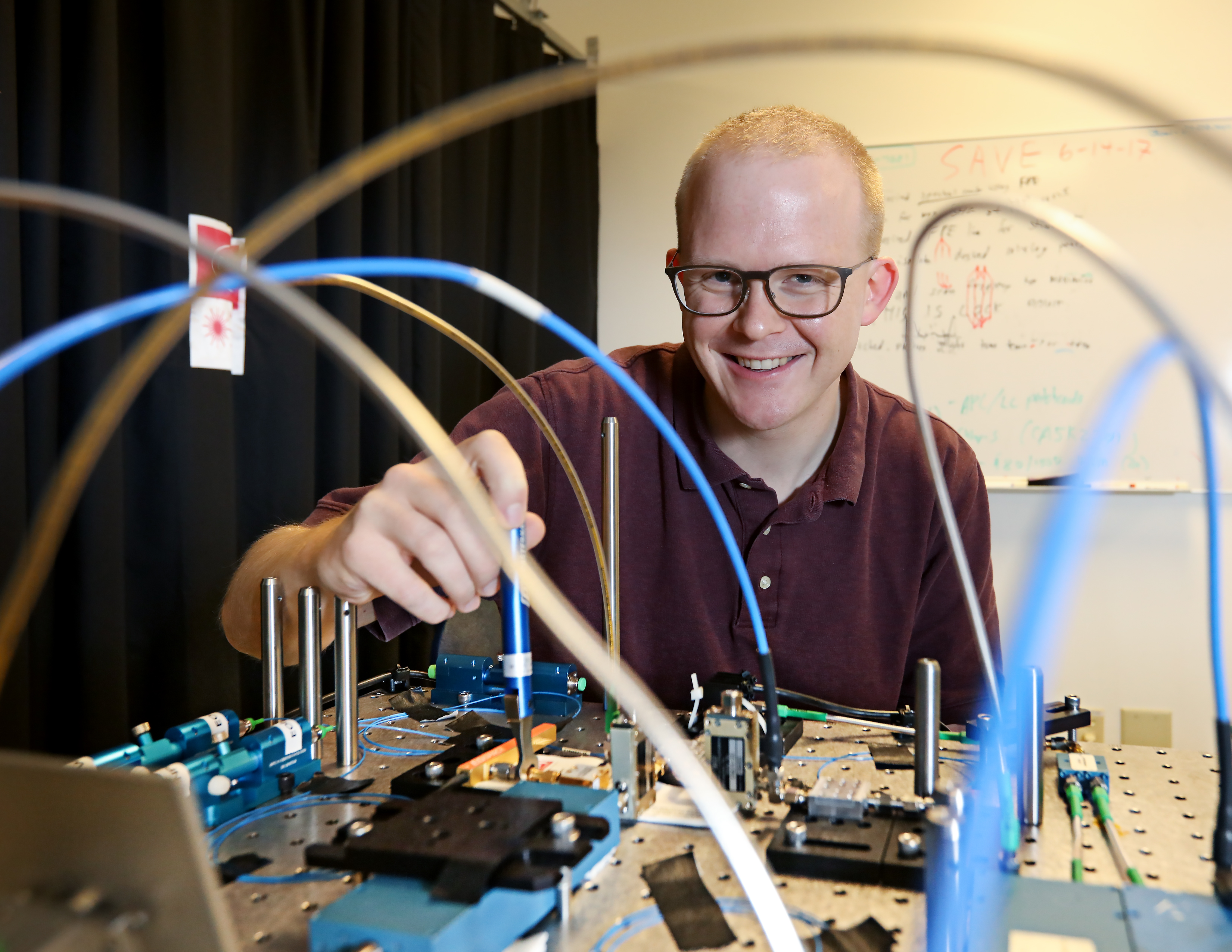 Twenty-four participants from countries including Germany, the United States, Sweden, Canada, and the United Kingdom met to discuss the challenges and opportunities in building future computing systems that leverage the quantum properties of trapped ions, photons, superconducting circuits, quantum dots, and other innovative technologies.

While classical (non-quantum) bits are transmitted as 1 or 0, qubits, which are governed by quantum mechanics, can be both 1 and 0 at the same time. Essentially, these extra states introduce increased complexity that can be harnessed to speed up processing, significantly advance computer simulation, secure communications, and solve new problems to outclass even the world’s best supercomputers.

Growing interest in quantum technologies is fueled by a global competition to reach new milestones in computing capabilities. To achieve goals such as exascale and open wider possibilities for scientific discovery, high-performance systems are steadily pressed for more speed and power.

“As we approach a bottleneck not in engineering but physics, taking advantage of quantum resources will be an important part of the solution,” said Lukens.

For decades, Moore’s law, the 20th-century observation that the number of transistors on a chip doubles every two years, has been a constant. Smaller, more efficient components have resulted in exponentially more powerful computing resources. But in the 21st century that trend is waning as the size of transistors approaches physical limits.

At 14 nanometers (nm), current industry standard transistors, or the tiny on-off switches that control the flow of electrons in processors, are already approximately 500 times smaller than a red blood cell, or 350,000 times smaller than the common ant. Functioning transistors as small as 1 nm have been constructed, but as technology nears the atomic scale, quantum mechanics comes into play, meaning the behavior of subatomic particles begins to interfere with the way classical computers are designed to operate.

At single-digit nanometers, transistors are so small that electrons behave differently and can pass through a transistor’s closed gates in a phenomenon known as quantum tunneling. Because classical computers use electrical signals to communicate, errant electrons can disrupt processing and result in information loss.

Quantum computers by contrast are designed to use subatomic forces to their advantage and harness the quantum or physical properties of matter and energy in their smallest quantities.

“One of the biggest advances for science will be the impact to our simulations,” said Lukens. “The ability to simulate more complex systems will support many disciplines and cultivate discoveries with important benefits in the real world.” In chemistry, for instance, advancing the study of complex proteins that cannot be simulated with classical resources is key to developing new medicines and advancing medical treatments.

“The IQC workshop reinforced the challenges and opportunities ahead in quantum computing,” said Lukens.

Remarkable quantum technologies are already in use, such as China’s ambitious satellite that exploits the quantum behavior of paired or entangled photons to create encryption keys for secure communications. Google, IBM, and Harvard have all climbed toward quantum supremacy, a term for the threshold in quantum information processing with which no classical computer could compete. But uncertainty remains over the different approaches to developing quantum computers and overcoming significant obstacles in reliability, cost, and scaling.

“We are still at a discovery stage with diverse possibilities open for future quantum systems, but the variety of theory and experiment available also generates excitement and drives the science and technology forward,” Lukens explained. “To be a part of that excitement at the IQC with researchers at the forefront of quantum technologies was an invaluable experience.”

UT-Battelle manages ORNL for the DOE Office of Science. The single largest supporter of basic research in the physical sciences in the United States, the Office of Science is working to address some of the most pressing challenges of our time. For more information, please visit science.energy.gov.—by Ashley Huff