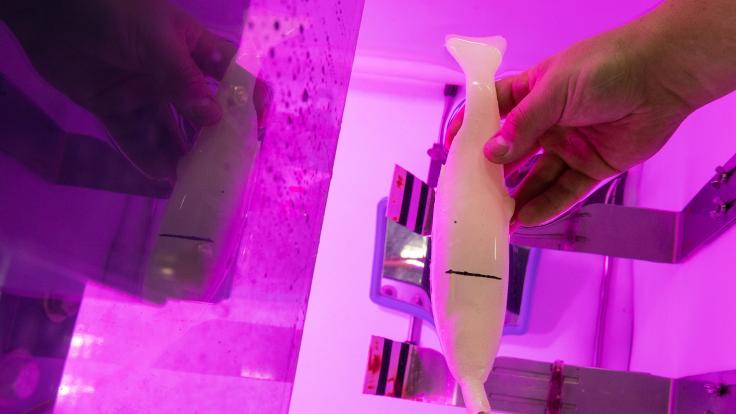 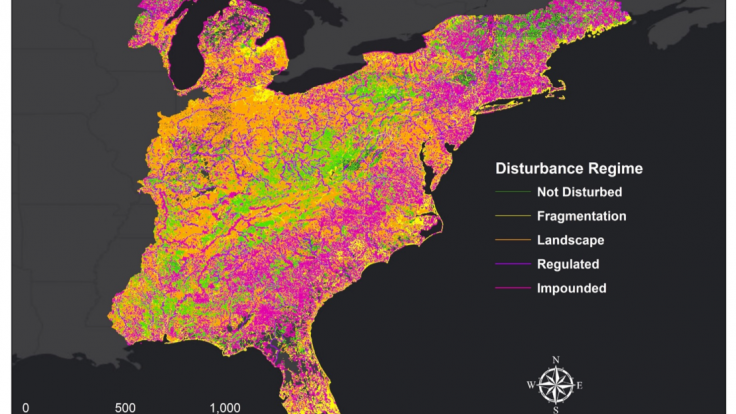 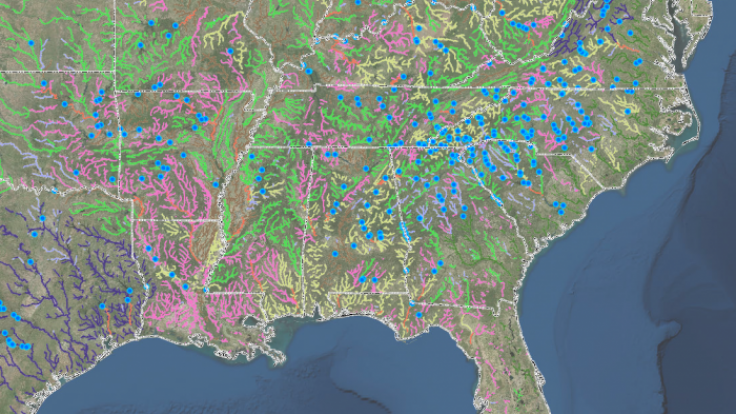 Hydropower is the largest source of renewable energy and utility-scale energy storage in the United States. It accounts for 6% of the total electricity generation in the country. With millions of miles of rivers and lakes across the nation, there is great potential to increase renewable energy production through water power technologies. Oak Ridge National Laboratory (ORNL) research and development activities are focused on lowering the costs of hydropower, enhancing hydropower’s contributions to the resiliency and reliability of the nation’s electric power grid, and studying ways to reduce environmental impacts and improve the regulatory process for hydropower.

Tools for decision-making
Providing tools and technologies to assist with design and real-time optimization of hydropower generation that reduce costs and increase efficiency.

Data analytics
Generating key data and models that enable new research and development and improve the operations, value, and sustainability of entire fleets of hydropower facilities. 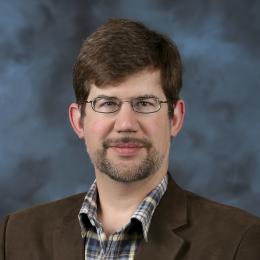 Black start capability is one of a number of vital services that HydroWIRES is investigating to understand and utilize the full potential of hydropower and pumped storage hydropower (PSH) to contribute to electric system reliability and resilience, now and into the future.

ORNL has released the U.S. Hydropower Development Pipeline Database that is a snapshot of proposed hydropower facilities in the United States that have submitted applications for permitting from FERC or Bureau of Reclamation and tracked all the way up until construction. 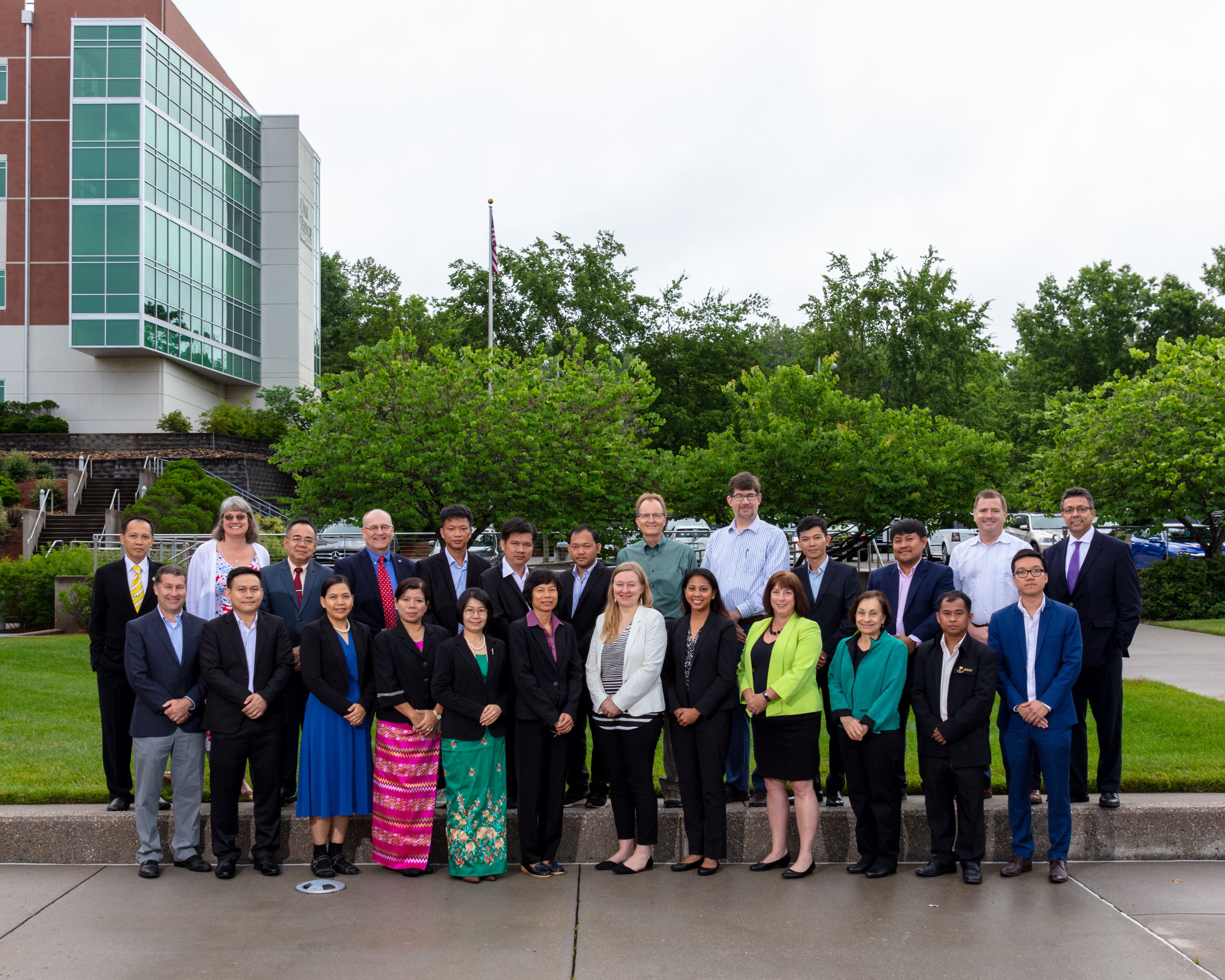 Partners in the Lower Mekong Initiative

The representatives from Cambodia, Laos, Myanmar, Thailand and Vietnam joined guests from the U.S. Department of State and the Department of Energy (DOE) as well as academic institutions for a multi-day workshop that featured sessions and tours at ORNL, the Tennessee Valley Authority in Knoxville and Chattanooga, and the U.S. Corps of Engineers in Nashville. DOE Deputy Assistant Secretary for Asia and the Americas Elizabeth Urbanas opened the workshop by welcoming the delegation to the United States and highlighting the Department of Energy and the national labs’ technical capabilities to work with other countries to promote sustainable secure energy markets. 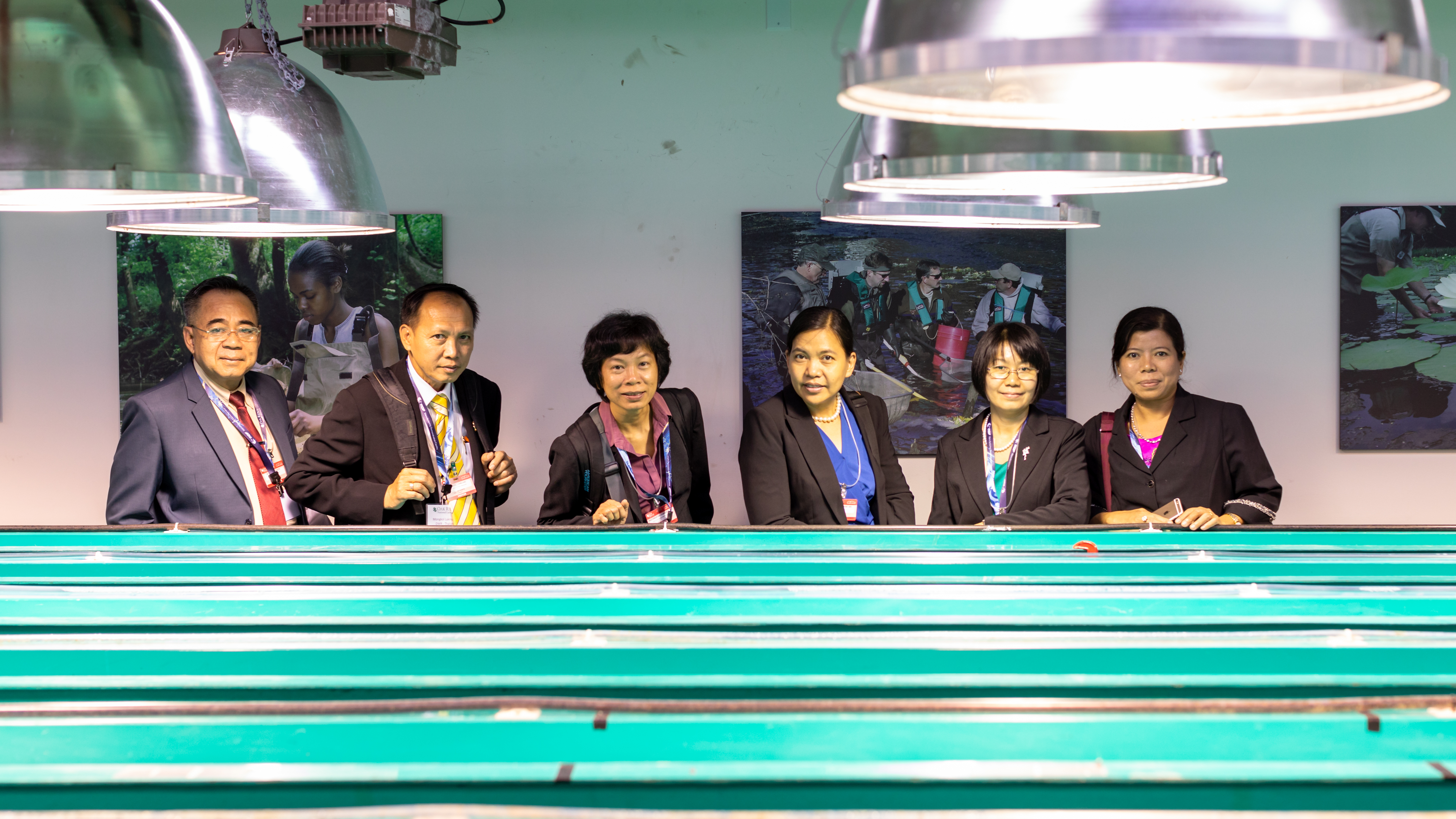 LMI is a multinational partnership formed to create integrated sub-regional cooperation among the Lower Mekong countries to address development and policy challenges in specific areas of interest: environment and water; energy security; education; health; connectivity; and agriculture and food security.

The workshop, “LMI—Integrating River Planning for Energy and Environment Technical Workshop,” focused on the group’s interest in strengthening water-related data management and information sharing in the Lower Mekong. 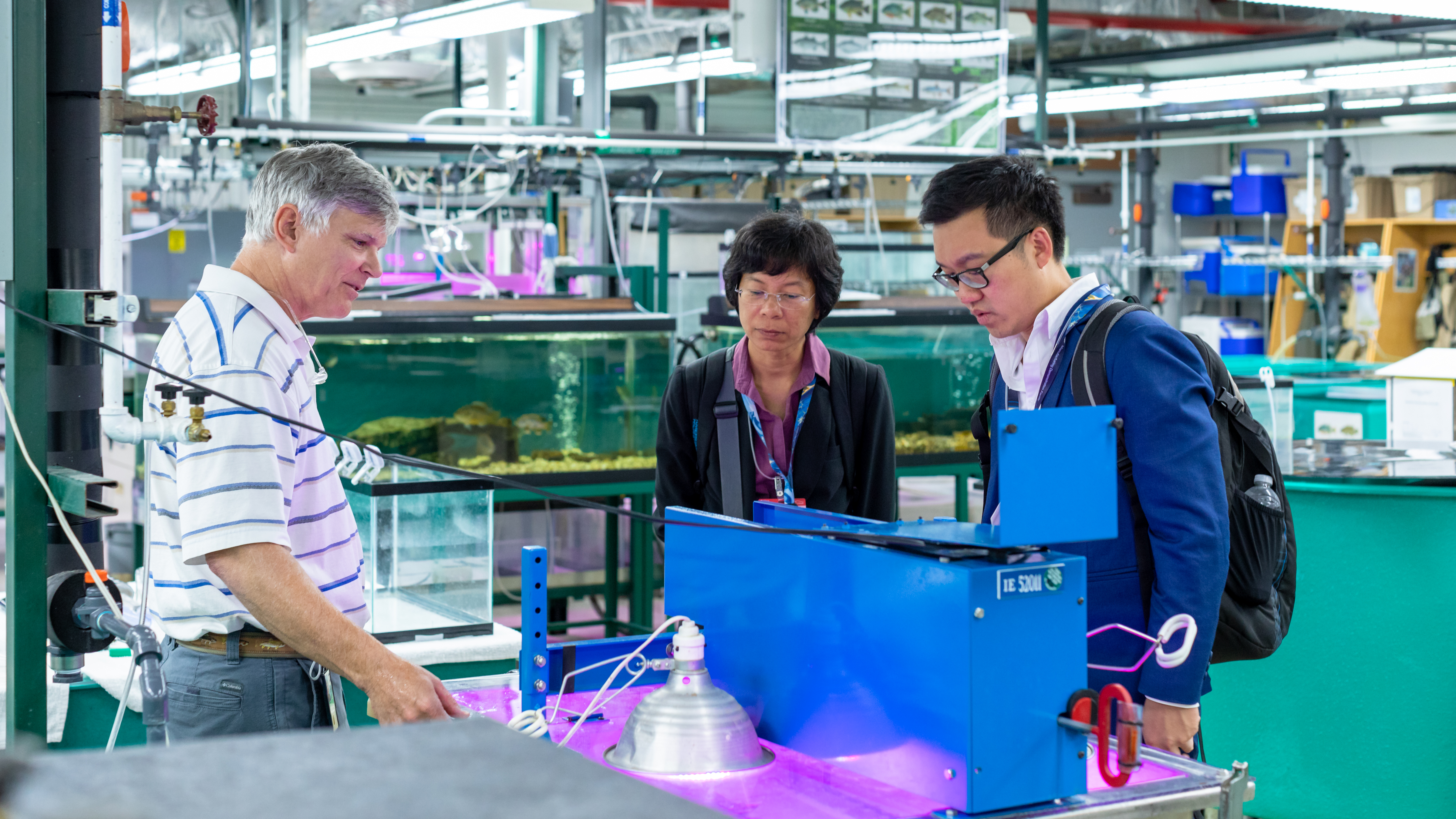 The workshop addressed tools for monitoring and data collection, visualization, and implementation in real-time river system scheduling, modeling, and optimization, as well as tools such as hydrodynamic and water quality models and software needed for short- and long-term scheduling and planning for multipurpose river system functions and future development.

This workshop supports efforts to promote access to real-time data under LMI’s Mekong Water Data Initiative. The workshop was sponsored by the Department of State and Department of Energy.

July 25, 2018 — A stream classification system developed by researchers at the Department of Energy’s Oak Ridge National Laboratory can help assess physical changes to United States streams and rivers from human influences and aid in more effective management of water resources. 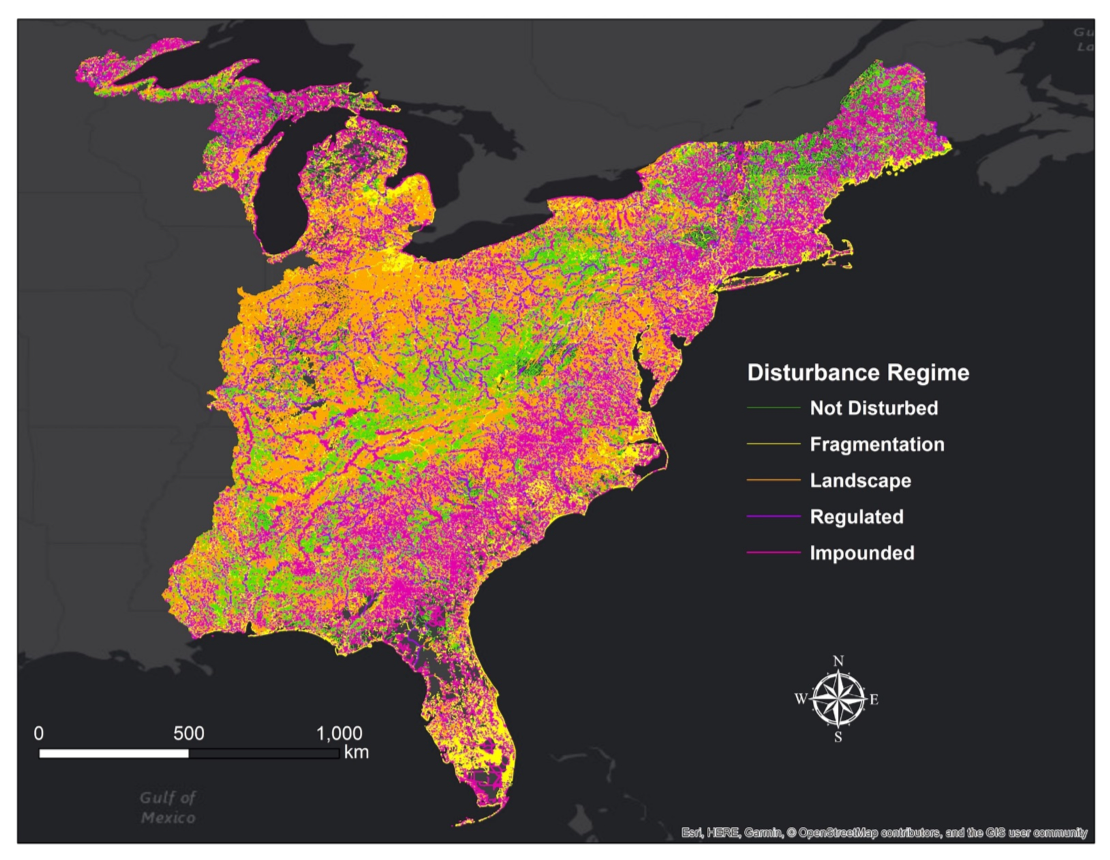 The novel framework, published in PLOS ONE, is designed to incorporate physical habitat features important to stream ecology, including size, gradient, temperature, hydrology, valley confinement and substrate, into a composite map of stream diversity. An initial focus on the Eastern U.S. estimated over 5,000 stream types, most of which are rare and as many as one third affected by human impacts.

The ORNL-led team used geospatial datasets, remotely sensed information and predictive analysis to map approximately one million stream reaches across the Eastern U.S. At a stream-reach scale, the project is the first significant effort to produce a geospatial inventory of stream types at this scope.

Until now, stream classification has been largely regional, focused on evaluations of discrete stream segments rather than the entire length of branching river networks. The new classification system is designed to capture a connected landscape, wherein upstream water use influences downstream habitats supporting various ecosystems.

“This kind of holistic view of stream environments, specifically stream diversity, over a large spatial area has not been available and is essential to improving our understanding of natural and altered stream conditions,” said lead coauthor Ryan McManamay of ORNL’s Environmental Sciences Division and the Urban Dynamics Institute.

In their study of the Eastern U.S., researchers identified common and rare stream types and the extent to which these have been affected by human activities, such as urbanization, agriculture and energy production.

Combinations of the physical features yielded an estimated 1,521 total stream types. Out of 1.5 million total stream kilometers, 95 percent of the stream length comprised fewer than 30 percent of types. The finding suggests most stream types in the Eastern U.S. are rare.

Researchers compared land cover datasets with stream typologies to examine human-driven changes to natural stream environments. Introducing dams, reservoirs, agriculture and urban structures into riverscapes can alter streams’ physical features with adverse impacts to water resources and aquatic ecosystems. According to the coauthors, nearly 70 percent of streams in the Eastern U.S. “are either impounded, regulated, highly fragmented, or have significant landscape disturbances.” Thirty-two percent of stream types had at least 95 percent of their lengths impacted in some way, meaning 492 of 1,521 classes have no natural representation in the landscape. In other words, a third of stream diversity in the region has been lost. Results also showed rare stream types, especially large river systems, are more likely to be affected by human activity.

The team notes that the stream classification framework can be used to prioritize areas for conservation or restoration, while also assisting in mitigation planning. As a case study, researchers identified rare, highly altered stream types and targeted approximately 30,000 km of stream reaches across the Eastern U.S., or 1,463 km per state, for restoration projects. The study also showcased how stream classes can be used to identify shared properties among streams, so as to find reference streams or case studies to guide water management decisions.

“Our system is flexible,” said McManamay, “and can be combined with other high-resolution datasets to answer a range of big-picture questions about stream habitats and human-driven impacts to physical and biodiversity.”

The research was supported by the U.S. Department of Energy Office of Energy Efficiency and Renewable Energy, Water Power Technologies Office. The Urban Dynamics Institute, located at ORNL, is pursuing novel science and technological solutions for global to local urban challenges.

ORNL is managed by UT-Battelle for the DOE Office of Science. The single largest supporter of basic research in the physical sciences in the United States, the Office of Science is working to address some of the most pressing challenges of our time. For more information, please visit energy.gov/science. 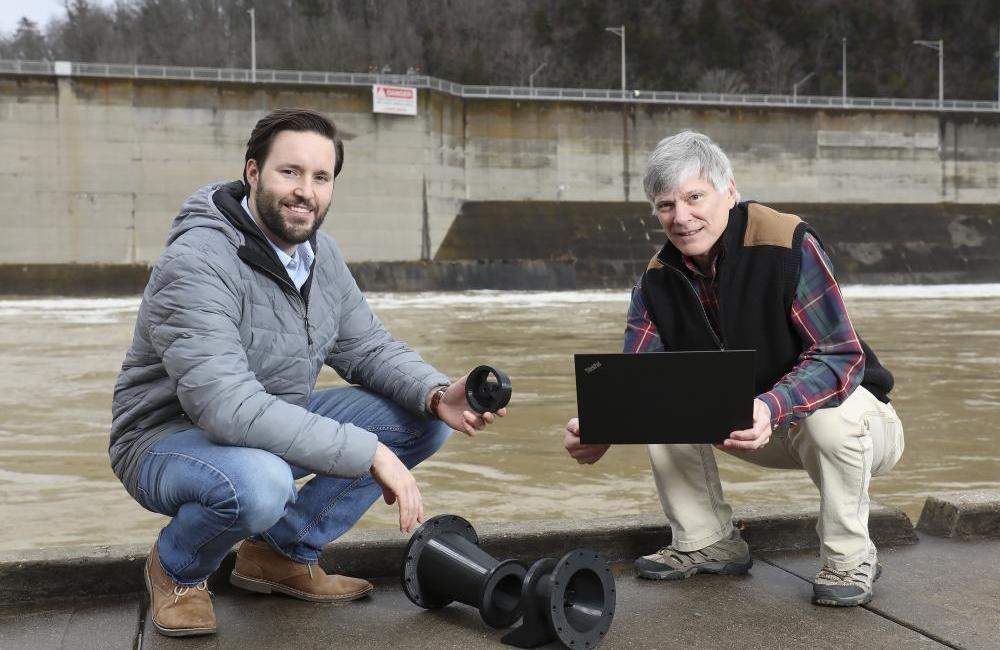 Harnessing the power of water is a practice that has been around for thousands of years, from the ancient Greeks’ use of waterwheels to grind wheat to today’s massive hydroelectric dams that supply power to millions of customers. But given the high price tag, potential environmental impact and difficulty of licensing large dams, the future of hydropower may shift to standardized projects with a smaller footprint, built with less customization and lower cost on a variety of waterways. That’s the future envisioned by Standard Modular Hydropower, a project at ORNL designed to accomplish much of the legwork for hydropower developers by identifying potential sites and helping inventors design affordable, functional systems that can be installed on smaller rivers and streams.

As a result, most of the new hydropower added in the past 20 years has been from upgrades to existing facilities or electrification of nonpowered dams. The goal of the SMH project is to kindle a renaissance of new hydropower, which now accounts for 6.5 percent of total electricity generation, making it the largest source of renewable energy in the country. The ideal SMH design would harness power from the natural flow of a river and have a capacity in the hundreds of kilo-watts up to 10 megawatts, with power supplied to a local utility system or transmitted directly to a nearby end user. Developers could be independent power producers, investor-owned utilities, electric cooperatives or municipalities.

SMH technology would be fully submerged in waterways, eliminating the need for a separate, large powerhouse for generators. The result would be unlike anything seen in conventional dam designs. Witt and his collaborators are hoping that by providing detailed information on waterways across the country, they will encourage inventors to create hydropower projects that are multipurpose, generating electricity while improving the health of the watershed.

Developers may search for a variety of characteristics, Bevelhimer noted. They may want to avoid waterways with migratory fish species so they don’t have to add fish ladders. Or they may seek out sites with poor water quality if their design provides the added benefit of aerating rivers with low levels of dissolved oxygen. A holistic understanding of river physics, ecological interactions, river resource use by humans and the regulatory process puts SMH in an excellent position to encourage future hydropower development, Bevelhimer added.