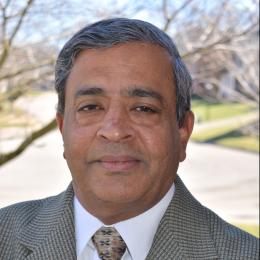 Dr. Venu Varma joined Oak Ridge National Laboratory in 1993 as a robotics engineer in the Remote Process and Systems Division. He received his PhD from the University of Maryland at College Park.

Dr. Varma has published in 50 journals, conference proceedings, and technical reports covering robotics, computer vision, automation, and design for remote environments. He is a member of ASME and IEEE. He holds two patents related to shape memory alloy actuators and sensors.

Since 2016, Dr. Varma has served ORNL as a group leader for the Remote Systems Group. He leads a staff of engineers, technicians, and designers in developing mechanisms for high radiation environments, among other projects.

Projects in which he has had a major role include:

Vacuum System and Modeling for the Materials Plasma Exposure Experiment