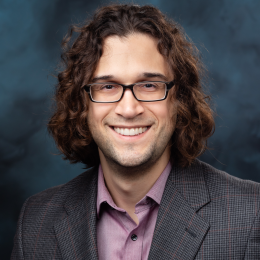 Sean Wilkinson is a Research Scientist in Large-Scale Data Science and Learning in the Data Lifecycle and Scalable Workflows Group at the Oak Ridge Leadership Computing Facility.

He earned a B.A. at Rice University in 2008 with a triple major in Computational and Applied Mathematics, Statistics, and Mathematics. He earned his Ph.D. in Biomedical Engineering from the University of Alabama at Birmingham (UAB) in 2015 while working at UAB Hospital in the Informatics Division of the Pathology Department. His work on web computing applications for bioinformatics most notably produced QMachine, a distributed computing platform that can use web browsers as compute nodes without installing anything.

Prior to joining ORNL in 2019, he was a postdoctoral fellow in the Physics Department at the University of Texas at Arlington, where he became an ATLAS Collaborator and a member of the BigPanDA project.

His research interests include distributed workflows, reproducibility, and HPC middleware.

Unveiling User Behavior on Summit Login Nodes as a User...

Official Report on the 2021 Computational and Autonomous Workflows Workshop (CAW 2021)...