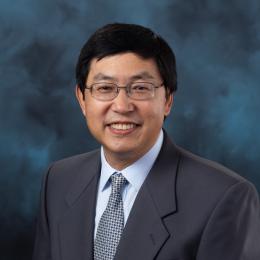 Dr. Li is the Leader for Scanning Tunneling Microscopy Group, and the Leader for Heterogeneities in Quantum Materials Theme in Center for Nanophase Materials Sciences (CNMS) division at the US Department of Energy’s (DOE) Oak Ridge National Laboratory. He received his Ph.D. degree in Condensed Matter Physics in Peking University in 1997 where his dissertation research emphasized the optoelectronic properties of nanomaterials. He then went to Max-Plank-Institute in Halle, Germany as a MPI Fellow to work on self-assembly of ordered nanostructures. In 1999, he joined the Center for Sensor Materials in Michigan State University as a visiting scholar to develop thin film growth of crystalline diamond.  After a brief stint in a start-up company, Galian Photonics in Vancouver, Canada trying to commercializing photonic crystal technologies, he came back to USA and joined the Oak Ridge National Lab in 2002. He moved through the ranks from Research Associate, Research Staff, to Senior Research Staff. In the meantime, he holds joint appointments with the Department of Physics and Astronomy of the University of Tennessee in Knoxville, first as a Adjunct Associate Professor and then a Joint Faculty Professor. An-Ping published many highly impactful papers in topics ranging from fundamental material science through condensed matter physics. Two of his papers have been cited more than 1,000 times each, and more than ten of his additional papers have been cited greater than 100 times each.

His primary interests have been the science-driven synthesis and the fundamental physical properties of low-dimensional and quantum materials. The research activities have involved in experimental determinations of structural, electronic, transport, magnetic, and optical properties for information and energy applications. Techniques employed are scanning tunneling microscopy (single-tip and multiple-tip), molecular beam epitaxy, self-assembly, and top-down nanofabrication.

1. Electronic and Transport Properties in Low-Dimensional Quantum Materials. He performs both STM and transport measurements on the same sample areas to establish the structure-transport relations down to the atomic scale. New methodologies, such as spin-polarized STM, scanning tunneling potentiometry, and scanning tunneling thermopower microcopy are implemented to probe electronic and spin density of states, electrochemical potentials and thermoelectric voltages on material surfaces.

2. Controlled Synthesis of Low-Dimensional Materials. He synthesizes 2D materials, thin films, and nanostructures, using chemical vapor deposition, molecular beam epitaxy, and a variety of bottom-up directed- and self-assembly processes. He then characterizes these materials and study their electronic, magnetic, optical, and transport properties.

3. Metal-Insulator Transitions and Electronic Inhomogeneity in Correlated Electronic Materials. He images and manipulates competing electronic phases near the critical transitional points of complex oxide, and examine the quantum transport in correlation with electronic instability, electron localization, Coulomb blockade in quantum material systems from mesoscopic down to the atomic scale.