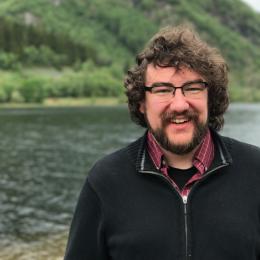 Michael is a Research Software Engineer with the Computational Earth Sciences Group and Climate Change Science Institute at Oak Ridge National Laboratory in Oak Ridge, Tennessee. His background is in atmospheric and climate sciences, with a B.S. in Meteorology from the State University of New York at Oswego, and M.S. and PhD from Cornell University in Ithaca, NY. Previously, he worked as a Postdoctoral Research Fellow at the University of Exeter in the United Kingdom.

He is currently involved in the ProbSLR effort to improve land ice models, working on the validation and verification. This involves nightly testing, as well as the comparison of model runs to observational data, using software in the Land Ice Verification and Validation Toolkit (LIVVkit). He also contributes to the E3SM project, working on climate reproducibility testing, which monitors if changes in the code of the climate model (which cause non bit-for-bit identical results) cause the climate of the model to change.

His previous research has focused on the links between tropospheric and stratospheric weather and climate. His dissertation was titled "Investigating the Link Between Sudden Stratospheric Warming and Tropospheric Blocking in the Northern Hemisphere", and has recently worked on the interaction between sea ice and mid-latitude circulation via stratospheric pathways.

Is the subtropical jet shifting poleward?...

Interseasonal Connections between the Timing of the Stratospheric Final Warming and Arctic Sea Ice...

Journal: Journal of Climate
view all