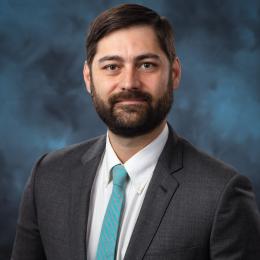 Mathew W. Swinney joined the Radiation Transport group in 2019 as an R&D Associate Staff member. He earned his B.S. in applied physics from Angelo State University in 2005 and a Ph.D. in nuclear engineering from Texas A&M University in 2015. He served as an officer in the USAF at both the Air Force Research Laboratory and the Air Force Institute of Technology from 2005 to 2010. Mathew did post-doctoral work at ORNL in the Nuclear Security Modeling Group and at the NASA Langley Research Center working on improvements to NASA's quality factor model designed to predict radiation exposure risk to astronauts. Dr. Swinney has conducted research in a variety of areas relevant to non-proliferation including nuclear forensics, safeguards/security, nuclear weapons effects, and consequence management. He has significant experience in the areas of radiation transport, Monte Carlo methods, radiation detection, and space radiation. Recently, he has investigated the consequences of criticality associated with the disposal of used nuclear fuel in a geological repository, predicted radiation doses to spacecraft components from galactic cosmic rays and the trapped radiation belts around Jupiter, as well as worked on developing a tool for automatically generating radiation transport geometries from scenes captured with Lidar technology.

The Sensitivity of Three Terrestrial Bacteria to a Multi-Mission Radioisotope Thermoelectric Generator...

Multiphysics modeling of a critical dual-purpose canister in a saturated geological repository...