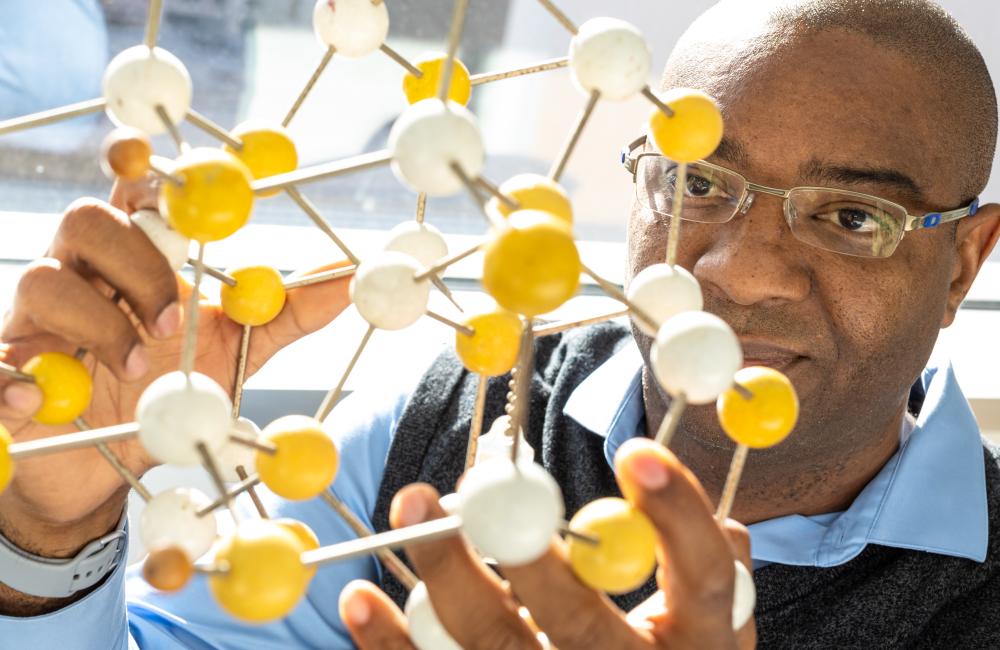 To understand the electronic structures of solids and predict their properties, ORNL’s Valentino Cooper uses density functional theory (DFT), which models how many electrons are in a region rather than where those electrons are. “DFT essentially presents one electron existing in a ‘sea foam’ and tells how dense that foam is,” he said. Credit: Carlos Jones/Oak Ridge National Laboratory, U.S. Dept. of Energy

“I’m trying to understand how materials respond down to the level of atoms and electrons—their basic building blocks,” said Cooper, who leads ORNL’s Condensed Matter Theory Group, which aims to understand complex electronic and magnetic behavior of solid systems of about 100 atoms.

He is also acting leader of ORNL’s Multiscale Theory Group, which focuses on small-scale phenomena producing larger-scale effects, such as the atomic defects that create cracks in the structural materials of a nuclear reactor or the dopant atoms that boost the performance of functional materials like superconductors and thermoelectric materials.

Growing up in Freeport in the Bahamas, Cooper was the eldest of three sons. His mother was a teacher, and his father, a priest. “Our mother instilled the need to educate ourselves and always pushed us to be better,” Cooper said. “Our father provided balance that helped us be more rounded—you can have fun in life.” Cooper’s father collected sayings to share in sermons. “My favorite was, ‘It’s not your aptitude but your attitude that will determine your altitude,’” Cooper said. “It’s a life lesson that it doesn’t matter how smart you are; it’s how you respond to things that will determine how far you’ll go in life.”

Young Cooper spent summers doing experiments from science books and upgrading the operating system of the family computer. He disassembled a clock radio to learn how it worked and built a “flying machine” from his bicycle and makeshift cardboard wings. He recalled his mother once exclaiming, “I can’t wait for school to start because you need to be in school!”

Cooper later attended the College of the Bahamas, planning to become a medical doctor. Making the Dean’s list landed him in a program that matched scholars with colleges in the United States. He left for Vassar College in 1996.

“A really great thing about Vassar is they pride themselves on diversity, so I got to interact with a lot of different types of people with different ethnic and religious backgrounds and very different opinions,” Cooper said. “It was eye-opening, but it was also very beautiful because all these different people were working together more or less harmoniously.”

Cooper’s academic adviser encouraged him to pursue science in graduate school. At the same time, Cooper concluded he did not have the passion for biology needed for med school.

“The way a material bonds is really by the electron interactions,” Cooper explained. “Every electron has a wave function. You want to understand how those wave functions connect to each other and build up the material properties.”

Wave functions were not the only connections that drew Cooper’s interest at this time. At Vassar’s Caribbean Students Alliance, he met a woman from Trinidad. “If you look at the chain of islands, the one that I’m from is the most northern and the one that she’s from is the most southern, so we should have never met,” he joked. The couple married in 2005, today lives in Oak Ridge, and has a daughter and son. Cooper’s wife, Danielle, is a Spanish teacher and award-winning author.

No scientist is an island

In 2000, Cooper received his bachelor’s degree in chemistry from Vassar and started PhD studies at the University of Pennsylvania in the Chemistry Department, working with Andrew Rappe to understand how an oxide surface influences the activity of the catalyst it supports and how to improve the responsiveness of piezoelectric materials, which convert mechanical stress to electrical energy, and vice versa. A postdoctoral fellowship followed in the Physics Department of Rutgers University with Karin Rabe, working on condensed matter theory, and David Langreth, developing DFT to explain long-range interactions in weakly connected layered materials.

Cooper joined ORNL’s Materials Science and Technology Division in 2008. Initially he worked with David Singh, a pioneer in electronic structure methods. In 2013, Cooper won one of DOE’s early career awards, which support exceptional researchers during the years when many do their most formative work.

His workdays have been full of collaborations with an archipelago of ORNL colleagues on topics from high-entropy oxides to perovskite ferroelectrics. Most evenings are spent evaluating papers as an associate editor of the Journal of Applied Physics.

As he develops advanced theoretical and computational tools to predict what materials can be synthesized, Cooper is especially interested in materials that would work under “device-relevant conditions.” He partners with ORNL’s Michael McGuire, who synthesizes and characterizes two-dimensional magnets, and Craig Bridges, who makes materials for batteries and solid-oxide fuel cells.

Cooper’s own passion is piezoelectric crystals. In ultrasound machines, they convert sound waves bouncing off a fetus, say, into electrical signals that create an image. In novel floor tiles, foot traffic can squeeze them to generate electricity. In a diesel engine, an electric current can change their shape to control the fuel-to-air ratio.

Supercomputers continue to help with this challenge and others. Through a DOE Innovative and Novel Computational Impact on Theory and Experiment allocation of supercomputing time led by ORNL’s Markus Eisenbach, for example, Cooper will use the Oak Ridge Leadership Computing Facility’s Summit to predict if a mixture of three or four different types of atoms will segregate into phases or unite to form an alloy.

Going from thought experiment to benchtop synthesis is no day at the beach. Cooper recalled his first conference, when a fellow scientist looked at his poster and complained, “You theorists are always predicting things that we experimentalists can’t make.”

Next Cooper wants to use machine learning to fill gaps in understanding. “The methods we’re using aren’t 100% accurate because we have to make an approximation that basically takes every electron and pretends like it’s interacting with a uniform background representing the average of all other electrons.”

Cooper wants to quantify uncertainty to improve the chances of achieving preferred material properties. “We’re trying to put error bars on DFT,” he said. “If we can predict what errors we expect to get using Approximation 1 versus Approximation 3, then we know which we should use to minimize that error across the whole data set. Then machine learning can better guide which approaches we use to look for answers about material properties.” 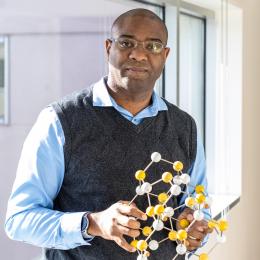