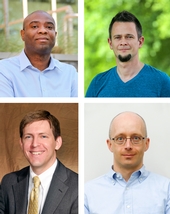 The program, now in its fourth year, is designed to bolster the nation's scientific workforce by providing support to exceptional researchers during crucial early career years when many scientists do their most formative work. This year's 61 awardees were selected from a pool of 770 university- and national laboratory-based applicants.

"This highly competitive program is a well-deserved recognition for early-career scientists who are launching their own research programs," ORNL Director Thom Mason said. "We are delighted that four of this year's awards are going to researchers associated with ORNL."

Valentino Cooper, from ORNL's Materials Science and Technology Division, was selected for his project "First Principles Predictions of Phase Stability in Complex Oxides."

Cooper's research will focus on developing theoretical and computational methods to predict and discover new complex perovskite oxide materials. These materials are already important in technologies such as high-resolution ultrasound machines and fuel injectors in clean burning and efficient diesel engines. The development of more responsive, lead-free materials may enable their use in new applications.

Gaute Hagen, a researcher in ORNL's Physics Division, was chosen for his project "State of the Art Microscopic Computations of Weak Processes in Nuclei."

Hagen's project aims to develop novel extensions of computational methods that address fundamental questions in physics such as "What is the nature of the neutrino?" and "What are the mechanisms for the production of elements heavier than iron?" By using computation to study weak nuclear decays, Hagen's research will enable predictions of properties of medium-mass, neutron-rich nuclei at a microscopic level. These advanced calculations will shed new light on the mechanisms behind weak decays and will be relevant for future experiments at laboratories worldwide.

The University of Tennessee's Jason Hayward, who holds a joint appointment in ORNL's Nuclear Security and Isotope Technology Division, received an award for his project "Neutron Scattering Instrumentation Research and Development for High Spatial and Temporal Resolution Imaging at Oak Ridge National Laboratory."

Hayward's proposal focuses on developing new detectors with increased spatial and temporal resolution to aid experimental research at high-intensity pulsed sources such as ORNL's Spallation Neutron Source (SNS). Success in this research will be transformational to neutron imaging, a powerful tool to investigate materials for such energy-related applications as fuel cells, energy storage, hydrogen storage and nuclear technology.

Matthias Schindler, a joint faculty appointee in ORNL's Physics Division from the University of South Carolina, was selected for his project "Hadronic Parity Violation in Few-Nucleon Systems."

Schindler's research aims to advance the study of hadronic parity violation, a phenomenon in physics that is still poorly understood despite several decades of experimental and theoretical effort. Recent progress on high-intensity neutron sources such as ORNL's SNS makes it possible to study parity violation in few-nucleon systems.

Under the program, university-based researchers will receive at least $150,000 per year to cover summer salary and research expenses. For researchers based at ORNL, where DOE typically covers the full salary and expenses of laboratory employees, grants will be at least $500,000 per year to cover year-round salary plus research expenses. The final details for each project award are subject to final grant and contract negotiations between DOE and the awardees.

UT-Battelle manages ORNL for the Office of Science. The Office of Science is the single largest supporter of basic research in the physical sciences in the United States and is working to address some of the most pressing challenges of our time. For more information, please visit http://energy.gov/science/.