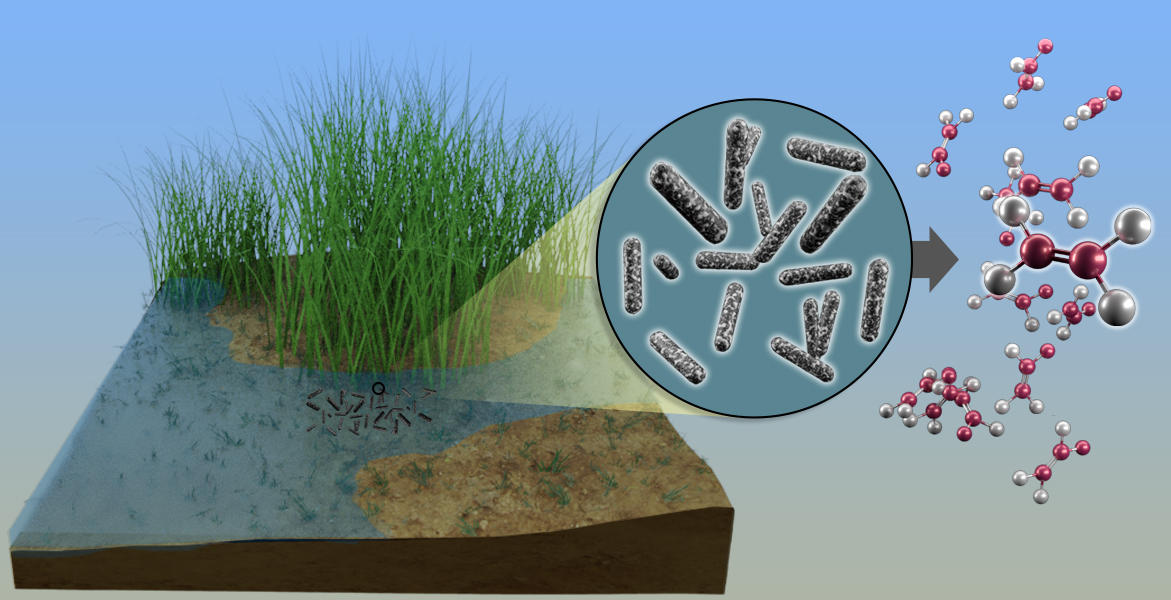 Scientists have discovered how microbes in waterlogged soils produce high levels of ethylene, which can adversely affect agricultural crops and bioenergy feedstocks like switchgrass. This new knowledge can be used to develop treatments for healthier crops. Credit: Andy Sproles/ORNL, U.S. Dept. of Energy

Scientists at the Department of Energy’s Oak Ridge National Laboratory and Ohio State University discovered a new microbial pathway that produces ethylene, providing a potential avenue for biomanufacturing a common component of plastics, adhesives, coolants and other everyday products.

The discovery, published in Science, sheds light on a long-standing mystery about how ethylene is produced in anaerobic, or oxygen-deprived, soils and points to potential paths to prevent crop damage from high levels of ethylene. The study also outlines a previously unknown way bacteria generate methane, a powerful greenhouse gas.

The research team found that ethylene and methane are byproducts of a bacterial process that makes methionine, an amino acid necessary for building proteins. When their environment is anaerobic and low in sulfur, bacteria are forced to scavenge sulfur from cellular waste products, triggering this new pathway.

“For about a decade, researchers have studied the biological production of ethylene through a different mechanism that occurs in oxygenated environments,” said Ohio State research scientist Justin North. “There is a technical hurdle to scaling up that process as ethylene and oxygen mixed at industrial scales could be explosive. This new anaerobic pathway clears that hurdle, but there is still work to do in scaling it up.”

The research began at Ohio State where Robert Tabita leads an ongoing study of carbon fixation and nitrogen and sulfur metabolism in photosynthetic bacteria. As part of Tabita’s team, North decided to measure the gasses being consumed and emitted by Rhodospirillum rubrum and other microbes in the same family when they were starved for sulfur. He was surprised to detect ethylene.

“We know these bacteria are producing hydrogen and consuming carbon dioxide,” North said. “But, lo and behold, they were making copious amounts of ethylene gas. And we thought, well, that's weird.”

North and his Ohio State colleagues studied this new metabolic process using radioactive compounds to track the precursors and the production of methionine and ethylene in microbes. But a different type of analytical biotechnology was needed to make the critical link between the pathway and the proteins called enzymes that drive it. 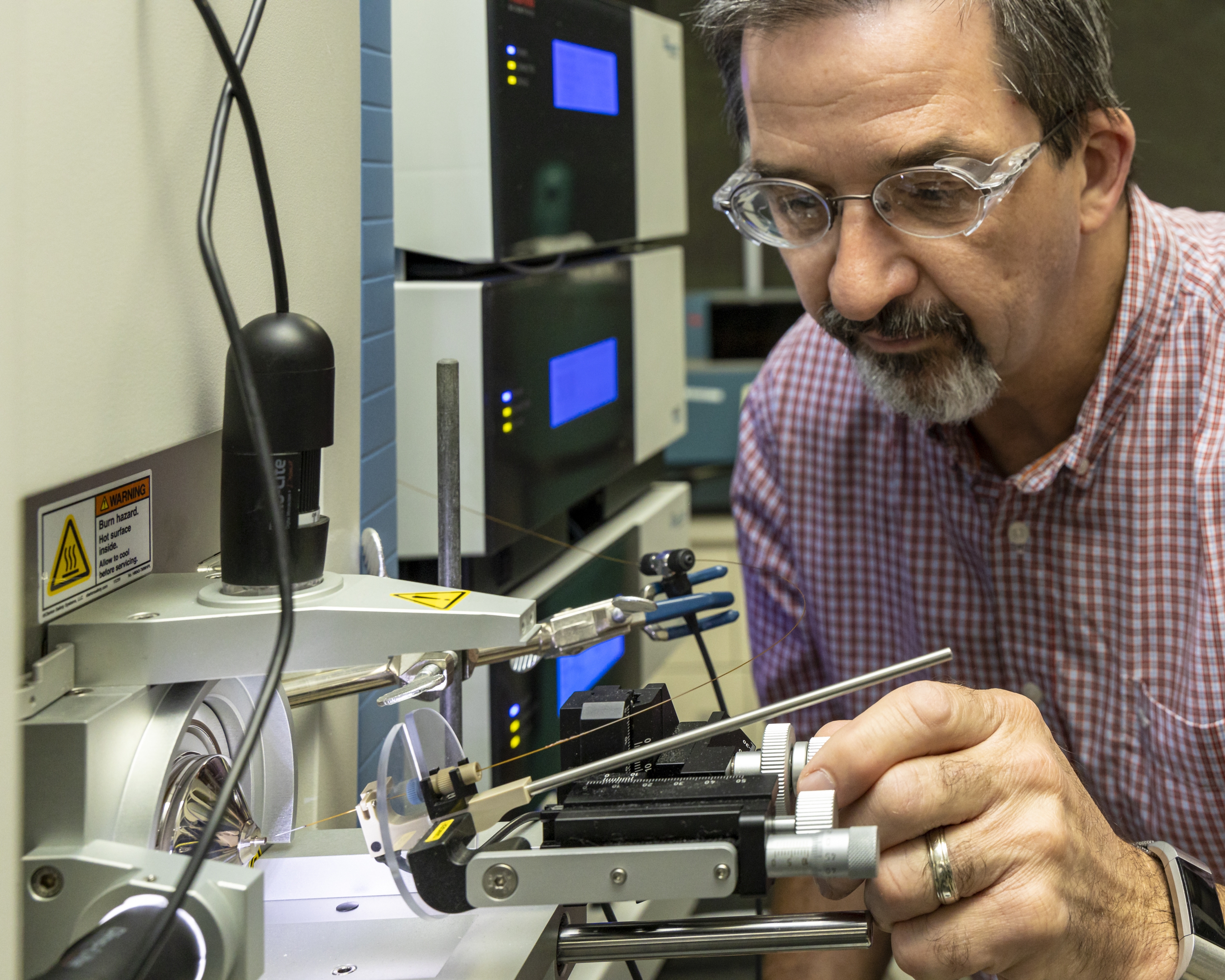 Tabita reached out to Bob Hettich, who leads the Biological Mass Spectrometry Group at ORNL, for a comparative analysis of the collection of proteins, called proteomes, present in these photosynthetic bacteria under two different scenarios: low-sulfur, ethylene-producing conditions and high-sulfur, non-ethylene-producing conditions. Hettich’s group has developed a cutting-edge approach to characterizing the proteomes of microbial systems using mass spectrometry, a technique that accurately measures the masses and fragmentation pathways of different molecules and provides details on structure and composition. Hettich and Weili Xiong, an ORNL postdoctoral researcher, identified thousands of proteins from the low- and high-sulfur systems and analyzed their comparative abundances to pinpoint a handful of proteins for further characterization.

“We found striking differences,” Hettich said. The data showed a family of nitrogenase-like proteins that were almost 50 times more abundant in the low-sulfur, ethylene-producing samples. Some iron- and sulfur-related proteins also increased in abundance when sulfur was scarce, pointing to a possible new pathway for sulfur metabolism. 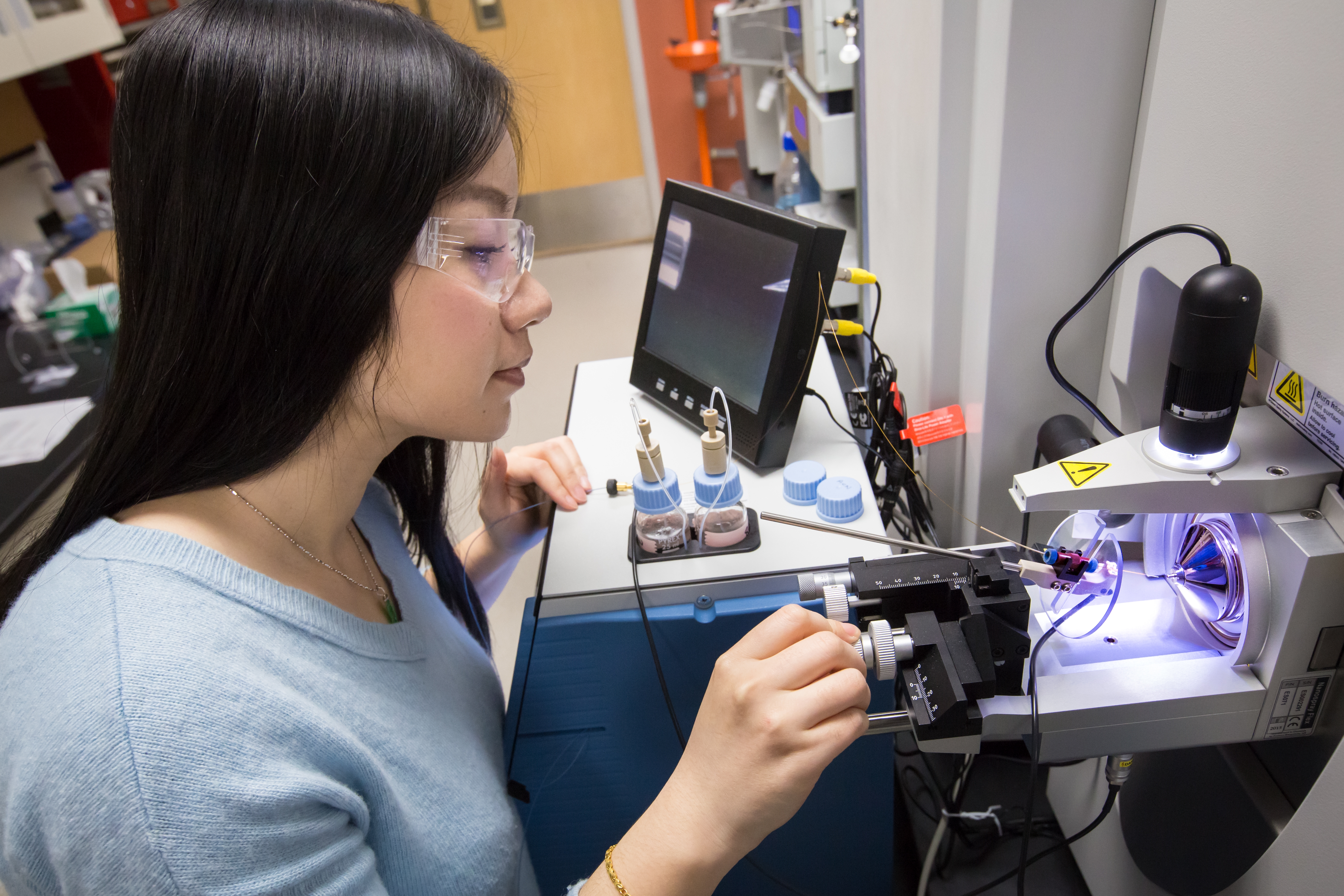 Weili Xiong collaborated on the mass spectrometry research while at ORNL as a postdoctoral associate. Credit: Carlos Jones/ORNL, U.S. Dept. of Energy

These data were surprising as nitrogenase-like proteins are grouped in gene annotations with nitrogenases that have similar DNA sequences and are known to convert atmospheric nitrogen to ammonia. This nitrogen fixation process is essential to life on earth and has been studied extensively. Given their name, these nitrogenase-like proteins are not ones the scientists would have guessed play a role in sulfur metabolism.

“Sometimes the naming or annotation of a gene or gene family can be misleading,” Hettich said. “The name suggests a primary function. In fact, the gene might have a secondary function, a night job so to speak, or it might actually be doing something completely different.”

“But the data are the data,” he continued. “If you run the measurements correctly and in an agnostic fashion where you don't know the answer a priori, then the data will reveal the real connections.”

With these crucial proteome data, Ohio State researchers and colleagues at Colorado State University and Pacific Northwest National Laboratory ran a series of experiments manipulating the bacterial genome to include or remove the gene cluster Rru_A0793-Rru_A0796. The gene removal and replacement turned off and on the ethylene production like a switch, confirming that the genes and the resulting enzyme they code for are essential to this metabolic pathway.

The nitrogenase-like enzymes cleave carbon-sulfur bonds to reduce 2-(methylthio)ethanol into a precursor for making methionine. This pathway produces ethylene as a byproduct. The research team found that if the source of sulfur is changed to dimethyl sulfide, the most abundant volatile organic sulfur compound, bacteria use it in their methionine pathway and produce methane as a byproduct.

In addition to a potential biological means of producing ethylene for use in plastics and other industrial products, these findings could inform treatments for crops in waterlogged, anaerobic soils to prevent damage from an overabundance of ethylene. In the right amounts, ethylene is an important plant hormone that helps plants grow, develop leaves and roots and ripen fruits. This study creates a host of new scientific questions, including whether this pathway is involved in interactions between plants and microbes.

“It's very exciting that this discovery is leading into new lines of inquiry that may actually have some substantial benefit to agricultural and other crops as well,” North said. 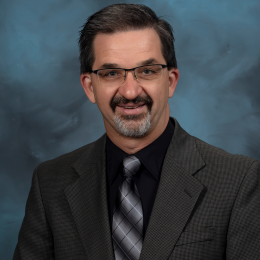