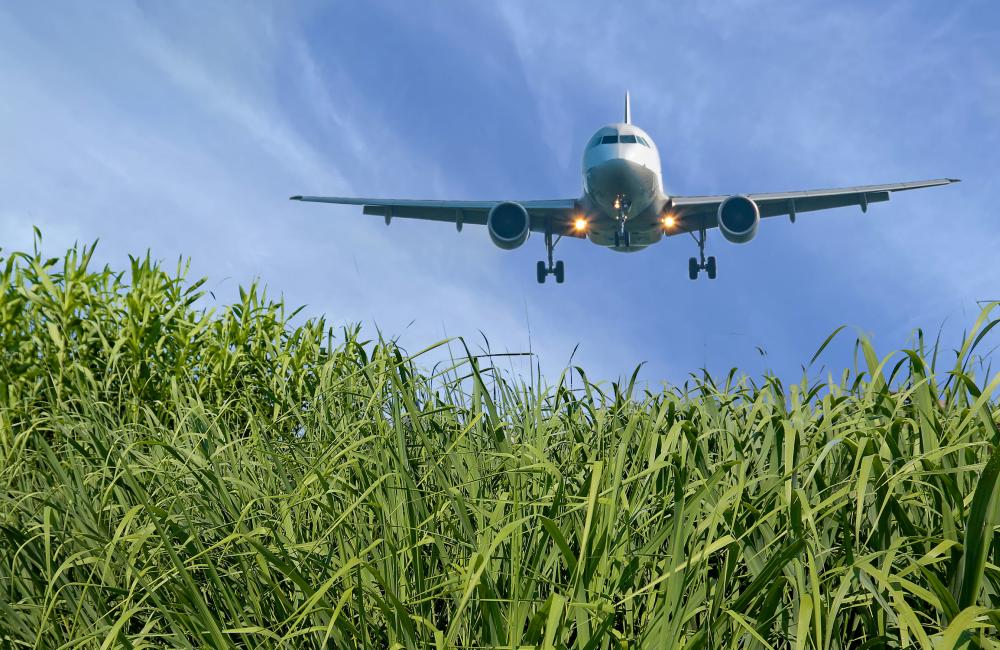 Scientists with the Center for Bioenergy Innovation at ORNL highlighted a hybrid approach that uses microbes and catalysis to convert cellulosic biomass into fuels suitable for aviation and other difficult-to-electrify sectors. Credit: ORNL, U.S. Dept. of Energy

The rapid pace of global climate change has added urgency to developing technologies that reduce the carbon footprint of transportation technologies, especially in sectors that are difficult to electrify. In response, researchers collaborating through the Center for Bioenergy Innovation make the case that scientific advances support a hybrid approach using biological and catalytic methods for producing cellulosic biofuel for use in airplanes, ships and long-haul trucks.

As presented in Energy & Environmental Science, this hybrid approach uses microbes to convert cellulosic biomass such as wood and grass into an intermediate, small-molecule product such as ethanol. The ethanol would then be catalytically upgraded into hydrocarbon fuels suitable for heavier vehicles.

“We’re looking at this as taking the best of both worlds: Using biology for what it really does well, which is to make these small molecules, and then using catalysis to do what it does well, which is to make hydrocarbon fuel mixtures rapidly,” said Brian Davison, co-author and chief science officer for CBI, headquartered at the Department of Energy’s Oak Ridge National Laboratory.

Lee Lynd, an engineering professor and adjunct biology professor at Dartmouth College, who co-led the study with Gregg Beckham at the National Renewable Energy Laboratory, said the field has previously focused on a two-step process of pretreating biomass with heat and/or chemicals before biological processing. This paper is one of only a few that have sought to refine a different approach: biologically creating small molecules, then mechanically disrupting the cell walls during fermentation and introducing a catalyst to create hydrocarbon fuels. This approach is more affordable than producing large fuel molecules directly using microorganisms, Lynd said.

Unlike chemical pretreatment approaches that degrade lignin, the tough polymer that gives plants their structure and rigidity, this method preserves something closer to the lignin’s original structure. As a result, lignin residues can be more easily converted to other products, rather than being unfit for anything but burning, Davison said.

“Sometimes it’s important to go back to basics like this paper does,” said Jim Bielenberg, a senior research associate at ExxonMobil Research and Engineering who closely follows biofuel product research. “We’ve taken a run at cellulosic biofuels, and the cost and performance of those technologies didn’t seem to land where it got a lot of traction. Maybe it’s time to really fundamentally rethink the steps.”

The path to cellulosic biofuels

Converting sugars from plant cell walls into liquid fuels is widely recognized as a cornerstone of the bioeconomy and a key to achieving a transportation system that is carbon-neutral or carbon-negative. Perennial cellulosic feedstocks cost less than petroleum and are widely available and renewable.

Cellulosic biofuel has another advantage over starchy feedstocks like corn. Because corn needs nitrogen fertilizer and water, the carbon advantage provided by starch-based ethanol is questionable, Bielenberg said. Ethanol made from trees and grasses would offer a much bigger carbon benefit. “One of the big levers you have is using the right feedstock,” he added.

This paper highlights the potential of ethanol as a key intermediate that can be processed to create desired hydrocarbon fuels, Davison said. With that goal, “we are making the best molecules biologically that we know can be converted by catalysis.”

A variety of methods have been tested to catalytically convert these intermediate products in reactors that are relatively small and affordable. Although meeting aviation and diesel engine needs will require further advances, those advances are not far off.

“If we were able to get cellulosic ethanol today, we have standard refinery processes to get us the rest of the way to what we want,” said Bielenberg.

“We are much closer to being able to make ethanol from cellulosic biomass than any other liquid fuel or fuel intermediate,” added Lynd.

For light-duty vehicles, the focus is shifting to electrification as the preferred approach to reducing emissions that affect climate. However, Lynd said, “about half of future transportation energy requirements are difficult to electrify — like aviation, long-haul trucking and ocean shipping. We need negative emissions to stabilize climate change. Photosynthesis is the best option for capturing carbon dioxide from the air so we can put it in the ground. Biofuels have outstanding, and likely underestimated, potential in this context.”

The aviation industry has been developing a decarbonization strategy for more than 15 years, said Steve Csonka. He is executive director of the Commercial Aviation Alternative Fuels Initiative, a coalition of airlines, aircraft and engine manufacturers, energy producers and others pursuing alternative jet fuels.

Csonka said the aviation industry has focused on low-carbon fuels that could replace petroleum-based jet fuel. To be viable, these fuels must be affordable without requiring special infrastructure or modifications to airports and planes. Alternatives under development, such as hydrogen-powered aircraft and electric-hydrogen hybrids, don’t meet these requirements and are unlikely to be useful for large planes any time soon, Csonka said.

The International Air Transportation Association has committed to net zero carbon by 2050, and several airlines have made even more stringent commitments. “Realistically, the only way we’re going to get there is with the introduction of sustainable aviation fuels from multiple sources,” Csonka said.

Although he does not endorse any one type of feedstock or process, Csonka said the biological/catalytic combination selected in the study makes economic sense: Both steps require less capital investment than other methods.

Bielenberg said the study provided an unusual big-picture view to researchers and industry. “The lens they use is a really valuable one, because rather than being focused on a specific approach, they’re trying to understand any technical approach through the lens of carbon efficiency — so you make sure your efforts are going in the right direction,” he said. “I think this paper does a good job of framing problems in such a way that you're sure you're working on something that's worth solving.”

The Center for Bioenergy Innovation at ORNL is one of four Department of Energy Bioenergy Research Centers focused on advancing biofuels and bioproducts for a vibrant domestic bioeconomy. CBI is accelerating the development of bioenergy-relevant plants and microbes to enable production of drop-in sustainable aviation fuel, bioproducts that sequester carbon indefinitely, and sustainable replacements for plastics and other environmentally harmful products. CBI research is supported by the Biological and Environmental Research program in DOE’s Office of Science.

UT-Battelle manages Oak Ridge National Laboratory for DOE’s Office of Science, the single largest supporter of basic research in the physical sciences in the United States. DOE’s Office of Science is working to address some of the most pressing challenges of our time. For more information, visit energy.gov/science. — S. Heather Duncan