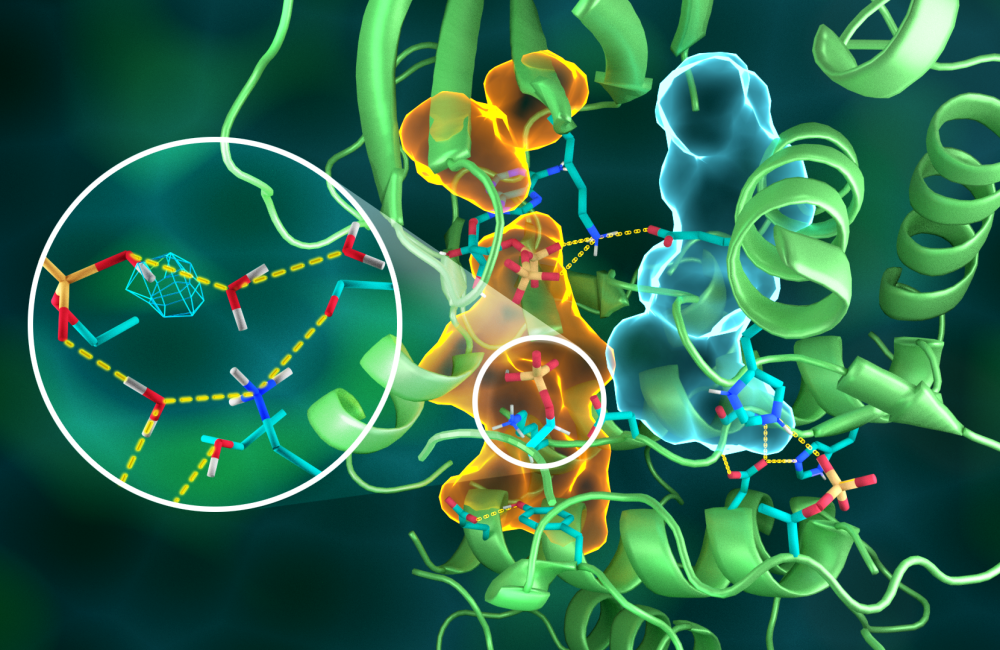 Illustration of the intricate organization of the PKA structure, wherein different parts of the protein are connected through elaborate hydrogen bonding networks (dashed yellow lines), glued together by the hydrophobic assemblies (light blue and orange volumes)—all working together to build the functional active site. Insert shows protonation of the transferred phosphoryl group (cyan mesh) and its many interactions with water and the active site amino acid residues. Credit: Jill Hemman/Oak Ridge National Laboratory, U.S. Dept. of Energy

OAK RIDGE, Tenn., March 20, 2019—Direct observations of the structure and catalytic mechanism of a prototypical kinase enzyme—protein kinase A or PKA—will provide researchers and drug developers with significantly enhanced abilities to understand and treat fatal diseases and neurological disorders such as cancer, diabetes, and cystic fibrosis.

The discovery was made by an international team of researchers using macromolecular neutron crystallography at the Department of Energy’s Oak Ridge National Laboratory and the Institut Laue-Langevin in Grenoble, France. Building on a decade-long investigation, the combined efforts revealed previously unknown characteristics of the archetypal protein kinase, including a complete map of the atomic structure and the underpinnings of the enzyme’s chemistry used in cellular signaling. The details are published in the journal Science Advances.

Kinases are a large group of hundreds of enzymes responsible for initiating and regulating myriad cellular processes. Kinases send signals to proteins by way of phosphorylation—adding a reactive chemical group consisting of phosphorus and oxygen to a specific location on a substrate protein to activate its specific biological function.

Problems arise when gene mutations cause kinases to work improperly, which in turn leads to disease. A malfunctioning kinase, or one that can’t be deactivated, could be responsible for the overexpression of proteins that lead to the uncontrollable propagation of cancer cells. The opposite is also true in neurological disorders in which a malfunctioning kinase simply causes cells to die.

“Creating drugs that target specific kinases is extremely important,” said co-author Andrey Kovalevsky. “This detailed understanding of the PKA structure and its dynamics will tell us more about other kinds of kinases and should help drug developers design new drugs with better specificity, which would ultimately translate to more precise therapeutics with fewer side effects.”

Neutrons are uniquely sensitive to light elements such as hydrogen. Because approximately 50 percent of all atoms in proteins are hydrogen, and most of the chemical reactions that enzymes catalyze involve hydrogen, neutrons are an ideal and unsurpassed probe for detecting the positions of hydrogen atoms within the protein structure and tracking their movement during catalysis.

Neutron diffraction using the IMAGINE diffractometer at ORNL’s High Flux Isotope Reactor, a DOE Office of Science User Facility, and the LADI-III diffractometer at ILL enabled researchers to see the exact positions of hydrogen atoms to reveal the complete kinase structure as well as the protonation states of all amino acids in PKA and the ligands bound to its active site, many of which were previously unknown.

“Neutrons enabled us to validate x-ray predictions of hydrogen atom positions, as well as determining the protonation states of chemical groups that were not known, or in places where we didn’t expect to find them. This major chemical advance paves the way for more sophisticated molecular modeling and simulation studies of protein kinase structure and function,” said corresponding author Susan Taylor.

“Neutrons offer an unprecedented view of the hydrogen bond network surrounding and within the active site of PKA and give crucial insights on how allosteric transmission of information through the protein structure occurs,” added co-author Gianluigi Veglia. “Combining neutron crystallography with nuclear magnetic resonance spectroscopy will provide a comprehensive understanding of how enzymes work.”