Mechanical engineer Marm Dixit’s work is all about getting electricity to flow efficiently from one end of a solid-state battery to the other. It’s a high-stakes problem: The future of electric vehicles, among other key green technologies, rides on the ability of him and other scientists and engineers to create high-energy density battery designs that are practical, safe, recyclable and affordable.

A slew of challenges lies between Dixit, a Weinberg Distinguished Staff Fellow at Oak Ridge National Laboratory, and this goal. It’s one thing to experiment with solid anodes, cathodes and electrolytes and get battery designs to work. It’s another to design a battery that can both outperform today’s liquid lithium-ion batteries and, with an eye to industry, be efficiently mass produced.

“Our approach from the beginning has been, ‘Let's try and build something that's practical,’” said Dixit.

This highly competitive research area is hotter than a short-circuited battery, and Dixit and his colleagues in the lab’s Emerging and Solid-State Batteries group have been working hard to overcome the many technical hurdles. These “beasts,” as Dixit calls them, demand novel, creative thinking. Luckily, that’s something this published poet, avid reader, accomplished flautist and clever cutup offers in spades.

Generally, the lithium-ion batteries in mobile phones, electric cars and laptops have done the job. But they came with a downside: flammable electrolytes that can lead to fires or explosions. Now, after decades of development, the technology seems to have reached a peak, priming the market for a new type of battery to meet the world’s growing demand for low-carbon transportation.

Indeed, solid-state batteries promise to charge quicker, last longer and operate more safely. A commercially successful solid-state battery should have an energy density nearly twice that of lithium-ion, Dixit said. Currently, researchers are reporting performances that are, at best, roughly equal to that.

“Solid-state batteries should improve on current lithium-ion battery,” Dixit said. “Otherwise, there is no point.”

In his crowded field, Dixit said battery startups are plentiful. Many researchers are narrowing in on specific issues, including the various problems that can surface at the electrode–electrolyte interface. For example, dendrites can emerge from metal lithium anodes and, drill-like, penetrate the electrolyte.

“I have a Google Scholar alert for solid-state batteries,” Dixit said. “Every day I'll get 20 papers, and the titles are quite varied.”

For Dixit, who was awarded a Toyota Young Investigator Fellowship for Projects in Green Energy Technology from the Electrochemical Society last year, the focus is to “de-risk” battery designs and shepherd them to the point where industry feels confident running with them.

And with a powerful tool he developed and released in February, Dixit is empowering others in his field to do the same.

“You put in what you think your configuration looks like, and it will tell you, theoretically, this is the best that it will do,” Dixit said. “It’s basically an estimate as to the bounding limits of your performance in terms of energy density.”

Based on parameters such as materials and design architectures, a researcher using SolidPAC can get an idea of how her brainchild, if realized, would perform. It can also shed light, based on specific design inputs, on what needs to be tweaked to attain a target energy density.

SolidPAC was the gadget battery researchers didn’t know they needed. Within days of publishing a paper on it, Dixit began hearing from researchers around the world who were already using it and wanted more information.

“That's the best part,” Dixit said. “This is one of those papers that people can actually use.”

It’s the kind of scientific tinkering Dixit has been doing since he was a kid hanging out at community science centers in his native India. Eventually that tinkering led to bachelor’s and doctorate degrees in mechanical engineering, the latter from Vanderbilt University. After a series of research positions in India, at Vanderbilt and at Argonne National Laboratory, Dixit settled at ORNL last year.

At every step, Dixit has been accompanied by his flute — he plays in the classical Indian tradition — his favorite novels and a powerful imagination that inspires science-flecked poems probing life’s emotional, physical and spiritual mysteries. For Dixit, the arts offer a way to recharge batteries, so to speak, depleted by long, intense focus on science puzzles.

“You spend a week doing a lot of experiments that probably didn't work,” he said with his characteristic dry, self-deprecating humor. “But then you sit down and read a book, or write something, or play something. And the next week you go out and you figure out what might have gone wrong. So, it loosens up the gears.”

Those creative juices seem to be doing a good job keeping Dixit’s gears well oiled. He and colleagues are successfully developing ways to process hard-to-handle lithium metal anodes at scales relevant to industry, work he hopes will soon bear fruit. “That's something we are super excited about,” he said. He is also excited about their current work developing electrolyte materials with impressive conductive properties. These are all important steps, he said, to making solid-state batteries that are both technically and economically feasible — a feat with huge ramifications for the planet.

“The field in and of itself is exciting,” Dixit said. “It proposes to solve a lot of the problems of the world, and that is a big motivator.”

UT-Battelle manages ORNL for the DOE’s Office of Science, the single largest supporter of basic research in the physical sciences in the United States. The Office of Science is working to address some of the most pressing challenges of our time. For more information, please visit energy.gov/science. — Kristen Coyne 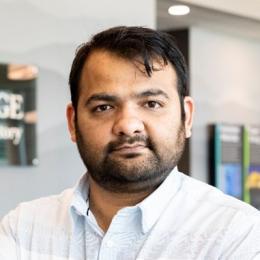