Spanning no less than three disciplines, Marie Kurz’s title — hydrogeochemist — already gives you a sense of the collaborative, interdisciplinary nature of her research at the Department of Energy’s Oak Ridge National Laboratory. Still, those six syllables only hint at the vast web of relationships encompassed in her work.

Kurz studies how rivers flow through landscapes; what kinds of nutrients, contaminants and other material sail through them; and how they transform along the way. As an experimentalist, her favorite part of the job is getting into the field. Depending on the season, Kurz can be found clad in tights, gloves reaching her shoulders, a neon vest and a ponytail-taming cap as she sloshes in olive hip waders through the particular stream under her scrutiny. The getup, she said, always makes her feel a bit like the Michelin man.

After setting up measurement equipment along a kilometer or two of stream, checking and re-checking calculations and calibrations, the fun part comes. From her perch on the bank, she upends two big buckets of non-toxic dye into the water — one purple, the other neon green — transforming the waterway into a vibrant, dynamic tableau. The dyes meld into a bright, leaf green, taking on new patterns as the water swirls, seeps and eddies.

“You’ve made the invisible visible for that short window of time,” Kurz said. “It’s fun to be able to actually see it.”

The scene is an apt metaphor for her life as a scientist. Kurz’s career, built on collaborating with experts from other fields and regions, has landed her everywhere from the creeks of Oregon’s Cascade Mountains to the karst springs of North Florida, from the vast Delaware River to forest streams in northern Germany. Now, after joining ORNL last fall, Kurz gets to dip a rubber-shod toe into the Tennessee River watershed, working with world-leading modeling experts and other scientists to build on decades of data on one of the world’s most intensively studied waterways.

“I’ve always been drawn to the large, collaborative initiatives,” Kurz said. “It’s where I get a lot of my motivation and stimulation.”

As an outdoorsy kid, Kurz’s stomping grounds were as diverse as her path as a scientist. A self-described “astronomy brat,” she followed her physicist dad and astronomer mom from one observatory to another, roaming through California canyons, exploring Arizona arroyos, then later wandering through the alpine foothills of Germany.

While the surroundings changed, her way of interacting with them never did: Thanks to her parents, the scientific method was a way of life.

“I was always inquisitive, asking, ‘Why is this rock here? Why is that mountain shaped like that?’ And they’d encourage me to look for answers,” Kurz recalled. Science was personal and practical.

She majored in geology at the College of William & Mary as an undergraduate. The field took a practical, “problem-first” approach, which resonated with her. “I've always been drawn to the more applied research side of things,” Kurz said, “to having a clear definition of, ‘Why am I studying this? Why is it important — especially societally?’”

As she pursued graduate work at the University of Florida, the answers to those questions became clearer: There were plenty of problems hiding in the waters of the world, including mercury released from coal-fired power plants; PFAS chemicals (also known as “forever chemicals”) originating from sources such as takeout boxes and firefighting foam; and excess nitrogen and phosphorous from fertilizers.

Kurz continued her studies as a doctoral student, learning just how intertwined the myriad factors relating to stream health actually are. Her thesis focused on the filamentous algae that had overtaken many Florida springs by that time. Conventional wisdom held that excess nutrients from fertilizer runoff had caused the algae to run amok, but the research group she belonged to at UF found evidence that multiple processes were in play. Kurz’s research revealed that increased iron levels were one factor likely contributing to the growth. The group’s findings could help watershed stewards better understand how to save the springs.

“This world is so amazingly complex,” said Kurz, “and most solutions — especially to these complex problems like climate change, degraded water quality and loss of biodiversity — are as complex as the problem, if not more.”

Kurz’s primary tools for probing these complexities are her colorful tracers. The green is her “non-reactive tracer,” and corresponds to the “hydro” part of her title. The same fluorescent green concoction used to give the Chicago River a shamrock hue every St. Patrick’s Day can be used to measure the water’s highly variable flow. It shoots swiftly down the middle of the waterway but takes several minutes to appear in the shallow margins. Along the edges of waterways and in the sediments below — areas known as transient storage zones — the flow is hampered by nooks and crannies, debris and rocks where water can linger.

Those are the spaces targeted by Kurz’s purple dye. This “reactive” tracer is used to gauge the amount of cellular respiration at different points in a stream. That measurement tends to be higher in certain transient storage zones where microbes are active. Microbes play a critical role in transforming nutrients and contaminants that wash into waterways. They turn mercury, for example, into the much more toxic methylmercury, which then makes its way up the food chain.

Examining the effects of mercury cycling has long been an area of expertise at ORNL. The Y-12 National Security Complex used mercury for weapons development in the 1950s and 1960s, and mercury contamination ended up in the surrounding environment. That included East Fork Poplar Creek, which originates at Y-12 and flows through the city of Oak Ridge. ORNL has collected data on the 23-kilometer long creek since the 1950s and for the past decade through its Critical Interfaces Science Focus Area, which is sponsored by the Biological and Environmental Research program in DOE’s Office of Science.

Over that time, ORNL has developed extensive expertise in disciplines related to this effort, including biogeochemistry, hydrology, microbiology and watershed modeling, said Eric Pierce, director of the lab’s Environmental Sciences Division. But perhaps even more importantly, ORNL has created an environment where a diverse team of specialists can piece together the elaborate puzzle of how these systems operate, each contributing unique insights.

“Having people from different scientific disciplines bring their talents to understand the stream — whether it's fish community population, whether it’s microbial community populations, whether it's [remote sensing] data of the tree canopy, hydrology data, water chemistry measurements — that's rare,” Pierce said. “And we have that in East Fork Poplar Creek. It's the synthesis of all of that data that allows us to gain insights on not just our system, but other systems outside Oak Ridge.”

Pierce plans to expand beyond the East Fork Poplar Creek stream corridor to study the entire watershed and provide an even fuller understanding of the system’s complexity.

Kurz is the latest expert to join this long-running ORNL effort. She has arrived at a time when watersheds are facing new pressures, including increased development and more frequent and intense rains, causing more flooding and erosion. All these factors will impact how watersheds store, process, transport and discharge materials.

Kurz is clearly cut out for the work: “Fun” is her go-to adjective when discussing her job. But it’s the potential impact of her research that really drives her. What she and her colleagues learn in a modest Tennessee tributary can be leveraged to understand and help protect watersheds around the world.

“Once you have that understanding, you can apply it to different places, to different problems,” Kurz said. “That's to me the perpetual challenge that keeps me going.”

UT-Battelle manages ORNL for the Department of Energy’s Office of Science, the single largest supporter of basic research in the physical sciences in the United States. The Office of Science is working to address some of the most pressing challenges of our time. For more information, please visit energy.gov/science. — Kristen Coyne 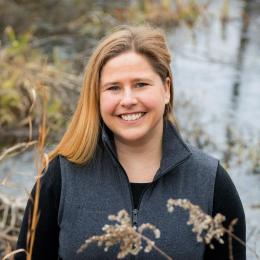