Kashif Nawaz: Redesigning building equipment for carbon capture and beyond

When Kashif Nawaz looks at a satellite map of the U.S., he sees millions of buildings that could hold a potential solution for the capture of carbon dioxide, a plentiful gas that can be harmful when excessive amounts are released into the atmosphere, raising the Earth’s temperature.

A mechanical engineer who leads the newly formed Multifunctional Equipment Integration Group at ORNL, Nawaz is designing a carbon capture platform for incorporation into existing rooftop heating and air conditioning units on commercial and residential buildings. With an estimated 120 million buildings dotting the landscape of the nation, it’s no small invention if Nawaz’s approach fully demonstrates its viability over the next few months.

Focused on direct air capture, Nawaz’s research represents what he calls a shift in how the scientific community has traditionally thought about ways to manage carbon dioxide emissions, whose climbing levels have the potential to upset the delicate balance of ecosystems, contributing to extreme weather patterns and crop loss.

“We know that carbon dioxide levels aren’t decreasing and we’re beginning to see the effects,” Nawaz said. “Providing an economical, easy-to-implement solution to mitigate it is perhaps the greatest challenge we’ve faced in our lifetime.”

Traditionally, scientists have looked at capturing carbon emitted from a specific source, such as the gases from coal power plants. Nawaz, however, is focused on taking it out of a source that’s constantly around us every day — the atmosphere.

“My idea is to leverage something that already exists to solve a global problem and extract the carbon from the air — a source you can’t directly see like an industrial application,” he continued. “We know that more than 10 million rooftop heating, ventilation and air conditioning units exist in the U.S. that can be retrofitted with carbon capture capabilities. Eventually, my vision is this can be extended to residential platforms as well. The possibilities aren’t far from being reality.”

The ability to problem solve comes naturally to Nawaz and is a theme that’s interwoven throughout his personal and professional history. Growing up in Pakistan, Nawaz was an academic achiever as early as elementary school. During a standard matriculation exam in later years, his skills were proven to be exceptional. Out of more than 48,000 students taking the exam, Nawaz scored at the top.

He went on to pursue undergraduate studies in mechanical engineering in his home country and after completion, was recommended by an advisor to continue his education in the U.S. by enrolling at the University of Illinois at Urbana Champaign, or UIUC, where he earned his doctorate in 2013. After graduation, Nawaz joined the university’s Air Conditioning and Refrigeration Center as a graduate research assistant, where he became interested in how to develop better energy conversion solutions and researched cooling technology for moisture management.

“I wanted to understand energy generation and how advanced process controls and equipment design can be developed to increase comfort, improve efficiency and affordability,” he said. “It was here that I began looking at applied heat and mass transfer and next generation heat exchangers.”

“For example, I discovered that a surface area metal foam can revolutionize the design practices for heat exchangers,” he said. “Complex structures can enable a highly compact design without compromising the efficiency, and many of these innovations are inspired by nature.”

It’s these type of possibilities Nawaz went on to investigate when he took on a professional role in the corporate world with Johnson Controls, serving as a senior heat transfer engineer after graduation. It was there in their Heat Transfer Center of Excellence that he developed energy efficient solutions for split residential and commercial packaged units. Nawaz said working for industry has given him a unique perspective and impacted his current research at ORNL.

“We are taught about great concepts at universities without much appreciation for real life constraints; you can have a unique design, but it has to be affordable,” he said. “I’ve seen firsthand what it really takes to apply these big ideas on the industry side and for industry to adopt them.”

In 2016, Nawaz joined ORNL as a research scientist to expand his scope of work. Since then, he has been developing highly diverse research initiatives which range from advanced building equipment and appliances, modular power generation, desalination and the more recent carbon capture from air project. He remains engaged in the research of advanced heat exchangers and has been using additive manufacturing with ceramics and polymer composites to develop a next generation thermal management solution for extreme environments. He also continues to evaluate the performance of emerging refrigerants with low global warming potential.

When the COVID-19 pandemic hit the country in 2020, Nawaz applied his knowledge of air transport to solve another complex problem — how to limit the spread of viral particles in confined spaces and throughout buildings. Through research funded by the DOE Office of Science through the National Virtual Biotechnology Laboratory, Nawaz was part of a team that performed experiments on aerosol dispersion, simulating various air management configurations in a controlled setting, to better understand how HVAC systems can effectively facilitate or mitigate the spread.

Despite the demanding pace of his research, which was recognized by the American Society of Heating, Refrigerating and Air-Conditioning Engineers with a Distinguished Service Award in 2017, Nawaz still finds time to give back, mentoring more than 20 students and junior staff since joining ORNL.

“The way I see research is two people are better than one. I’m focused on growing my legacy,” he said. “I’ve been really lucky, because mentorship and supervision enabled me to be where I am now. And it’s time for me to essentially return it, because there are young minds out there that might have a better way. When you’re mentoring, it’s really like returning purified air to the atmosphere.” 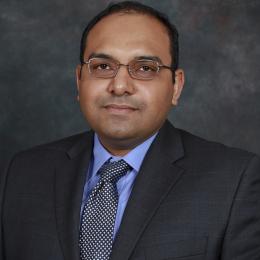