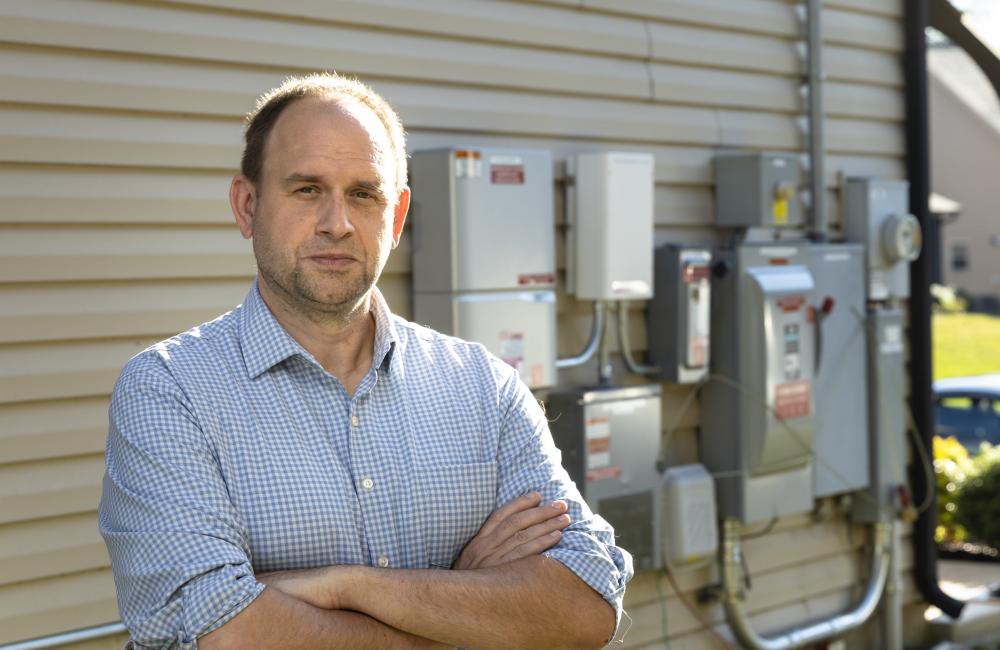 Joe Hagerman is expanding connected neighborhood research at ORNL and envisions buildings of the future as resources capable of managing the flow and exchange of energy based on economic and market signals – a concept known as transactive energy. Credit: Carlos Jones/Oak Ridge National Laboratory, U.S. Department of Energy

Joe Hagerman, ORNL research lead for buildings integration and controls, understands the impact building technology innovations can have during times of crisis. Over a decade ago, he found himself in the middle of one of the most devastating natural disasters of the century, Hurricane Katrina.

In 2006, the Memphis native was on loan from the Federation of American Scientists, or FAS, to work as a design consultant to Mississippi’s Emergency Management Agency and tasked with designing and manufacturing more than 3,000 housing units for residents displaced by the hurricane. He used his training from Mississippi State University’s school of architecture and Columbia University’s civil engineering program to not only design safe, affordable housing but to give Mississippians in the coastal area their first introduction to something extra – energy efficiency and resilience.

“We weren’t just building to provide roofs over heads,” he said. “We had the opportunity to construct something better and stronger, and we did so by designing super energy efficient modular homes in a costal disaster area. It was the largest single order of Energy Star compliant homes ever produced in the US.”

Those homes, known as Mississippi Cottages, served as a solid foundation for residents and researcher alike, launching Hagerman to a position as senior technical advisor with the US Department of Energy. Mississippi Cottages can still be seen across Mississippi’s coast as they have transitioned into permanent housing and structures within the community – providing safe, affordable, and energy efficient housing.

In 2009, Hagerman’s work at FAS caught the attention of leadership at the Office of Energy Efficiency and Renewable Energy at DOE, where he was selected to serve as a senior technical advisor to the assistant secretary.

“This was an ideal time to push building energy efficiency to the forefront and emphasize the role of science and technology,” he said. “We were at the point where we knew buildings could have a significant role in mitigating climate impacts, but we also needed to convey to the consumer the positive economic impact of efficiency.”

It was also around this timeframe that another unfortunate event had hit the US – the financial crisis of 2007-2008.

“The financial crisis had a significant impact on the real estate and construction markets,” Hagerman said. “We had to brainstorm how we could revitalize those industries, spurring building sector investment, and retrofitting existing buildings – all to help get people back to work.”

“One of the largest programs I was involved in was the effort to get homes and businesses retrofitted, bringing older buildings up to speed for owners to benefit in energy savings and supporting efforts to promote those types of activities,” he said. “Fortunately, we had the opportunity to help inform national policies focused on improving building efficiency.”

Another initiative Hagerman was involved in was DOE’s Better Buildings Program, a program in which ORNL remains active where scientists partner with the public and private sectors to make US homes, commercial buildings and industrial plants more energy efficient through investment acceleration and best practices sharing.

“People aren’t resistive to change to something more energy efficient, they just didn’t know what options are available, and the impact that those options have directly to their consumer benefits.” he said. “In the early years, we tried to motivate change by rationally explaining the life cycle cost which, to be honest, is a tough sell. I’ve seen that a turning point has been the advent of connectivity which motivates consumers to rethink what they want and need in equipment giving us new opportunities to promote efficiency and connectivity with other systems.”

With the right programming and platform, a building and the electric grid can communicate amongst themselves and effectively negotiate seamless control to benefit both the consumer and the utility

Hagerman’s own perspective on building technology continues to evolve, as both a consumer and a researcher. He sees buildings of the future as resources capable of managing the flow and exchange of energy based on economic and market signals – a concept known as transactive energy.

“Homes and appliances are getting more connected, smarter with some onboard computing, and the research options are growing,” he said. “With the right programming and platform, a building and the electric grid can communicate amongst themselves and effectively negotiate seamless control to benefit both the consumer and the utility.”

Prior to coming to ORNL in 2019, Hagerman was in charge of steering transactive controls and building-to-grid integration research at DOE.  One of his projects was VOLTTRON, a cybersecure, distributed building control system that interacts with a home’s HVAC (heating, ventilation, and air-conditioning) and water heater developed jointly by ORNL and Pacific Northwest National Laboratory.

ORNL has developed algorithms on VOLTTRON and deployed the system for use in the Southeast’s first-of-its-kind residential microgrid, which operates off of the main power grid and serves as a primary energy source for a 62-home Smart Neighborhood in Alabama. ORNL collaborated with Alabama Power and Southern Company, on the smart, connected neighborhood.

With ORNL’s programming, VOLTTRON applications forecast and optimize each home’s energy use in response to signals from the microgrid, maximizing energy efficiency, ensuring reliability and supporting community resilience. The lab has since collaborated with Georgia Power and Southern Company to develop another Smart Neighborhood in Georgia, this time with townhouses that are equipped with solar panels and a residential scale battery.

“A big reason I came to ORNL is to expand the connected neighborhood concepts,” he said. “Commingling energy and information give rise to so many new energy and information transactions. ORNL has the talent, facilities, and capabilities to expand these connected communities beyond the pilots that were started in Alabama and Georgia and to validate the success of the concept at scale.”

“We can change how energy is stored be it in the form of thermal storage or virtual storage,” he said. “We can store electrons in a battery or virtually store them through a commitment to consume later when utilities have excess power. Where these ideas are physically located in individual houses, we have to come up with different models and algorithms to be able to control the houses as a community, collective and resilient resource.”

“I anticipate the way buildings are designed, in terms of air systems, will evolve in the coming years,” he said. “How can we design ventilation systems in buildings to prevent the transmission of a highly contagious virus like COVID-19? There’s much work to be done in this area and it’s going to take science, research, and innovation to bring about impactful change.”