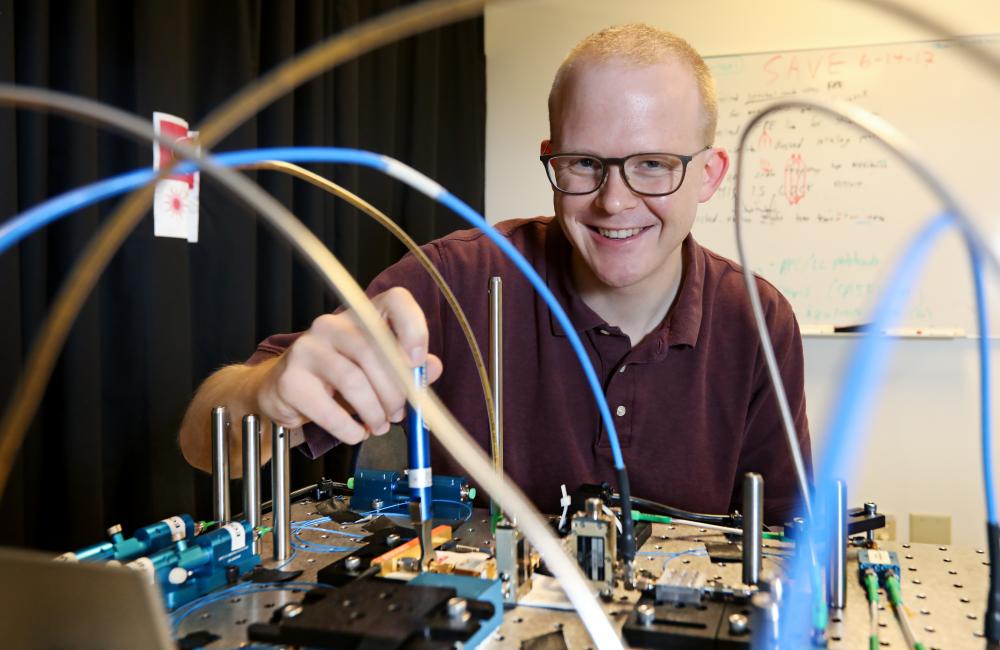 Researchers at the Department of Energy’s Oak Ridge National Laboratory, SRI International, Freedom Photonics and Purdue University have made strides toward a fully quantum internet by designing and demonstrating the first ever Bell state analyzer for frequency bin coding.

Their findings were published in Optica.

Before information can be sent over a quantum network, it must first be encoded into a quantum state. This information is contained in qubits, or the quantum version of classical computing “bits” used to store information, that become entangled, meaning they reside in a state in which they cannot be described independently of one another.

Entanglement between two qubits is considered maximized when the qubits are said to be in “Bell states.”

Measuring these Bell states is critical to performing many of the protocols necessary to perform quantum communication and distribute entanglement across a quantum network. And while these measurements have been done for many years, the team’s method represents the first Bell state analyzer developed specifically for frequency bin coding, a quantum communications method that harnesses single photons residing in two different frequencies simultaneously.

Teleportation is the act of sending information from one party to another across a significant physical distance, and entanglement swapping refers to the ability to entangle previously unentangled qubit pairs.

“Imagine you have two quantum computers that are connected through a fiber-optic network,” Lukens said. “Because of their spatial separation, they can’t interact with each other on their own.

“However, suppose they can each be entangled with a single photon locally. By sending these two photons down optical fiber and then performing a Bell state measurement on them where they meet, the end result will be that the two distant quantum computers are now entangled — even though they never interacted. This so-called entanglement swapping is a critical capability for building complex quantum networks.”

While there are four total Bell states, the analyzer can only distinguish between two at any given time. But that’s fine, as measuring the other two states would require adding immense complexity that is so far unnecessary.

The analyzer was designed with simulations and has demonstrated 98% fidelity; the remaining 2% error rate is the result of unavoidable noise from the random preparation of the test photons, and not the analyzer itself, said Lukens. This incredible accuracy enables the fundamental communication protocols necessary for frequency bins, a previous focus of Lukens’ research.

In the fall of 2020, Lukens and colleagues at Purdue first showed how single frequency-bin qubits can be fully controlled as needed to transfer information over a quantum network.

Using a technology developed at ORNL known as a quantum frequency processor, the researchers demonstrated widely applicable quantum gates, or the logical operations necessary for performing quantum communications protocols. In these protocols, researchers need to be able to manipulate photons in a user-defined way, often in response to measurements performed on particles elsewhere in the network.

Whereas the traditional operations used in classical computers and communications technologies, such as AND/OR, operate on digital zeros and ones individually, quantum gates operate on simultaneous superpositions of zeros and ones, keeping the quantum information protected as it passes through, a phenomenon required to realize true quantum networking.

While frequency encoding and entanglement appear in many systems and are naturally compatible with fiber optics, using these phenomena to perform data manipulation and processing operations has traditionally proven difficult.

With the Bell state analyzer completed, Lukens and colleagues are looking to expand to a complete entanglement swapping experiment, which would be the first of its kind in frequency encoding. This work is planned as part of ORNL’s Quantum-Accelerated Internet Testbed project, recently awarded by DOE.

This work was funded in part by the DOE’s Office of Science through the Early Career Research Program.