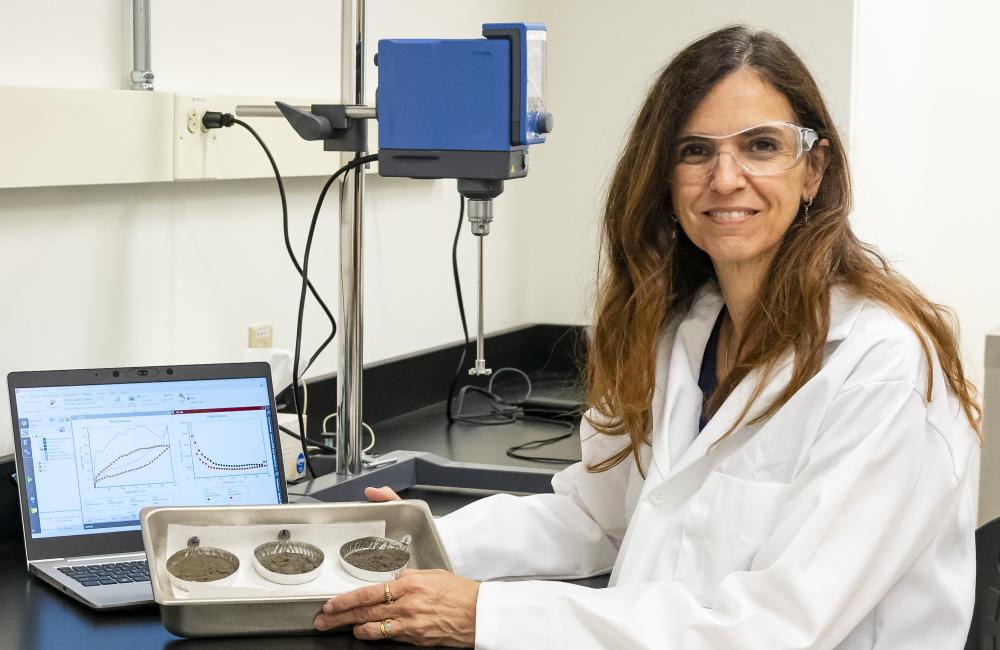 Growing up in Brazil, Oak Ridge National Laboratory materials scientist Denise Antunes da Silva remembers ceramic tiles being as common as the coffee beans the country is famous for growing and exporting. The colorful tiles dotted walkways and served as the building blocks for residential and commercial construction. She didn’t think much about how the tiles were produced, however, until years later while pursuing a degree in materials science and engineering. It was during her studies that Antunes da Silva decided to give them a closer examination, focusing on the cement that made them possible.

“I started studying their texture to try to understand what was inside, why some tiles fail to hold together and why others don’t attach,” she said. “The secret was in the cement mixture.” 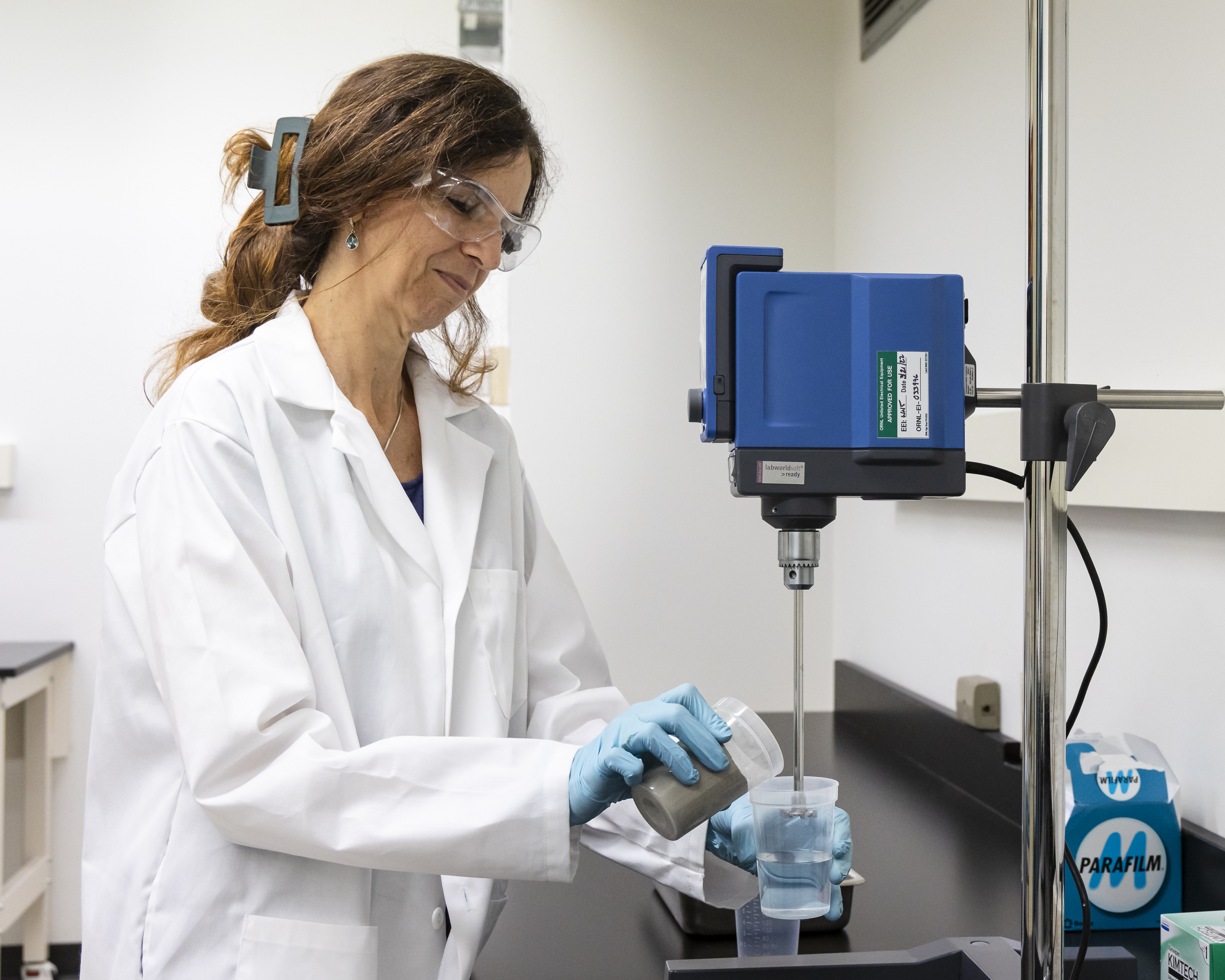 As she experiments with cement, Antunes da Silva is focusing on deployment, monitoring how soon a new invention can move to the marketplace. Credit: ORNL, U.S. Dept. of Energy

Concrete, which is made by adding sand, gravel and water to cement, is one of the most commonly used construction materials in the world, but it’s also carbon-intensive because of the cement. Making cement requires heating a mixture of limestone, clay and other minor constituents to extreme temperatures, releasing hundreds of kilograms of carbon dioxide for every ton produced. Recent estimates show that concrete contributes to a least 8% of global carbon emissions.

In the years since her academic studies, Antunes da Silva has spent more than a decade working in several positions within the research and development departments of two well-known U.S. companies, W.R. Grace and Quikrete, serving as lead scientist and global research director. Her work has focused on finding solutions to improve the performance and reduce the carbon footprint of cement-based materials. By 2021, however, Antunes da Silva was ready to leave industry and get back to her research roots.

“I began my career in a lab environment as a postdoc with the University of California at Berkeley, where I worked for the first time with a national lab, Lawrence Berkeley, using their soft X-ray microscope to visualize particles of cement as they interact with chemical admixtures,” she said. “My passion has always been research and academia. I spent 10 years in academia, another decade plus with industry, so the time was right to come to Oak Ridge.”

Antunes da Silva joined ORNL as a senior research and development scientist working with the Building Envelope Group, where she was given the responsibility of focusing on lowering the embodied carbon of building materials for new construction and retrofits. Her research is part of the Advanced Construction Laboratory at the Department of Energy’s Building Technologies Research and Integration Center at ORNL. Over the past year, she has also established ORNL’s first research space dedicated to studying binders such as cement — the Sustainable Building Materials Laboratory.

“I want to be able to deploy,” she said. “I want to put something out in the world. I’m already working on a project that reduces substantially the amount of cement needed in the mix. This is something we can immediately deploy that will have long-term impact by making cement-based materials such as concrete more sustainable and environmentally friendly.”

Because of concrete’s wide use and environmental impact, Antunes da Silva is approaching her research with a sense of urgency too, doing what she calls fundamental research with an application.

“Cement isn’t going away, because there is no replacement for it at the same scale,” she said. “So what we need to do now is put effort into improving its efficiency, using it but using much less. We have to investigate other materials that don’t use cement but form a product similar to concrete. We know what we need to do, and we have the capability here at ORNL to really make an impact immediately on the carbon emissions.”

Antunes da Silva is also pursuing low-carbon buildings materials by studying alternative binders using coal ashes that are deposited in many ponds and landfills in the country.

“There’s been some misconceptions about concrete and cement. It is low in carbon output compared to other building materials, but it is used in such huge amounts that the impact on the environment is large. However, there are many paths to negating those emissions too,” she said. “That’s what my work at Oak Ridge is focused on: testing several options and deploying the most promising solution.”

Life lessons in the Amazon

While Antunes da Silva is confident that the cement and concrete industry will achieve sustainability, she remembers a time early in her career when she wasn’t quite so self-assured. One of her first jobs after completing undergraduate and graduate degrees in civil engineering in Brazil was to serve as a field engineer in the Amazon. Her assignment was to manage a group of 10 construction workers on the site of a five-star hotel. She supervised day-to-day activities for the expansion and improvement of all indoor facilities.

“I was the only female on the work team, young, fresh out of college, and given a group of older guys to manage in the Amazon, which is a challenging environment naturally,” she said. “Most of them had been working longer than I had been alive up to that point. I had a lot to prove.”

The moment to showcase her value came in an unexpected way, too.

“The construction team was trying to finish building a storage facility, but to do that, all of these huge round wheels of cheese had to be moved out of one huge cooling chamber to another,” she said. “We didn’t have much time, because we couldn’t afford for all that cheese to spoil. I walked in, literally pulled my sleeves up and started transferring cheese.”

She said she remembers going to bed that night physically drained and, of course, smelling like cheese. The next day, one of the welders told Antunes da Silva that he couldn’t believe she spent hours physically transferring cheese right along with them.

“I got some respect out of that,” she said. “You treat everybody the same; we all have an important role to fulfill, and it takes teamwork to get it done and on time.”

Antunes da Silva said the resort upgrades were finished as planned, and the time spent in the Amazon gave her the confidence to start a company focused on providing forensic inspection and diagnostics of damaged buildings in Brazil. The startup was prosperous, but Antunes da Silva left it to go back to research, completing her doctoral degree in materials science and engineering.

“I’ve never stopped learning about materials or searching for ways to improve them,” she said. “I grew up the daughter of a banker and a schoolteacher who taught me to work as hard as I can for what I wanted. I chose engineering because it was all about figuring things out. Not many females took that path in the 1980s and early ’90s in Brazil.”

As an invited expert and international lecturer on cement materials who holds six patents and counting on production processes, Antunes da Silva intends for the next part of her career to be about fulfillment.

“It’s another challenge but a once-in-a-lifetime opportunity to not only invent a better performing building material but at the same time change the environment for the better,” she said.

UT-Battelle manages Oak Ridge National Laboratory for the Department of Energy’s Office of Science, the single largest supporter of basic research in the physical sciences in the United States. The Office of Science is working to address some of the most pressing challenges of our time. For more information, please visit energy.gov/science. 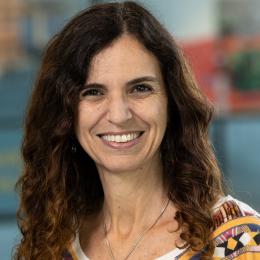