An international problem like climate change needs solutions that cross boundaries, both on maps and among disciplines. Oak Ridge National Laboratory computational scientist Deeksha Rastogi embodies that approach. She partners with colleagues in many fields, using high-performance computing to understand the human impacts of climate change.

During almost a decade of work at ORNL, Rastogi has used earth system modeling and scientific data analysis to project how climate change is likely to affect electricity demand, hydroelectric power generation, critical infrastructure and human health. Her focus is often climate extremes.

Rastogi’s results can be used to help understand how climate change is likely to impact marginalized communities and vulnerable ecosystems, as well as to inform strategies for reducing those impacts.

“I see myself as a scientist who bridges the gap between the scale at which climate scientists work, and the scale at which human system impacts are felt,” said Rastogi of the lab’s Computational Science and Engineering Division. “I think it’s important to make these connections.”

Climate scientists often use models with a coarse spatial resolution, or large scale, of at least 100 to 150 kilometers (60 to 95 miles). That’s helpful for broad national and international policymaking. But it’s not sufficient for investigating regional and local impacts, such as how climate change could increase heat stress in a specific low-income neighborhood or affect hydroelectric power generated in a particular river system.

Rastogi applies computational methods to model current and future climate impacts at a scale as fine as 4 kilometers (2.5 miles). This is often the scale at which individuals and governments make choices about where to live, what infrastructure to build and what measures will help create resilient communities.

Rastogi recalls having a strong interest in environmental issues since her childhood in a small town in northern India. She studied environmental engineering at the Indian School of Mines –  now the Indian Institute of Technology – in Dhanbad, India. There, she developed a burgeoning interest in climate change before pursuing a master’s degree in atmospheric sciences at the University of Illinois Urbana-Champaign. She earned a doctorate in energy science and engineering with a focus in environmental and climate sciences from the University of Tennessee, Knoxville.

As an ORNL intern in 2012, Rastogi helped analyze the accuracy of global climate models in simulating monsoon behavior over South Asia: when the rainy season starts, what path weather systems take and how much rain they produce. She said she found the research especially meaningful after seeing the effects of monsoons growing up in India.

Rastogi said the internship led her to pursue working at ORNL long-term, because she was impressed by both the lab’s supercomputing capability and its atmosphere of encouraging collaboration across disciplines.

In a foundational example of Rastogi’s approach, her doctoral research included multiple studies and collaborators. She used high-resolution climate projections to evaluate how climate change will shape future electricity demand, the characteristics of heat waves and the footprint of heavy rainfall events. The research used downscaled climate data to understand how human behavior is altering hydroclimate behavior.

Rastogi is contributing to ORNL’s ongoing third assessment of the effects of climate change on federal hydropower. She is part of a team that used multiple techniques to downscale state-of-the-art models from the most recent version of the Coupled Model Intercomparison Project phase 6, known as CMIP6. This is an international archive of climate models being used for the Sixth Assessment Report of the Intergovernmental Panel on Climate Change. The ORNL team provided CMIP6 with high-resolution projections of the future interactions of the climate and water cycle, known as the hydroclimate, across the continental United States.

Rastogi’s specialty is evaluating the effect of climate change on extreme weather events and understanding their subsequent impacts. Recently she led a study to understand whether different types of heat waves are likely to become more extreme in the future. The study concluded that dry heat waves will become even drier, but humid heat waves won’t. However, heat stress, as measured using the heat index, will continue to increase during both types of heat waves, because it is determined by temperature and humidity combined, Rastogi said.

She recently took these results a step further. Rastogi and her colleagues analyzed the impact of humidity on electricity demand in the Southeast as the climate warms. Rastogi developed and compared models of electricity demand that use only temperature with those that use a heat stress index, indicating apparent temperature. As expected, the latter model demonstrated substantially higher demand, even at moderate temperature increases. This shows the importance of considering humidity when preparing for future electricity needs, Rastogi said.

“We have been having more discussion on how we can take it to the subregional level so resource managers can use it to plan for electricity infrastructure,” she said.

Rastogi is also developing simulations to better understand how simultaneous heat waves and droughts influence natural systems and human communities. This is part of a collaboration with experts at Lawrence Berkeley National Laboratory: Rastogi is contributing to the Integrated Multisector Multiscale Modeling project by developing downscaled climate projections under a variety of future scenarios.

Rastogi is contributing to several new studies on the environmental and social determinants of human health, conducted with the U.S. Department of Veterans Affairs and Georgetown University.

“We are mapping the current localized health effects of climate and the community environment,” Rastogi said. That requires local data on factors like heat stress, ozone and fine particle pollution, and proximity to natural or industrial areas. “We also plan to investigate how climate change might alter or intensify the impacts on human health.” With these projects, Rastogi is also analyzing whether some types of communities are more likely to face harm than others.

“I’m trying to explore how climate extremes affect different marginalized groups, like different ethnicities and people living in poverty,” Rastogi said. She plans to map air quality and heat stress data to the census tract level, combining it with demographic information to understand the risks to individual neighborhoods. This could lay the groundwork for addressing questions of environmental justice.

Rastogi examines how climate change will affect not only vulnerable human communities, but also vulnerable plant communities. Through ORNL’s Laboratory Directed Research and Development Program, Rastogi is working with colleagues in computational earth sciences to investigate how future climate extremes are likely to affect ecosystems.

“Sometimes ecosystems can tolerate the mean change in climate, but not the extremes,” particularly when extremes like droughts and heat waves occur together,” she said.

Rastogi speaks rapidly and with enthusiasm as she summarizes her prolific partnerships and research interests. She said her colleagues want to explore the intersection of climate science with their own studies of health, infrastructure and green power, but they don’t always know how.

UT-Battelle manages ORNL for Department of Energy’s Office of Science, the single largest supporter of basic research in the physical sciences in the United States. The Office of Science is working to address some of the most pressing challenges of our time. For more information, please visit www.energy.gov/science. — S. Heather Duncan 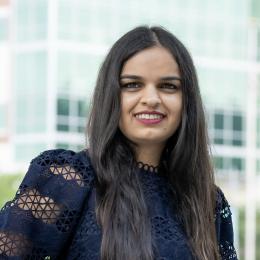