Candice Halbert: From inspired to inspiring, cultivating a community of young scientists

Halbert works as a scientific associate at the Spallation Neutron Source (SNS), located at the Department of Energy’s (DOE’s) Oak Ridge National Laboratory (ORNL). There, she ensures experiments run smoothly on neutron scattering instruments such as the Liquids Reflectometer instrument, used by researchers from around the world to study interfacial interactions in thin films at the atomic scale. Neutrons allow scientists to study a wide range of materials with unique and sometimes perplexing properties, providing them with unprecedented insights into improved applications in such fields as medicine, manufacturing, engineering, and electronics.

“It’s great to be a part of a community of scientists and engineers and to explain the ways they can use reflectometry as an analytical tool to enhance their research,” said Halbert, who is a chemist by training. “Neutron Sciences offers many benefits to users who come and do experiments at ORNL.”

Halbert’s primary responsibilities include training visiting researchers to use the instrument properly and facilitating data collection and analysis. She also configures the instrument to match the specifications of each SNS user’s experiment and monitors and maintains essential equipment at the beamline.

Because users sometimes run complementary experiments at different instruments, she is accustomed to collaborating with the researchers and other instrument teams to optimize the ideal combination of techniques for specific neutron studies. She says these kinds of partnerships help her build professional relationships with her peers and members of the neutron scattering community.

“I like talking with other scientists and learning about their backgrounds,” she said. “It’s interesting to hear peoples’ stories and learn where they come from.”

When Halbert isn’t helping other researchers, she works on her own interests, which include studying rheology and Langmuir systems, as well as further developing soft skills to be a more effective team member, communicator, and creative thinker. She appreciates the autonomy she has at the laboratory to work on additional projects, travel to conferences and other events, and pursue professional development opportunities and extracurricular activities that help her grow as a scientist.

“I really enjoy what I do and am grateful for these opportunities,” she said. “I don’t typically perform well when I’m in a box, but the lab lets me think big. That kind of high-level focus is where I can really excel.”

Despite an early interest in medicine, it was chemistry that won her over. Halbert’s first undergraduate chemistry class shaped her academic aspirations and influenced her career trajectory as a researcher. She credits the course’s professor, Dr. Liza Szczepura, for introducing her to the world of research and encouraging her to join her undergraduate research team.

Once she found her scientific calling, Halbert’s passion and talent for the subject helped her succeed, both in the classroom and in the lab. She went on to earn a BS in chemistry from Illinois State University and an MS in chemistry from Georgia Institute of Technology.

“Chemistry just clicked for me,” she said. “Working equations and doing hands-on experiments just makes sense to me analytically—it’s like a puzzle that fits together perfectly in my mind.”

After graduation, Halbert worked in the pharmaceutical industry and in nuclear waste management. Throughout these experiences, she says she always knew she wanted to make her way to a national laboratory, where she would have the resources to do more research.

“Working at the lab has always been on my radar,” she said. “There are so many different departments, projects, and opportunities, so you have the ability to grow and change while staying in the lab system.”

Halbert came to ORNL in 2006 and helped set up the first user chemistry lab at SNS, which was a brand-new facility at the time.

“It was refreshing to get back to the research side of things,” she said. “Collaborating with other users and staff scientists is great, and it’s always fun to learn about the new projects they’re working on.”

Passing along the passion for science

Halbert has received significant recognition for her research contributions—for example, gracing the Knoxville News Sentinel’s 40 Under 40 list—but it’s her contributions outside the lab that make her truly stand out.

In 2016, she started gSTEM—girls in science, technology, engineering, and mathematics—a program through which she and other female volunteers from ORNL mentor local middle school girls to show them the benefits of a STEM career through hands-on experiments with practical, real-world applications. The experiments are wide ranging, such as learning to code, building simple Styrofoam hovercrafts, determining the amount of aspirin in an aspirin tablet, and growing different strains of bacteria commonly found on cell phones and door handles.

“I wanted to show girls—especially girls from urban communities—that they belong in science,” she said. “As mentors, our mission is to expose the girls to as many different types of experiments as possible and introduce them to as many different types of people as possible. It’s a safe, creative environment for them to be themselves and build new friendships, all while learning about science.”

Springboarding off the success of gSTEM, Halbert expanded the STEM program by creating a nonprofit 501(c)(3) parent organization called Youth Outreach in STEM, or YoSTEM. Under YoSTEM—which includes gSTEM—she and other ORNL mentors created the Build-a-Drone club. In it, co-ed middle schoolers build, calibrate, program, and pilot ground and aerial drones, from LEGO models to advanced-level designs.

“Right now, they’re building Arduino drones, which are college-level drones. They’re learning about vectors and inputting coding language into MATLAB,” Halbert said. “This is a high-level program with high-level activities. We’re continuing to challenge the kids because they’re continuing to meet the challenges.”

Team UT-Battelle provides support for the outreach program, and twice a year Halbert takes the students on a field trip to ORNL to show them where the mentors work and perhaps inspire them to someday work there, too.

As YoSTEM continues to grow, Halbert hopes to one day see it expanded into a national organization. In the meantime, she’s planning to expand science outreach in addition to YoSTEM by hosting Saturday STEM sessions that will be open to the local community.

“The mission is to serve underserved communities: cultural minorities, women, LGBTQ+, and individuals with lower socioeconomic backgrounds,” she said. “People have these preconceived notions in their minds of what a STEM person looks like, and breaking those stereotypes is just one of the fun parts.”

Despite it all, Halbert says her biggest measure of success and satisfaction comes from knowing her son is proud of her.

“My son is extremely excited that his mom is a scientist and he wants everybody to know,” she said.

Recently, Halbert fixed a broken microscope belonging to her son’s Boy Scout group. When the scouts started asking her details about the repair, her son replied, “Of course she got it working. My mom is a scientist.”

SNS is a DOE Office of Science User Facility. UT-Battelle manages ORNL for the DOE’s Office of Science. The Office of Science is the single largest supporter of basic research in the physical sciences in the United States and is working to address some of the most pressing challenges of our time. For more information, please visit https://www.energy.gov/science/.—Elizabeth Rosenthal and Jeremy Rumsey 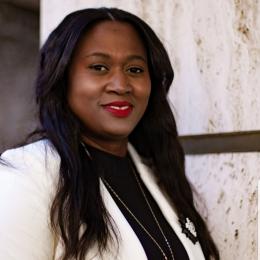