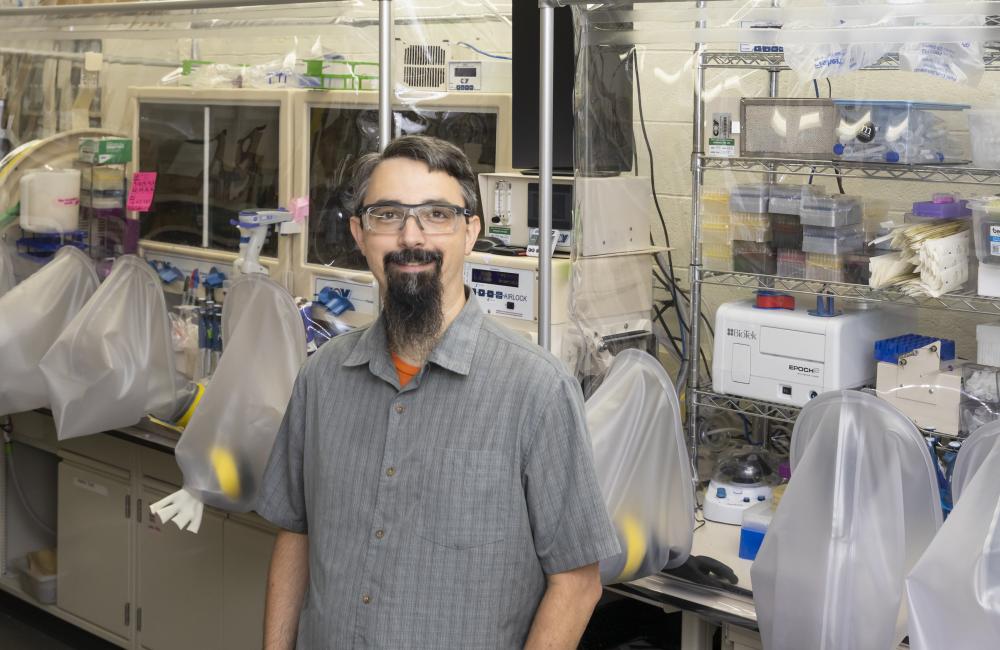 Whether he’s designing a microorganism to eat plastics or convert bioenergy crops like switchgrass and poplar into renewable fuels, Guss starts outside the lineup of usual microbial suspects, which includes E. coli and yeast. By focusing instead on less-studied organisms, called non-model microbes, Guss opens the door to harnessing their unique capabilities.

“The vast majority of metabolic engineering is done in a very small number of organisms because it’s easy to grow them and modify their DNA,” Guss said. “The problem is that some characteristics are really hard to engineer into an organism. If you want a microbe that can withstand high temperatures or consume plant material, for instance, it’s easier to start with an organism that’s already good at those things.”

This approach has proved successful for Guss, who leads research to identify and engineer non-model microbes as part of several multi-organization initiatives supported by the Department of Energy’s Bioenergy Technologies Office. Under the Agile BioFoundry, he leads a team that studies new non-model microbes and develops an array of technologies and methods for accessing and editing their genes. These genetic tools help shorten the typically long time it takes to make wild microbes useful for industry.

Guss also serves as ORNL’s principal investigator on a collaborative effort to harness microbes for upcycling existing plastics and designing new plastics that are biodegradable or recyclable by design. His team within the Bio-Optimized Technologies to keep Thermoplastics out of Landfills and the Environment, or BOTTLE, consortium specifically works to find biological ways to make valuable materials out of the billions of tons of waste plastics littering the planet.

For Guss, using such tiny creatures to tackle such big problems is one of the best parts of the job.

“We’re able to make microbes that do something no microbe has ever done before,” he said. “Being able to play around with microbial metabolism and come up with ways to make new molecules – and to be doing it hopefully for a better future – I think that’s really exciting.”

Some days, Guss’s job title might vary from genetic engineer to microbe hunter. A workday could involve searching for new microbes in unexpected locations, such as compost heaps or the soil underfoot.

But more often, he’s focused on developing the genetic tools that enable scientists to insert desirable traits into a non-model microbe’s DNA. This is no easy feat.

“One of the big challenges with non-model microbes is that they typically have defense systems against foreign DNA,” Guss said.

Guss and collaborators within the Center for Bioenergy Innovation, or CBI, which is supported by the DOE Office of Science’s Biological and Environmental Research program, made significant progress when they devised a method to bypass these defense systems in 2019. The method worked by imitating chemically marked DNA sequences that non-model microbes use to distinguish between their own DNA and foreign DNA floating in the environment. It’s now been demonstrated in nearly 20 microbes.

Another tool Guss developed and refined over more than a decade allows scientists to more quickly insert DNA into an organism’s chromosome while maintaining its stability. The technique enables researchers to sort through hundreds of DNA designs, such as variations of certain enzymes or pathways, in a matter of days. Previous methods required weeks or months.

Using the genetic tools they develop, Guss and his colleagues modify microbes for beneficial uses. Recently, Guss and an ORNL team bioengineered a non-model microbe to efficiently turn lignin, an organic polymer in plants that becomes a waste product of biorefineries, into itaconic acid, an industrial chemical used in plastics and paints. He also led a team that bioengineered a single microbe to simultaneously consume five of the most abundant chemical components of lignocellulosic biomass, or non-food plants, while also breaking down lignin for new uses. This overcomes the hurdle of needing separate bioreactors for multiple microbes, a key step toward producing cost-effective biofuels.

Although those two achievements relied on the same organism, Guss’s group holds a portfolio of nearly 30 microbes they work with regularly, far more than most other research groups.

What excites Guss most is sharing knowledge with partners in academia and industry. His group’s reputation for developing genetic tools makes them attractive collaborators for companies who want to edit their own favorite microorganisms for commercial purposes.

“Most people don't have that expertise,” Guss said. “Within the Agile BioFoundry, we have the ability to work directly with companies and help them solve their problems.” In one such partnership, Guss is helping a company create superabsorbent polymers that are also biodegradable for products like earth friendly baby diapers.

Finding direction on a random walk

Since joining ORNL in 2010, Guss has recognized that his job requires enormous creativity, a quality that, ironically, he long believed he lacked.

“As a kid, I never thought of myself as creative because I can't draw, I can't play a musical instrument,” Guss said. But growing up in a tiny Missouri town, he could picture himself as a research scientist. “I like to analyze things and figure out how things work, so science seemed like a natural place for me to go.”

Knowing he wanted to work in STEM, Guss entered college as a ceramic engineering major. From there, his path is partly a “random walk,” he said. Realizing his interest was in materials science rather than engineering, Guss sought to change his major but found his university didn’t offer a materials science degree. He instead chose biology.

After graduating, Guss earned his doctorate in microbiology at the University of Illinois at Urbana-Champaign. He studied how a unique class of microbes produce methane from simpler molecules like hydrogen and carbon dioxide. His doctorate gave him a strong background in microbial genetics and metabolism – and a desire to pursue more applied research.

Securing a postdoctoral position at Harvard, Guss joined a team researching rarely studied bacteria present in the lungs of cystic fibrosis patients. He realized medical microbiology wasn’t a good fit and returned to microbial metabolism and genetics by taking a research position in Lee Lynd’s group at Dartmouth. There he performed bacterial engineering for biofuels within the ORNL-led BioEnergy Science Center, CBI’s predecessor.

Midway through a series of interviews for an industry job, Guss decided to explore other options. Lynd reached out to ORNL and learned the Biosciences Division was looking for a metabolic engineer. Guss was the perfect fit.

He enjoys living in Knoxville, where the area’s low cost of living and many offerings create a “great environment” for raising his family.

At ORNL, he appreciates the mission-driven approach and collaborative research atmosphere.

“The big problems in the world are almost never going to be solved by a single person,” he said. “We need people with diverse expertise all coming together, and the national labs are really good at doing this large collaborative research pointed at solving big real-world problems.”

UT-Battelle manages ORNL for Department of Energy’s Office of Science, the single largest supporter of basic research in the physical sciences in the United States. The Office of Science is working to address some of the most pressing challenges of our time. For more information, please visit energy.gov/science. — Abby Bower