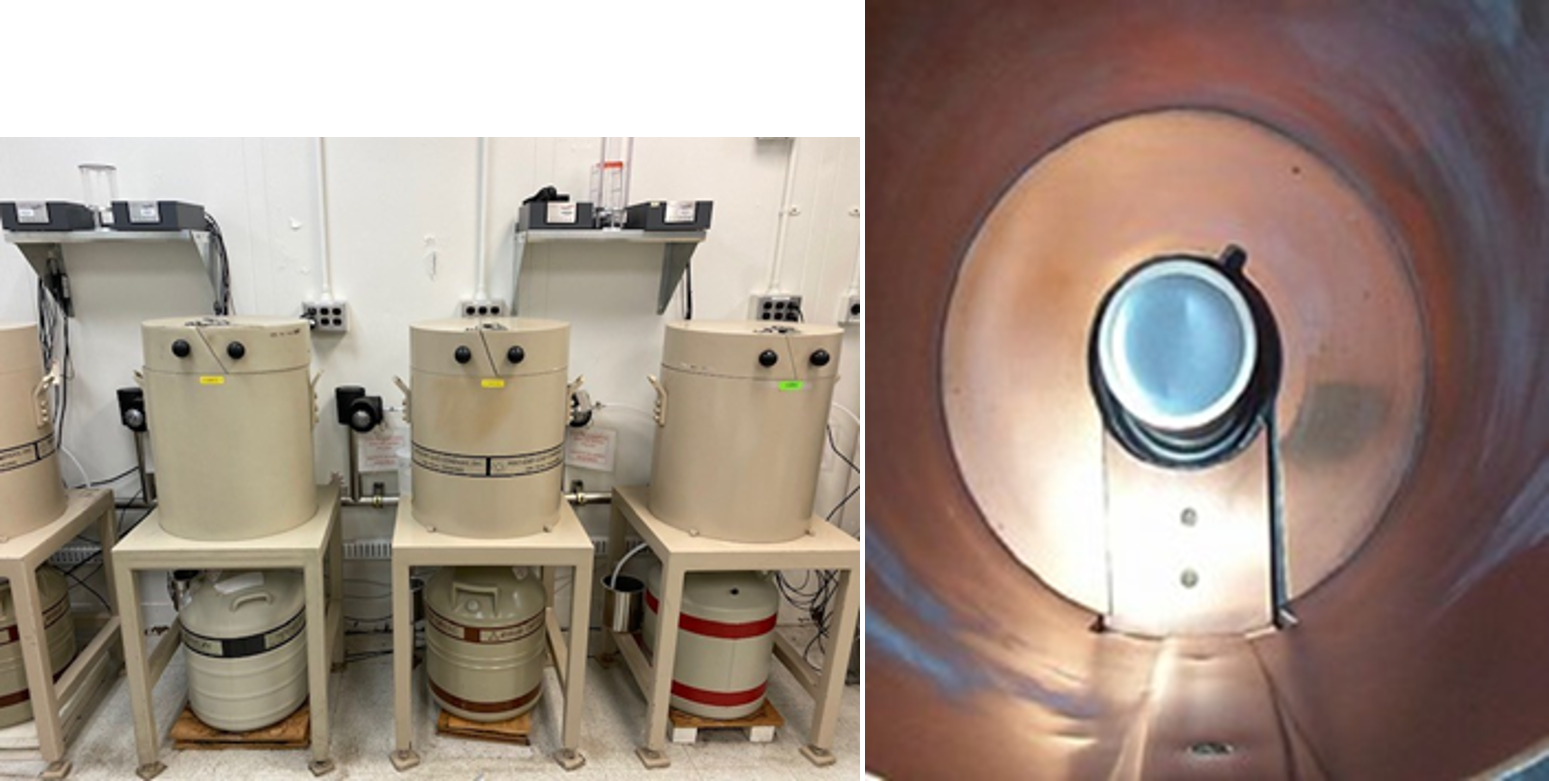 Gamma rays are electromagnetic radiation produced in the nucleus of an atom. These rays are photons and have energy (50 – 3000 keV) but no mass or charge, and therefore, do not readily interact or transfer their energy in matter, Those that do interact do so via one of three principle means; the photoelectric effect, Compton scattering, or pair production. All three types of interactions occur when a gamma photon interacts with the detector material. However, it is the photoelectric effect interaction that creates the well resolved energy peak from the nuclide.
The RMAL’s gamma spectrometry systems use solid-state semi-conductor detectors, namely high purity germanium (HPGe) coupled with a high voltage power supply, pre-amplifier, amplifier, multi-channel analyzer (MCA), analogue to digital converter (ADC), shield, dewer with liquid nitrogen (the HPGe must be kept at liquid nitrogen temperatures), and computer software to deconvolute the spectra. 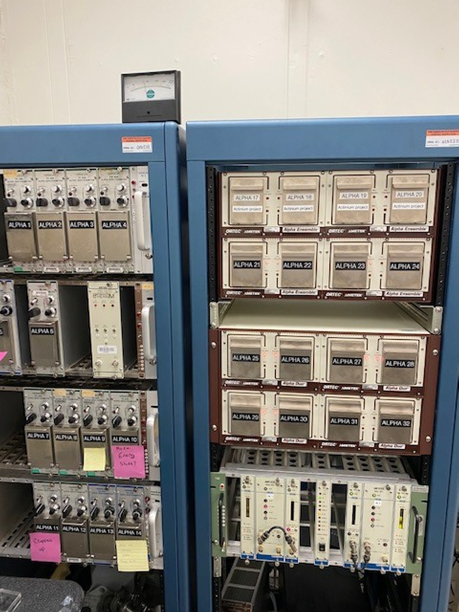 Alpha particles can be measured by several types of detectors, such as ionization chambers, proportional counters solid-state silicon semiconductors, and scintillators (ZnS, plastic, liquid). The RMALs alpha spectrometry system uses solid-state silicon semiconductors. In each type, a high-voltage power supply, preamplifier, amplifier, pulse discriminator, scaler, and recording device. An analogue-to-digital converter (ADC) and multichannel analyzer (MCA) is also required for spectrometry systems. Since alpha particles do not travel far distances, even in air, the alpha detector and sample is placed under vacuum.
Alpha spectrometry is an excellent way to identify and quantify alpha-emitting nuclides. Common radionuclides quantified by alpha spectrometry include Am-241, Pu-238, Pu-239/240, Th-228, Th-230, Th-232, U-233/234, U-235/236, and U-238. However, any radionuclide that emits alpha radiation may be detected on the system. Nearly any sample type may be analyzed by alpha spectrometry if a good separation is achieved for the target analyte(s). The detection limits and spectral resolution are very good. However, the separations needed for ideal counting conditions is time-consuming and requires well experienced chemists. Table 4.4 lists the advantages and disadvantages of alpha spectrometry. 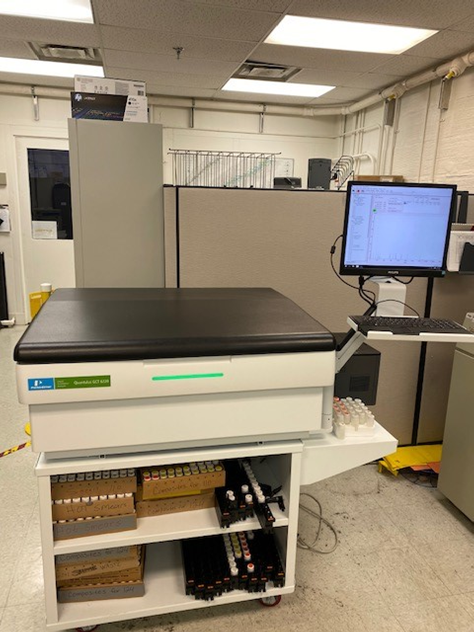 Liquid scintillation is often the method of choice for measuring radionuclides that decay by low energy beta emission or by radionuclides that are pure beta emitters and do not have an associated gamma ray (e.g. P-32). However, liquid scintillation can also be used for higher energy beta emitters (e.g. Sr-90) and alpha emitters. Samples are prepared with or without chemical separation and placed into a liquid scintillation “cocktail”. When the beta particle transfers its energy to the fluor in the cocktail, photons of light are produced. The amount of light produced is proportional to the activity in the sample.

Liquid scintillation has very high counting efficiencies because the sample is completely surrounded by the detector molecules of the cocktail. In fact, beta energies greater than 200 keV have essentially a 100% counting efficiency. However, since beta emission results in an energy continuum, it is nearly impossible to distinguish between two or more beta emitting radionuclides in a mixture, thus chemical separation may be warranted. Liquid scintillation is often used to quantify the “total activity” of a sample by analyzing the sample using the full 0-2000 keV energy range (this would include alpha and beta activity). Another disadvantage is the possibility of chemiluminescence and phosphorescence.  Care must be taken so that the geometry and matrix is very similar to the standards used to calibrate the instrument.
Liquid scintillation is used for all types of sample matrices including water (tritium), smears, and soils. Water samples are often distilled, and a portion of the distillate is counted for tritium. Smear samples can be placed directly into the cocktail and counted using whatever energy range the analyst chooses. Soil and other solid materials are typically processed, and separation chemistry is performed prior to counting. 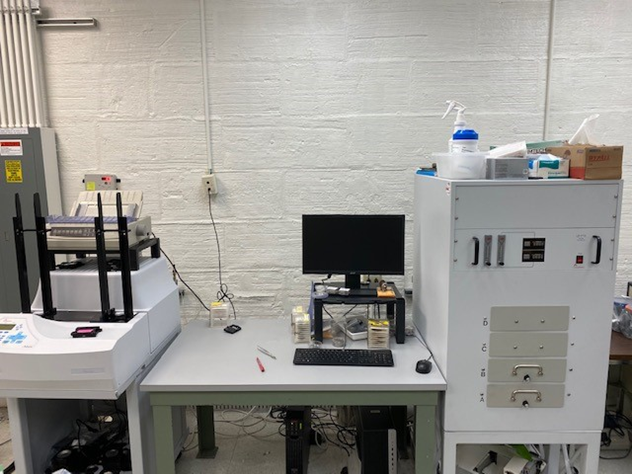 Low background proportional counting (LBPC) is a common method to count smears for gross alpha and gross beta activities. However, this method is also commonly used to measure the activities in medium to high energy beta emitters. Determination of Sr-90 or total radiostrontium is often determined by chemical separation of the strontium and counting via proportional counting in a variety of sample matrices. LBPC are typically calibrated such that alpha radiation can be distinguished between beta radioactivity by controlling the applied voltage to the detector. The counting efficiency is good for both alpha and beta emission, but not as high as liquid scintillation. As with liquid scintillation, LBPC cannot distinguish energy differences between beta particles or between alpha particles. Thus, separation chemistry is often used to isolate a single radionuclide prior to counting (with the exception of GAB). 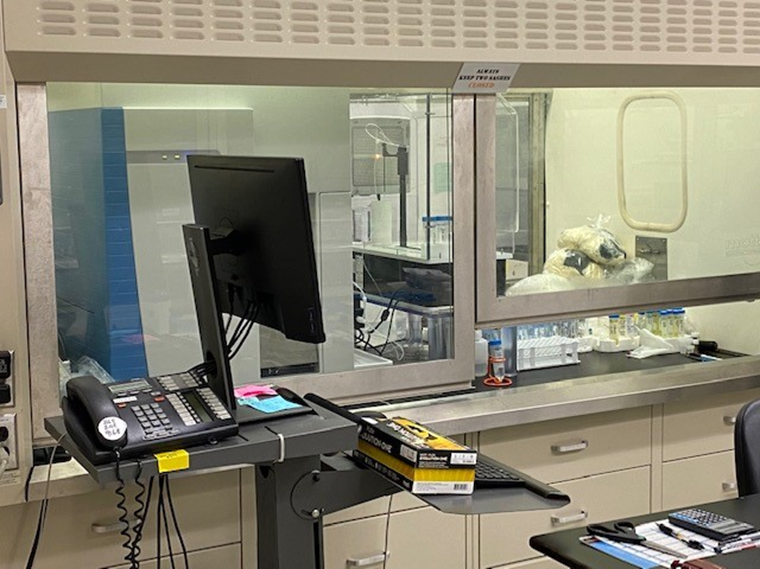 Inductively Coupled Plasma Mass Spectrometry (ICPMS) is another destructive method used for the determination of radionuclides. Nearly any sample type may be analyzed by ICPMS. Processed samples are introduced into the instrument and the sample is de-solvated, atomized and ionized in the plasma. The resulting ions are then separated by the mass spectrometer based on their mass to charge ratio. Thus, ICPMS does not measure the samples activity, but it measures the mass of the sample.  ICPMS is often used for the measurement of isotopic uranium, isotopic thorium, isotopic plutonium, and fission products. The method offers several advantages including very high sensitivities (low detection limits), multiple nuclides can be measured nearly simultaneously, fast sample analysis once the sample is prepared, and can distinguish between isotopes that alpha spec cannot distinguish (U-225/236). However, the instrument cost is relatively high and requires a well-trained employee to operate.