The Center for Radiation Protection Knowledge was established in 2010 by a memorandum of understanding (MOU) signed by Oak Ridge National Laboratory and the Department of Energy, Department of Defense, the Environmental Protection Agency, the Nuclear Regulatory Commission, and the Occupational Safety and Health Administration. Keith Eckerman and Rich Leggett of the Human Health Risk & Regulatory Analysis Team of ORNL Environmental Sciences Division led this effort to establish this center for the preservation of expertise in radiation dosimetry. This MOU is intended to help maintain and preserve U.S. expertise in radiation dosimetry and to ensure that Federal radiation programs are based on the best available information, applied in a consistent manner. For those interested, the MOU can be found here.

Dr. Nolan Hertel, Professor of Nuclear and Radiological Engineering at Georgia Institute of Technology, accepted a Joint Faculty Appointment in the Environmental Sciences Division in 2014. Nolan now serves as the acting director of the Center for Radiation Protection Knowledge. He assists in providing direction to the radiation protection dosimetry program as ORNL seeks to preserve and expand this important activity, which has a 60-year history of excellence in the development and use of models and methodology for radiation protection. The Center is responsive to the participating agencies and is administered by DOE.

Since its inception the ORNL Dosimetry Research Program has provided the national and international scientific communities with models and data required to estimate doses from exposure to radionuclides and establish exposure guidelines for radionuclides. The models developed in this program generally have become international standards. The program also has traditionally served as a center for archival and computer implementation of biokinetic and dosimetric models.

Models and Data Developed by ORNL

The framework of a dosimetric model is an anatomical 'phantom' representing the approximate masses, shapes, and spatial relationships of organs and tissues of a reference (typical) person of a given sex and age. A dosimetric phantom is used together with nuclear decay data (described later) for radionuclides to predict the sites of deposition of energy in the body from penetrating ionizing radiations emitted either from internally deposited radionuclides or from external sources.

ORNL's first anatomical phantom was developed in the 1960s and represented a reference adult hermaphrodite to allow calculation of doses to both male and female sex organs. For computation convenience (e.g., for Monte Carlo calculations of cross-irradiation of tissues) the organs and tissues and external body surfaces of the ORNL phantom were represented by union and intersection of regular geometric shapes such as ellipsoids and cylinders. The impetus for this phantom was the concern expressed by the Medical Internal Radiation Dose (MIRD) Committee (representing the nuclear medicine community) that dosimetry methods used at that time for time photon-emitting radiopharmaceutical sources were not credible because they did not account for cross irradiation of tissues. The ORNL phantom was adopted by MIRD for applications in nuclear medicine and later by the International Commission on Radiological Protection (ICRP) for use in a series of reports that provided guidance on intake of radionuclides by workers (ICRP Publications 30, 1979-1988; ICRP Publication 68, 1994). In the late 1970s ORNL added analogous phantoms for five pre-adult ages: infant, 1, 5, 10, and 15 years. In the mid-1980s the age-specific phantoms were modified and an adult female phantom was added. The modified age-specific phantoms were adopted by the ICRP for use in a series of reports on age-specific doses to members of the public from intake of radionuclides (ICRP Publications 56, 67, 69, 71, and 72, published from 1989-1996). ORNL's age-specific anatomical phantoms are illustrated in Figure 1. 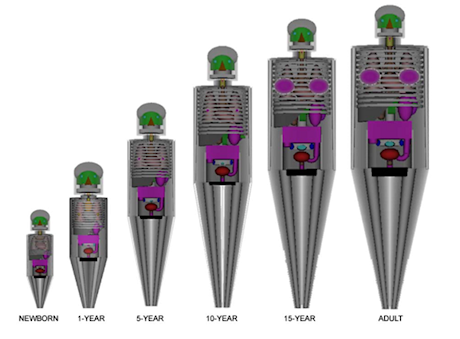 Two categories of physiologically based biokinetic models have been developed by ORNL since the early 1980s: (1) models of basic physiological systems such as blood circulation or transit of material through the gastrointestinal transit, and (2) element-specific models, i.e., models that address the characteristic behavior of individual elements in the body.

An example of a basic physiological systems model is the dynamic blood flow model developed by ORNL. The model structure is shown in Figure 2. Age- and sex-specific parameter values describing the distribution of cardiac output, blood perfusion rates of tissues, blood volumes of tissues, and transport times between compartments were developed from an extensive review of the literature on blood flow. The model provides a detailed description of the distribution of cardiac output and of regional blood volumes and can be used to follow the early movement of a bolus of activity beginning at the point of injection. This blood flow model has been used to derive dose estimates for ultra-short-lived radionuclides used in nuclear medicine, and as a model framework for development of element-specific biokinetic models for elements whose initial distribution is determined largely by the distribution of cardiac output (e.g., potassium, cesium, and radon).

An example of a physiologically based element-specific biokinetic model developed at ORNL is the age-specific model for lead. The model structure is shown in Figure 3. Age- and sex-specific parameter values describing the time-dependent distribution, retention, and paths of excretion of lead were developed from a comprehensive review of the literature on the fate of lead in the human body. The model is applied in ICRP documents to derive dose coefficients for radioisotopes of lead, by the EPA to assess the potential chemical toxicity of lead sources to children, and by the state of California to set standards for occupational exposure to lead as a chemical toxin.

The ICRP has now adopted ORNL's element-specific biokinetic models for a large portion of the periodic chart. Many of these models are also applied by other organizations for a variety of purposes, including nutrition studies of essential elements, assessment of chemical toxicity (e.g., for lead), and radiation dose reconstruction for epidemiological studies. In an interesting criminal case, ORNL's biokinetic model for polonium was used as a forensic tool to estimate the amount of polonium-210 that had been used to poison a former Russian spy. 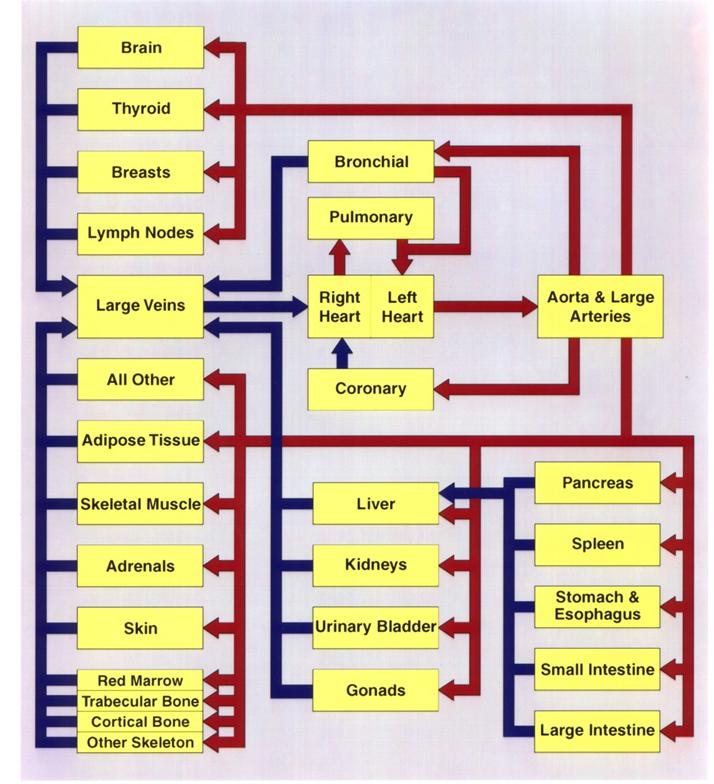 Since the 1950s the ORNL Dosimetry Research Program has also served as a center for development of data bases required in radiation protection. Two of the most important and widely used types of data are (1) nuclear decay data and (2) reference anatomical and physiological data.

Contributions to National and International Committees

International Commission on Radiological Protection (ICRP): Members of the ORNL Dosimetry Research Program have served on many ICRP committees or task groups since the 1950s. At present we are represented on ICRP Committee 2 (radiation dosimetry) and Task Group IDC on internal dose coefficients and biokinetic models. ORNL has produced or been a major contributor to a variety of ICRP reports issued since the late 1950s, including reports on limits on occupational intake of radionuclides, compilations of nuclear decay data, reference anatomical and physiological features of the human body, and biokinetic models. For several years ORNL has served as the lead organization for development of the ICRP's biokinetic models for systemic (absorbed) radionuclides for workers and members of the public.