The HPC mission includes the Computational Sciences Building, part of the Oak Ridge Leadership Computing Facility (OLCF), giving the world's most advanced computational researchers an opportunity to tackler problems that would be unthinkable on other systems.

To date, OLCF has produced three supercomputers, each bearing the title "world's fastest computer" in its time. The most recent highly efficient pre-exascale system, Summit, reached a speed of 143.5 petaflops in FY 2018. At its theoretical peak, Summit is capable of 200 petaflops, eight times more performance than the previously top-ranked HPC system, known as Titan. As supercomputing strategy continues to evolve, the deign features championed at ORNL will ensure that DOE remains positioned at the forefront of HPC on the international stage. Currently, infrastructure is being installed to support the next supercomputer, Frontier, which is scheduled for operations in FY 2022.

The new Summit supercomputer is super in more ways than just processing speed, thanks to the help of some engineers from F&O's Modernization Project Office who participated on the design team. Summit's systems have the ability to utilize moderate water temperature (70°F) for cooling. Normally, water for ORNL's supercomputers needs to be chilled to 45°F. This primary design feature resulted in savings of approximately $3.7 million in construction costs by eliminating the need for a larger chilled water plant. Other construction capital was eliminated by innovations in electrical power configuration design for the servers resulting in an estimated $500,000 in project savings.

And best of all, for long-term sustainable operations, Summit is designed to use medium temperature cooling water for long-term utility cost savings and improved energy efficiency. Water at temperatures of 64-70°F is provided direct to each computer rack. Water returns at 85-100°F and is cooled by a tower water heat exchanger, and when needed, a chilled water exchanger in series. Bypass of chilled water exchange will be possible much of the year. This unique design will result an estimated cost reduction of $1 million each year. Facility management is working with the High-Performance Computing (HPC) operations staff to optimize cooling system by trying computer run scheduler and computer diagnostic system to mechanical controls to further reduce operational cost. Now that's SUPER! 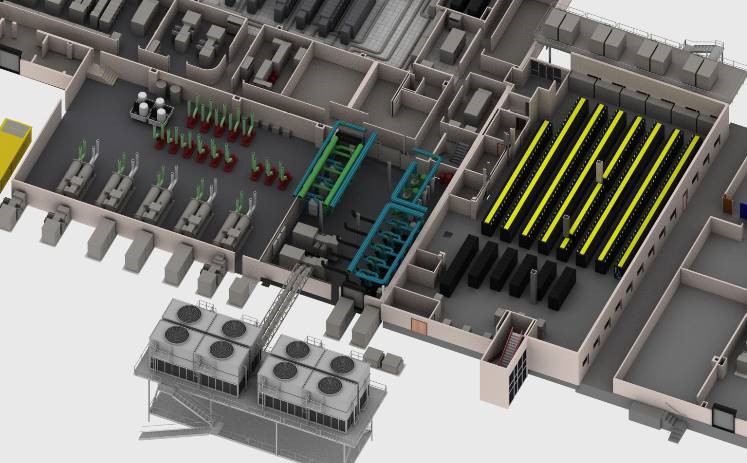 For a virtual walk-through of the data center and central energy plant, click here