The science behind national security 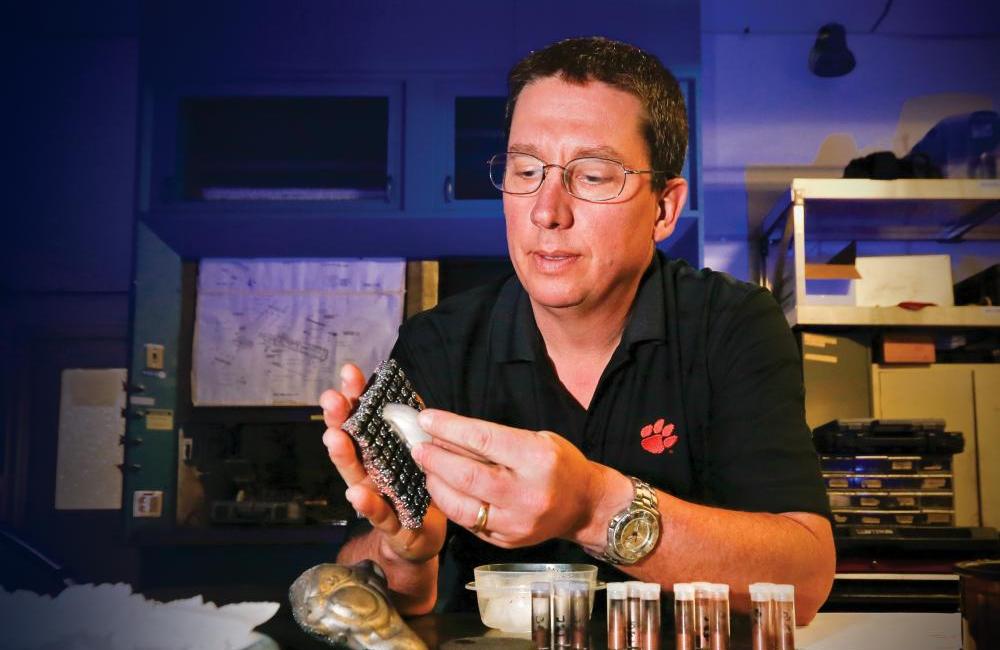 Standing in his lab nearly two decades ago, carbon researcher James Klett used a pair of tweezers to press an ice chip against a chunk of newly created material he held in his palm. The dark grey material, looking much like a hardened sponge, whisked heat up from his warm palm and melted the ice.

“In that moment I realized we had discovered a new material, a lightweight material that is not insulating but extremely thermally conductive,” said Klett, who made the serendipitous discovery while experimenting with his ORNL team on new carbon composites for lightweight aerospace components.

Made from carbon that has undergone multiple processes, the porous, bricklike foam felt cool to the touch. It owed its high thermal conductivity to an unusual graphite crystal structure peppered with minuscule air pockets. “Once the effect was apparent, the ideas blossomed and they’ve continued evolving ever since,” Klett said.

Characteristic of ORNL’s dual application of scientific discoveries, nearly every idea that followed for harnessing the foam’s unique capabilities soon transitioned into a national security application. Its use in cooling personal computers led to prevention of heat damage in military satellites and electronics carried by soldiers in the Middle East. Applications for civilian cars and trucks led to cooling of military vehicles and weapons. Prolonging the life of energy-efficient lights at college sports arenas (including at the University of Tennessee and Virginia Tech) may lead to more cost-effective lighting in cavernous military facilities such as airplane hangars.

“This is the nature of scientific discoveries at Oak Ridge National Laboratory,” explained physicist Brent Park, associate lab director for global security. “For every civilian use of a scientific discovery made here at our lab, there is a parallel national security application.”

The translation of basic scientific discoveries into real-world national security applications has been ongoing since the first researchers arrived at the Oak Ridge site in the midst of World War II. The work carried out by scientists and engineers grew from one generation to the next, evolving to meet new demands.

“People come to us for operational solutions because of basic science research and technological expertise that we’ve built up over many, many decades,” said nuclear physicist Larry Satkowiak, director of the lab’s Nonproliferation, Safeguards, and Security Programs.

Inquisitive scientists at ORNL in the 1950s began unraveling the mysteries of the genetic code in cells. That work provided the foundation for current ORNL experiments that are exploring how microorganisms in soil and water, which show genetic changes when exposed to radioactive materials, can be used as sensors to detect illicit nuclear or radiological activity. The lab’s pioneering work in the 1940s led to the production of radioactive isotopes. Today ORNL still produces isotopes for medicine, industry, and research and is the only known producer of nickel-63, which is used in airport detectors to identify high-risk materials.

“A deep sense of commitment, purpose, and passion was pervasive at the time of the birth of this lab, as scientists labored to help win the war,” said Thomas Zacharia, ORNL’s new lab director. “As I embark on this journey as lab director, I want to harness that same sense of being part of something that is bigger than yourself and apply it to today’s national security challenges, which are broad and deep and complex.”

ORNL researchers such as computer engineer Hector Santos-Villalobos, who specializes in computational imaging, have turned down job offers in the private sector because of this sense of purpose.

“I chose to come to the lab because here I can make science better. My contributions to science help make society better. On top of that, I am helping make the world a safer place for my child when my work benefits national security,” says Santos-Villalobos, who recently became a father.

“A common misunderstanding is that national security is mainly about fighting wars,” noted Rick Raines, director of the Data and Cyber Analytics Initiative in ORNL’s Global Security Directorate. “It is also about protecting our nation’s intellectual properties, making critical infrastructure more resilient, and keeping the electric grid up and running.”

Data analytics and cybersecurity are critical focus areas for the lab’s national security work. Defense and intelligence agencies rely on ORNL’s expertise to triage overwhelming volumes of data into actionable information based on in-depth analysis, often in real time. They also turn to ORNL for the creation of specialized cybersecurity platforms. These cybersecurity tools protect military resources as well as other enterprises such as the banking industry and the electric power grid.

“The combination of our lab’s powerful computing resources and our team’s unique talents and capabilities allows us to rapidly transition from brainstorming early concepts to producing operational solutions for national security challenges,” said Raines, who directed cyberspace research for the Air Force before joining ORNL.

Computer scientist Justin Beaver, who worked at NASA for a decade before joining ORNL, is on a team that has been working for several years to develop next-generation cybersecurity technology.

“We identify these in real time so that security analysts can verify and respond before damage is done—reducing the reaction time for new and novel threats from weeks to minutes.”

“Essentially what we are doing is optimizing the role of the human analyst,” Beaver said. “The sheer volume of data that must be analyzed is impossible for a team of people to digest. Our data analytic tools scour the massive volume of data, categorize and prioritize the data based on an analysis of the threat severity, and then visualize the information so that it is easily understood by analysts.”

With the arrival of ORNL’s next supercomputer, Summit, the lab’s capabilities in a related area, artificial intelligence, will also expand.

“What many people don’t yet realize is that Summit will very likely be the most powerful artificial intelligence machine in the world because of its unique chip set, which was specifically designed to enhance deep learning and data analytics capabilities,” Zacharia said. “The opportunity to use these capabilities in the national security space is broad.”

Around the world, ORNL is perhaps best known for its leadership in the science and technology that undergirds nuclear nonproliferation efforts. The lab fulfills an international role in advancing scientific and technical capabilities to detect illicit nuclear activities, secure fissile and radiological materials, and counter the threat of weapons of mass destruction. Areas of expertise include nuclear forensic science, knowledge of the uranium fuel cycle, and best practices in safeguarding and securing high-risk materials.

Over decades the lab has built the scientific capabilities needed to detect and trace the origins of illicit, high-risk radiological and nuclear materials that appear in places where they shouldn’t be— ideally intercepting and identifying them before an event occurs. The lab’s scientists have improved the speed, quality, and capabilities of nuclear forensic analysis and have advanced the technologies required to collect and analyze samples.

“ORNL and other DOE national laboratories are the only places where you can get a combination of decades of experience in the nuclear fuel cycle coupled with state-of-the-art basic science research into everything imaginable, from materials science to interactions of biological materials,” Cable-Dunlap said. “It is these two things together that allow us to develop ways to detect attempts at nuclear weapons and to verify international treaties.”

When the International Atomic Energy Agency sought a mechanism for monitoring uranium enrichment processes to help verify that nuclear nonproliferation treaties were being followed, the agency turned to ORNL to lead a multilab effort to develop the technology.

“IAEA is now using this technology to verify that Iran follows the rules of the 2015 international nuclear treaty,” said Cecil Parks, director of ORNL’s Nuclear Security and Isotope Technology Division. “Building on past technology, we developed a system called an online enrichment monitor, which houses sensors and detectors inside a sealed, tamperproof container. It continuously monitors a key process involved in uranium enrichment to ensure that levels stay within the limits needed for peaceful purposes such as research and nuclear power.”

Another recent example is the work of ORNL nuclear physicist Chris Blessinger to solve a problem that had bedeviled researchers in the radiation detection field for some time.

“I was testing radiation detectors used to prevent high-risk materials from being illegally transported across borders,” Blessinger explains. “To test the detectors and get accurate, consistent measurements, we needed large and uniform samples of uranium and plutonium.”

One problem was that federal security, criticality safety, radiological safety, and transportation regulations created significant inconveniences and made this type of testing cost prohibitive; shipping a solid piece of uranium of the size needed cost $60,000. He found that colleagues at other labs faced the same issue. Some had devised thin sheets of uranium foil, some had created discs in the shape of hockey pucks, some used whatever scraps they had on hand. The result was inconsistent testing results that didn’t fully capture the effectiveness or weaknesses of the detectors being tested.

Blessinger began brainstorming. Working with chemists, machinists, engineers, and others across the lab and at the Y-12 National Security Complex, he created several prototypes. The final design was a 3-D-printed hollow sphere made of titanium. Slightly larger than a softball, its surface is made of metal-encapsulated ceramic tiles loaded with uranium or plutonium. Because he carefully designed the device to comply with numerous regulations, it can be shipped commercially and handled more freely within the laboratory. The result is better test results, greatly reduced costs, and, in the end, more effective detectors that help prevent the smuggling of high-risk materials that could be used to make nuclear weapons.

The lab has enhanced nuclear nonproliferation efforts in more than 109 countries by developing next-generation technology, conducting training, and setting standards in security culture and best practices.

One team of ORNL and Y-12 scientists and engineers has been deployed twice to Iraq to retrieve dangerous nuclear materials using the lab’s Mobile Uranium Facility. The team, which has jokingly referred to itself as the “Uranium National Guard,” trains every couple of years in various geographical environments to prepare for future deployments.

“In one situation, not only were we preventing the materials from falling into the wrong hands, but we were protecting the townspeople. Families had begun taking contaminated equipment from an abandoned facility into their homes,” said mechanical engineer Jim Radle, who leads the team.

A common thread in discussions with ORNL scientists and engineers is the sense of purpose they feel in their life’s work as they support national security through scientific and technological endeavors.

Nineteen years after his initial discovery, Klett continues materials science research and development of the graphite foam for emerging military needs in extreme environments. “What gives me purpose and direction is seeing the endgame. If the military comes to us with a problem, and I can envision how to develop this basic science discovery for a specific application that saves the life of a soldier on the battlefield, how could I not follow through?”