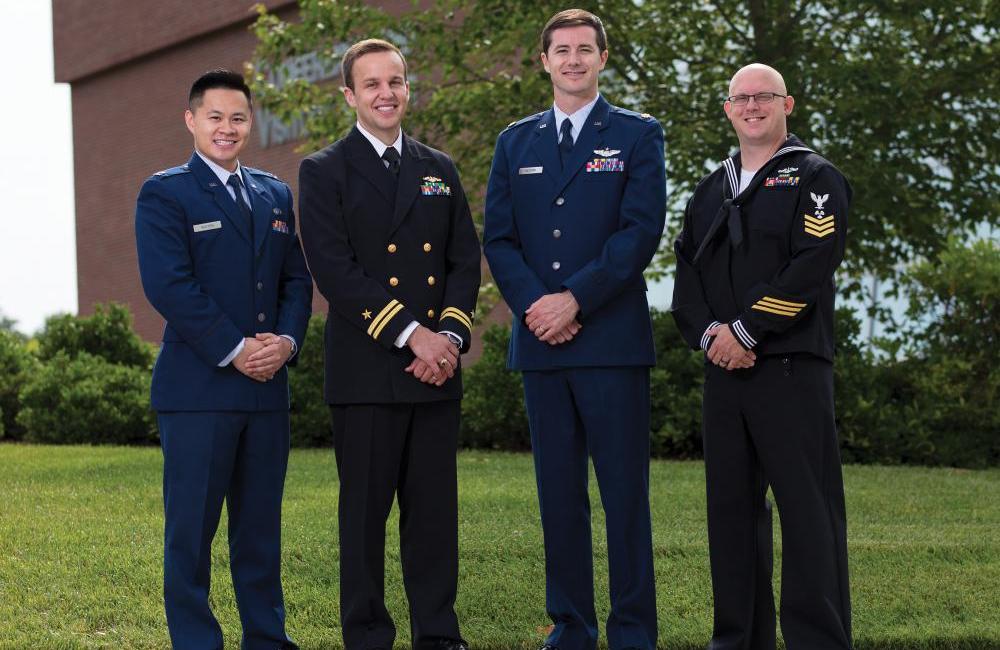 Despite being landlocked in the hills of East Tennessee, fast-attack submarine Lt. Eric Stromme of the U.S. Navy found himself engrossed in his work at ORNL.

During a one-year assignment at the lab, his most memorable project was a groundbreaking experiment that tested an engine made from an aluminum-cerium alloy developed by ORNL. The alloy both improves the energy efficiency of engines and expands the market for cerium, an underused product often discarded during the mining of rare earth minerals.

“The national lab brought all the pieces together in one place to tackle this challenge,” said Stromme, noting that the research team created an alloy, 3-D-printed the mold for the engine, and then conducted neutron analysis on the running engine to test the alloy’s performance.

The test results verified that the alloy could indeed be used to make a lighter-weight internal combustion engine that can withstand high temperatures, allowing more complete fuel combustion. Stromme, who worked under the guidance of ORNL scientist Orlando Rios on the project, was on deck at the lab when ORNL announced that Wisconsin-based manufacturer Eck Industries had decided to license the alloy for commercial applications.

“One of the goals the Navy had for me was to learn how the lab applies technology so that I could suggest ways that the Navy can deploy new technology more quickly into the fleet,” said Stromme, whose degree is in mechanical engineering. “The aluminum alloy project is a great story in that regard. From the time the scientists had the idea until it was licensed with a manufacturer took only three years.”

“The lab is good at promoting a collaborative environment, not just between researchers and leadership but also between departments, other labs, and industry,” Stromme said, noting that ORNL partnered with Ames and Lawrence Livermore national labs as well as an industry partner on the project. “At the lab there is an awareness that you are competing for top talent; people make sure to let others know that their opinions are valued.”

Stromme’s assignment at the lab was part of the Navy’s Tours with Industry program, in which Navy personnel are placed with organizations such as Amazon, Apple, and Lockheed Martin for one-year assignments. Also on board at ORNL was Navy machinist’s mate Michael D. Garner, who worked at the lab’s High Flux Isotope Reactor.

ORNL has hosted 45 military and civilian defense personnel for temporary work assignments since its military education and outreach program began in 2002.

David Landguth of ORNL’s Global Security Directorate, who has managed the program since 2012, pairs visiting military personnel with a research experience tailored to the individual’s expertise and interests.

“He connected me with researchers and engineers at the vehicle security lab,” said Starr, whose next Air Force assignment will be as an F-35 experimental test pilot. “I did a deep dive into cyber-physical research that directly related to aircraft security and an issue near and dear to my heart, which is the ability of a vehicle operator to be alerted at the onset of a hack.”

Starr worked closely with ORNL engineers at the lab’s National Transportation Research Center on a project designed to detect, intercept, and prevent cyberattacks on moving vehicles.

“This research has direct application within the Defense Department as well as for civilians,” Starr said. “We’re demonstrating that bringing the vehicle operator into the loop at the earliest point of detection can prevent a catastrophic event, whether for a commercial airliner or a transport truck carrying toxic chemicals.”

When space lift engineer Nguyen came to ORNL, he switched gears from launching rockets for the Air Force to working with the latest flying platforms—drones and other unmanned aerial vehicles.

“I assisted the Unmanned Vehicle Development Lab with a new system that improves communication between operators and remotely piloted vehicles,” said Nguyen, an aerospace engineer whose previous assignment with the Air Force involved launching satellites into orbit from Cape Canaveral, Florida. “Coming from a military background, I gained a new perspective in problem-solving by working with the UAV technical team. That by far is the greatest takeaway from my time at Oak Ridge.”

The one-on-one interaction of the lab’s researchers with defense personnel is the heart of the lab’s military education and outreach program, said retired Navy Vice Admiral Kendall Card, who is the director of intelligence programs in the Global Security Directorate.

“Perhaps the greatest benefit to having these military folks here at the lab is that they are our eyes and ears in helping us translate our basic science research into military applications that meet real needs out in the field, air, and sea,” Card said. “We pair them up with researchers, and the resulting collaboration is good for the military and good for the lab. They learn about the lab’s capabilities and methods of operation, and we learn about the military’s current, most pressing needs where we could be the greatest help.”

During one assignment at the lab, the Air Force’s Chris Nations teamed with carbon researcher James Klett, inventor of a lightweight graphite foam with high-thermal conductivity that the military uses in multiple applications.

“He and I sat down and brainstormed,” Klett said. “Here I was with an F-35 experimental test pilot who had a degree in astronautical engineering and who understood the potential for the application of the graphite foam. He suggested a specific idea that we hadn’t tried yet. We helped him put together a test rig, and he was able to demonstrate results.”