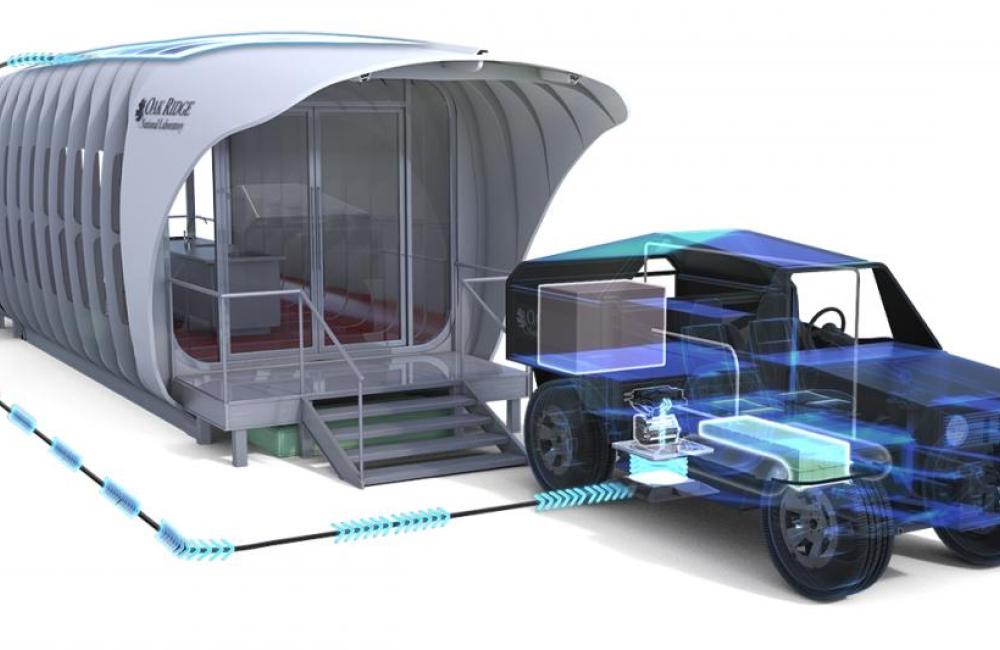 Additive Manufacturing Integrated Energy (AMIE) researchers examined various technologies and asked how wireless charging for vehicles, which typically routes from the power source to the vehicle, could function in the opposite direction—that is, from the vehicle to the power source. They envisioned an infrastructure that would allow a two-way exchange of energy to send power where and when needed.

The electrical energy flow demonstrated in the AMIE project is a good example of new technology that solves several energy problems at once, storing and supplying energy to both a building and a vehicle in various on- and off-grid scenarios.

The AMIE home can draw electric energy in the traditional sense from the grid to power lights and appliances. But AMIE can also collect electricity via solar panels and store it in secondary-use batteries located under the house. During peak times when people are using the most energy at home, AMIE can revert to stored power and not depend solely on the grid; this can help to relieve stress on an aging electrical infrastructure. AMIE’s groundbreaking technology shines when AMIE can “choose” from not only solar or stored energy, but also from the hybrid electric and natural gas-powered vehicle outfitted with a bidirectional wireless charging system linking the car with the house.

AMIE serves as a research platform to evaluate algorithms that can determine how energy is shared among available resources and can anticipate when power is available from the sun or when electricity is needed in the building. These algorithms serve as a “brain” to determine how to shift building loads (such as the heating, ventilation, and air-conditioning system [HVAC]) and provide the remaining energy needs with an optimal balance of power generation. The brain also coordinates with the algorithms in the end devices, such as the car and the HVAC, to ensure optimized power use. Routing electricity from the car to power the house wirelessly is a novel approach.

How does it work?

AMIE’s 3D-printed utility vehicle (PUV) runs on natural gas and powers the vehicle’s generator. Energy flows from the generator to the battery to the electric motor; when the PUV is parked, the coils align and the generator sends energy to a wireless charging pad on the ground. The charging pad sends electricity to the building to power the loads or charge the battery, which stores and supplies energy to the home. When the battery is fully charged, it can power both house and car. The resulting system can function as the home’s backup generator.

“We will have an electric car future, so why not make our electric vehicles work while they’re parked?” Ozpineci said. “If the power goes out, power generated wirelessly by the vehicle can automatically power the house.”

Ozpineci also envisions large parking lots in urban areas equipped with charging stations that, through bidirectional wired or wireless power transfer, allow people to recharge their electric vehicles, as well as provide power to nearby buildings in times of emergency energy needs.