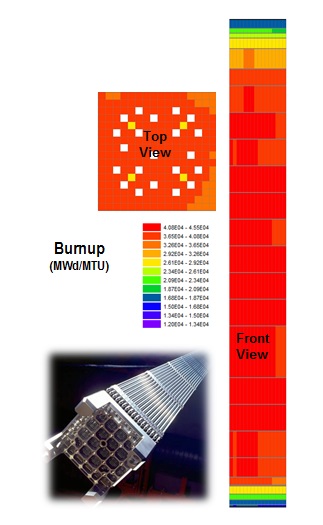 The Oak Ridge Isotope Generation (ORIGEN) code calculates time-dependent concentrations, activities, and radiation source terms for a large number of isotopes simultaneously generated or depleted by neutron transmutation, fission, and radioactive decay. Provisions are made to include continuous nuclide feed rates and continuous chemical removal rates that can be described with rate constants for application to reprocessing or other systems that involve nuclide removal or feed. ORIGEN includes the ability to use multigroup cross sections processed from standard ENDF/B evaluations. Within SCALE, transport codes can be used to model user-defined systems, and the COUPLE code can be applied to calculate problem-dependent neutron-spectrum-weighted cross sections representative of conditions within any given reactor or fuel assembly and then convert these cross sections into a library to be used by ORIGEN. Time‑dependent cross section libraries can be produced to reflect fuel composition variations during irradiation. An alternative sequence for depletion/decay calculations is ORIGEN-ARP, which interpolates pre-generated ORIGEN cross section libraries versus enrichment, burnup, and moderator density.

ORIGEN Assembly Isotopics (ORIGAMI) computes detailed isotopic compositions for LWR assemblies containing UO2 fuel by using the ORIGEN code with pre-generated ORIGEN libraries for a specified assembly power distribution. The assembly may be represented by a single lumped model with only an axial power distribution or by a square array of fuel pins with variable pin powers, as well as an axial distribution. Multiple cycles with varying burn times and down times may be used. ORIGAMI produces files containing SCALE and MCNP composition input for material in the burnup distribution, files containing decay heat for use in thermal analysis, and energy-dependent radioactive source for use in shielding calculations.

A series of 1470 pre-generated burnup libraries for use in ORIGEN and ORIGAMI are provided with SCALE for 61 fuel assemblies for commercial and research reactors.