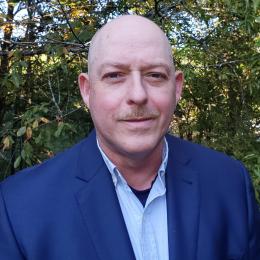 Jeff Delashmitt graduated summa cum laude with B.S in Chemistry from Tennessee Wesleyan College, and joined ORNL as a staff member in 1989.  He was activated as a reservist, and spent 1990-1991 serving in Saudi Arabia, Kuwait, and Iraq during Desert Shield/Storm.  Upon his return to ORNL, he joined the staff at the Transuranium Analytical Laboratory (TAL) where he served as a Shift Supervisor from 1991 to 2004 managing chemists and technicians providing radiological analysis of samples from technical staff conducting research and chemical operations associated with the production and purification of rare radioisotopes at the Radiochemical Engineering Development Center (REDC).  In 2005, Jeff became the TAL Laboratory Manager as the laboratory also became active in spent nuclear fuel studies.  Under his guidance, the TAL has established itself as a national leader in the analysis of spent nuclear fuels, the precise characterization of irradiated materials, and the development of new analytical protocols conducted in shielded hot cells and gloveboxes.  In 2020, Jeff assumed the title of TAL Group Leader, and he is currently tasked with leading the analytical effort in support of ORNL’s Pu-238 Production Program, ORNL’s Cf-252 Production Campaigns, and ORNL’s PIE plan for the Sister Rod Project.

The need for speed – Burnup determination of spent nuclear fuel...