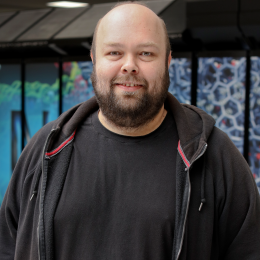 Gustav is a computational physicist that specializes in high-performance computing and quantum many-body methods for nuclear systems and quantum many-body methods for nuclear systems as well as the computational methods used in the operation of nuclear experiments and the analysis of experimental data from these experiments. He is the main developer and maintainer of NTCL, a domain-specific, hardware agnostic library that provides the intrinsic tensor operations necessary for nuclear coupled-cluster calculations at scale on Summit and Frontier. He is a co-developer of the computing pipeline for the GRETA project. GRETA is a gamma-ray tracking array currently under construction that will be used to study atomic nuclei at FRIB at MSU. He is also a co-developer of the signal decomposition software that is used in the online analysis of experimental data from GRETA.

Gustav got his PhD in Physics from the University of Oslo in 2012, before spending time as a post-doctoral research associate at the University of Tennessee, Knoxville. In 2015 he joined the scientific computing group at ORNL and is now member of the Advanced Computing for Nuclear, Particles and Astrophysics group.

Gustav was first introduced to HPC when using the Jaguar system at OLCF during his PhD, which sparked the decision to pursue a career in HPC at ORNL. Since then, he has been writing applications that run at scale on OLCF systems, running scientific campaigns on these system through INCITE and worked towards bringing additional users from the nuclear physics community to OLCF.

Charge, neutron and weak size of the atomic nucleus...