This paper presents historical results of graphite irradiation-induced creep experiments that were performed at Oak Ridge National Laboratory from the 1950's to the 1970's. These experiments were performed at temperatures from 150°C to 1000 °C, and bend stresses ranging from 500 to 5000 psi (∼3.3–34.5 MPa). The experimental setup utilized in-situ measurement of specimen displacement, on-line applied stress control, and the ability to change stress during the experiment. The different stress conditions showed that the primary creep strain and the steady-state creep rates both have a linear stress dependence. The temperature range used in this work resulted in trends that have not be previously presented in the literature: 1) a linear dependence of primary creep strain on temperature, and 2) the shape of steady state creep rate versus temperature (see graphical abstract). The maximum dose in the specimens was 0.9 dpa, which is sufficient to achieve steady-state creep without the structural changes that alter the observed creep behavior. The results from this experiment provide evidence that dispels that the pinning-unpinning model describes the mechanism of irradiation creep in graphite. Instead these results suggest a dislocation climb mechanism is the probable mechanism for creep within the crystalline regions. 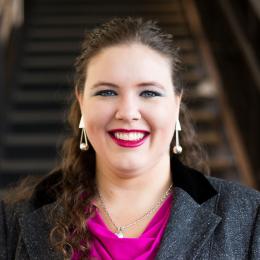