Verity Salmon: Investigating carbon cycles at the top of the world

While some of her earth system modeling colleagues at Oak Ridge National Laboratory face challenges such as processor allocation or debugging code, Verity Salmon prepares for mosquito swarms and the possibility of grizzly bears.

Salmon is an ecosystem ecologist specializing in cold and high-latitude environments. As part of her work, she collects field samples at the Next Generation Ecosystem Experiments (NGEE) Arctic project in Alaska and the Spruce and Peatland Responses Under Changing Environments (SPRUCE) site in northern Minnesota. Both projects seek an understanding of how plants, soils, and the atmosphere are cycling carbon. That empirical data then feeds into earth system models designed to predict environmental change.

“I'm particularly interested in how the carbon balance of these ecosystems is impacted by things like nutrients: the components, minerals and metals that are required for plant and microbial growth and activity” Salmon explained. “I want to understand how the pace of those cycles might shift with climate change and how it might impact the large-scale carbon balance of the system.”

It’s one thing to have a mind’s eye view of what an ecosystem looks like and how it might function. “But when you’re out there tromping around carrying your equipment, you notice new things and really understand the physical interaction of the different ecosystem components,” she said.

The field work is challenging. For the current phase of NGEE Arctic, she and her colleagues prepare for long drives into the Arctic tundra along gravel roads from a base station that may sit some 70 miles away on Alaska’s Seward Peninsula. “If you don’t have your supplies, your science simply will not go off. I run a lot of spreadsheets for ordering and protocols months in advance to make sure everything comes together in the field,” she said. “It also requires flexibility because you can’t plan everything. No spreadsheet will control the weather.”

During the two- to three-week periods that scientists spend there, they may walk several miles each day across open tundra to collect samples. “That might sound like walking in a field, but it’s actually very bumpy and you’re sort of flailing around on these sedges,” Salmon said.

“We’ve also seen some amazing things. One September when I was collecting samples on leaf-litter resorption of nutrients we saw hundreds of sandhill cranes circling around on the updrafts while they were migrating south,” she remarked. “We also see a lot of show-stopping color in the fall on the shrubby vegetation—yellows, purples and reds. It’s just beautiful.”

As for wildlife interactions, “I really prefer them to be at a distance,” Salmon said. “We’ve seen a family of grizzlies eating berries at one of our plots through our binoculars. Then we just have to turn around and leave, hoping it’s better the next day and letting other groups of scientists know about the sighting. So you plan for everything and you make the best of it when it’s out of your control.”

Prep work includes daily weather assessments, pre-departure briefings, communicating your location throughout the day with GPS, making sure you have a full tank of gas before leaving town, wearing protective clothing, bug spray and nitrile gloves to keep insects from biting, meal prep, preparing coolers for samples, and of course lots of driving and hiking with heavy packs.

“Hiking back to the vehicle is usually a slow walk when you might have as many as 100 soil samples added to your pack,” Salmon said. “And with the long days in the Arctic, it can sometimes be hard to remember when meal time is, so I’ll set alarms for that. If things are going well, you might end up spending 10 or 12 hours in the field. I usually make sure we have some gummy bears for the long drive back to town.” Back at the base, the crew logs data and answers email if the Wi-Fi is good, then prepares for the next day.

The environment at ORNL encourages interdisciplinary teamwork, Salmon noted, including her direct interaction with the modeling community. “It’s not just me writing a paper about the best number or rate based on my data. It’s an iterative process where we’re figuring out things like how nutrient cycling is presented in the models: Where do we not have enough data for the modelers to parameterize a process? What’s missing in the model?  All of these things come together in a more direct way than they would if the information had to cycle through the literature and across different university departments.”

Salmon has always had an interest in environmental science, having grown up with a father who was an ecotoxicologist for state of California, and a mother who operated a landscape design business specializing in California native plants. “I guess you could say that my dad's interest in system-level impacts and chemistry, combined with my mom's native plant business sort of melded together into my interest in plant nutrient cycling,” she said.

Salmon attended her first college class at the age of six, as her mother enrolled in classes to learn more about native plants and couldn’t leave her daughter at home. “I would also go on these field trips with my mom that involved plant identification, so I was a plant spotter at a young age. I have to say I’m still not that great at plant ID, so I’m thankful that working in these northern latitudes there’s not a lot of diversity in the vegetation,” she laughed.

Migrating south: The science after the sampling

Salmon attended Boston University as an undergrad, earning a Bachelor of Arts in biology and developing an interest in soil science. She then went to work for the Marine Biological Laboratory in Woods Hole, Massachusetts, and took on the role of technician at their Arctic Long Term Ecological Research Site on Alaska’s North Slope. It was during this time that Salmon realized that it wasn’t enough to just work in the field; she also wanted to perform the science after the sampling.

She decided on the University of Florida after visiting the campus and learning of a manipulative field experiment one of the professors had in progress at which she could study the nitrogen cycle in the permafrost. “I’d never been to Florida, and when I flew there from Boston in February, there was all this beautiful sunshine and we saw 10-foot alligators sunbathing in the swamp. Those sandhill cranes who fly south every year – they’re onto something. So I started doing it too.”

Salmon delved into the quantitative side of science pretty quickly, building up skills in programming and statistical modeling as part of her PhD work. As she was wrapping up her dissertation, she heard about a postdoc opportunity with Colleen Iversen at ORNL.

“Colleen had written this awesome review paper on tundra plant roots as part of the NGEE Arctic project,” Salmon recalled. “She managed to pull all this data that was scattered and sparse into one place. It was much easier to reference than searching through 50-year-old papers that someone may or may not have photocopied in the right order when they were digitized. She was a great resource for people thinking about below-ground plant processes.”

Iversen “has been an amazing mentor to me both personally, and as a young woman in science,” Salmon emphasized. “One of the positives to this job is to work with her and the team that she's assembled, pushing forward comprehensive science.”

Hard work that makes a difference

Salmon was also very interested in ORNL’s large-scale manipulative experiments such as SPRUCE that study the carbon cycle. She applied for and was accepted to the postdoc position in November 2016, and was hired as R&D staff in September 2019.

“I was very excited to not only work in a system I know like the Arctic, but also at a boreal site like SPRUCE where we have a manipulative framework to explore,” Salmon said. “A framework where you throw a wrench into the engine and see what breaks to understand how factors like nutrients, carbon, water and energy all are linked together. And the thread that ties the two projects together for me is the goal of improving large-scale earth models.”

Looking to the future, Salmon sees ecosystem ecologists working more closely with geneticists to get a better understanding of the gene-level control of ecology. Those two fields are already reaching out to one another, she noted. “We could start to make those ties related to nitrogen fixation, which is a process I've been researching while here at the lab. Vegetation mapping with remote sensing and artificial intelligence is also pretty exciting. If my data at the level of grams-per-meter-squared can be plugged into a map of the entire Arctic, we can begin to understand landscape-level variability.”

Her advice to young scientists? “Work on something that you think matters. Working on difficult things can be challenging but motivating in the long term. You feel like you're making a difference. And I think if you assemble the right team, progress can be made.”

Salmon, along with some 60% to 80% of the rest of ORNL—began telecommuting from home in mid-March 2020, following guidelines on social distancing to flatten the curve of the COVID-19 pandemic. She said it’s been hard to be away from her lab and her sampling work.

“But I think that it's useful sometimes to take a step back from that day-to-day problem solving, and the result is you find time do to other kinds of work— lots of writing, for instance,” she noted. “I’m also getting the chance to talk to people in my research area that I haven’t necessarily spoken with on a very regular basis. Yesterday, I guest-lectured for a course that’s being taught by a friend online at the University of Virginia. So now I’m able to bring a slice of research into that classroom and engage with students. That’s a silver lining—we’re interacting during this time with people in different ways.” 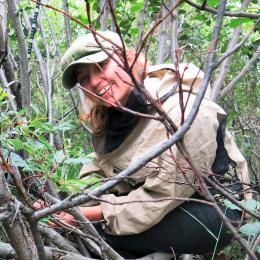