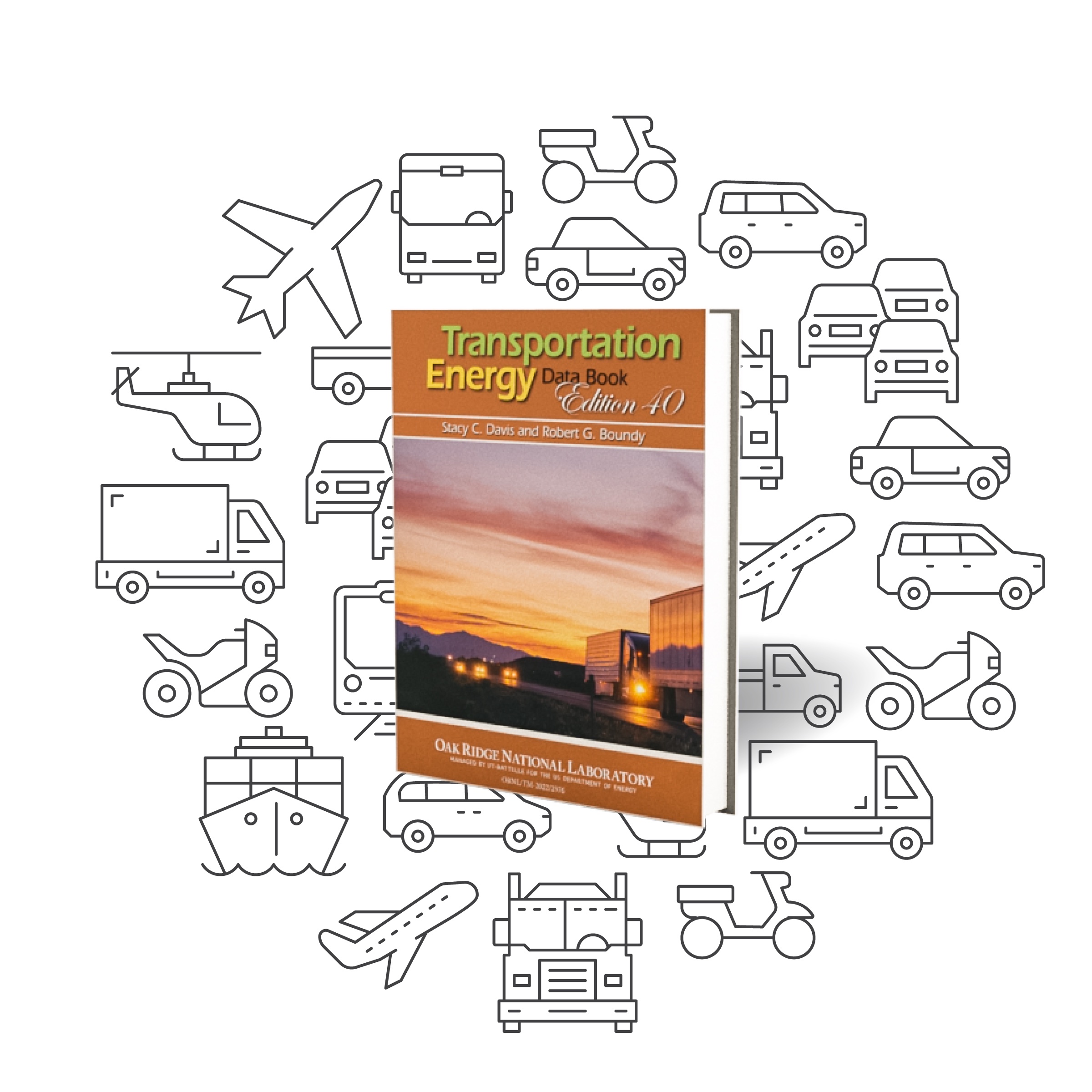 Data on the nation’s petroleum consumption and energy use across all modes of transportation — from cars and trucks and motorcycles to cargo ships, rideshares and even motorized scooters — is presented in DOE’s Transportation Energy Data Book, compiled by ORNL researchers. Credit: ORNL, U.S. Dept. of Energy.

It’s been referenced in Popular Science and Newsweek, cited in the Economic Report of the President, and used by agencies to create countless federal regulations. For decades, the Department of Energy’s annual Transportation Energy Data Book has tracked trends in U.S. transportation, serving as the definitive guide for industry, policymakers, researchers and consumers. The most recent version is now available online, marking the book’s 40th edition.

Produced and maintained by Oak Ridge National Laboratory in collaboration with DOE’s Vehicle Technologies Office, the widely acknowledged book holds more than 1,000 citations in scholarly reports to date and its impact is felt internationally, too, as automakers use the information to support the engineering of energy-efficient vehicles. Data on the nation’s petroleum consumption and energy use across all modes of transportation — from cars and trucks and motorcycles to cargo ships, rideshares and even motorized scooters — is presented through easy-to-use tables and graphs. The book also serves as the reference for the Transportation Fact of the Week, distributed weekly by ORNL through DOE’s Office of Energy Efficiency and Renewable Energy website.

ORNL’s Stacy Davis, lead author for the data book since its 10th edition, works with more than 150 sources to update information. She said that over the years, “the book has become a mainstay in the arsenal of transportation statistics.”

“Every year we improve on the usability,” she said. “For example, you can type the word “scooter” in the data area’s search box and all the tables specific to that transportation mode will populate so that you can then click and download information in an exportable file. Our goal is to continue to make it easier for the user.”

While the book is grounded in transportation trends of the present and the near future, its beginnings go back more than 40 years and, in fact, predate DOE. Davis said the inaugural Transportation Energy Data Book was named the Transportation Energy Conservation Data Book and published in 1976, when oil was embargoed and the nation focused on conserving energy. Davis also notes that back then, decisions needed to be made to help curb growing energy demand.

“U.S. officials had to make some changes regarding transportation and gasoline and oil, but they didn’t have good data or a resource where they could look at all of this in one place to help make policy decisions,” she said.

Under the newly formed Energy and Research Development Administration — a precursor to DOE, which was formed in 1977 — data was first compiled on the price of crude oil and the amount imported as well as how many miles people were typically driving in a year. This type of information, Davis said, ultimately helped Congress set policy to guide the nation during a challenging time.

“When I started working on this project in 1986, we had no computer desktops like we have today. Much of it was done manually or using mainframe computers,” she said. “This was the case for that very first edition, too. The book was meant to exist as a physical copy that could be kept on a desk and accessed as needed.”

Manually inputting data with a typewriter meant it took substantial time to produce, as well.

“Now that we have computer software to help with graphs and charts, and of course, the internet, we’re able to produce an annual book,” she said. “Computer technology improved the speed of publishing and enabled the creation of a living document online that can now be updated whenever necessary.”

From the oil challenge of the 1970s to the push for unleaded gasoline in the 1980s, the data book has tracked the transportation appetite of the U.S. per decade and its impact on energy consumption. Consistently over the years, passenger transportation — made up of light-duty cars, vans, pickup trucks and SUVs — consumes more energy than all modes of freight transportation including heavy trucks, marine and rail combined. The transportation sector, overall, also remains the largest consumer of petroleum.

Although transportation continues to be the largest contributor to greenhouse gas emissions, with carbon emissions from burning petroleum for cars, trucks, ships, trains and planes remaining the primary fuel source, the sector is shifting toward clean energy. Decades of data compiled from the book have helped inform the U.S. Environmental Protection Agency on policy decisions that support clean energy by setting limits on the amount of pollution a vehicle or engine can emit. The data has also supported the implementation of the U.S. Department of Transportation’s Corporate Average Fuel Economy, or CAFE, standards. These standards mandate an average fuel economy for new cars, SUVs, vans and pickups. Davis said the focus on petroleum reduction and clean energy has had an impact on the automobile industry, leading to manufacturing vehicles made largely from lightweight materials to improve fuel economy and the production of high-efficiency engines that can run on alternative fuels such as ethanol.

“There was a time when we thought all vehicles in the future would run on E85, which is a high-level ethanol gasoline blend,” Davis said. “Now, we know there are many other alternative energy sources for vehicles such as hydrogen, biofuels and electricity.”

Although more hybrid and plug-in electric vehicles are on the highways, the Transportation Energy Data Book started tracking their usage when they came on the market in 1999 and 2010 respectively. As of 2020, vehicles that use a blend of fuel and battery power captured 3.2% of the light-vehicle market while electric vehicles accounted for 1.7%. Dating back to 1991, there were only two alternative fuel vehicles on the market. By 2020, 130 different models were available for consumers to choose from, with 64% of them plug-in hybrid electric and 19% fueled by E85.

“We have tables that show how much a typical household drives in a day and that was a resource for industry to consult when deciding to manufacture plug-in hybrids,” she said. “Industry was aiming for a certain electric range for plug-in hybrid vehicles because they could see in our data that the production could be supported.”
In the immediate future, Davis anticipates the number of electric vehicles to increase significantly.

“These types of vehicles are more accepted now and not seen as a novelty,” she said. “There’s more access to charging stations, too, and vehicles can travel longer on a charge. For example, the electric vehicle with the longest range that we have on the market today can go 500 miles on a charge. How many people do you know that typically drive that many miles in one day on their personal vehicle?”

Davis transitioned a few years ago to driving a plug-in hybrid vehicle, choosing one rated for 45 miles of range. She said she can almost make her daily work commute roundtrip on a single charge without using the gasoline engine. Plus, she saves about a $1,000 a year from not filling up at the pump.

“Circling back to the 1970s, we had information on batteries and electric vehicles even then, but there were several roadblocks at the time that science and industry couldn’t get past,” she said. “Now, the future is wide open to electric. I do believe, going forward, that this is the way.”

As the transportation market continues to transform over the next decade, Davis plans to continue documenting with supporting data.

“So many individuals, both nationally and internationally, have used the Transportation Energy Data Book for years and years as a mainstay. It’s where they look to for transportation statistics, so the impact on the transportation sector is evident,” she said. “As long as there’s data to report, I’ll be documenting for future generations.” 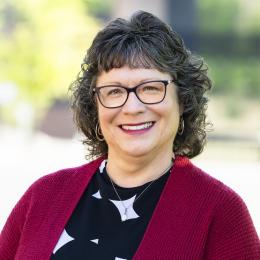