Mark Roberts was working on a machine, trying to attach a tricky fitting to the end of a pipe while holding three other components in place, and he realized he could use another hand.

So he went back to his desk, gave it some thought, and came up with the next best thing: a custom, 3D-printed tool to hold the valve in place and keep the other components aligned, leaving his hands free to attach the fitting.

As a mechanical technician in the Enrichment Systems Engineering Section, Roberts needs to complete this particular task fairly regularly.

“It was a real pain to get in there and do that,” he said. “After doing my first one, I started trying to figure out a way to make it easier and more reliable.”

Roberts — who worked as a machinist, toolmaker and design engineer before coming to ORNL in June 2021 — began by mentally running through a few ideas for a tool. Then he made a few drawings, refining the design in the process. Finally, he was ready to 3D print the tool and test it.

“The first one worked, but then I improved on it,” Roberts said. “I ended up with three revisions.”

“Everybody in my group uses them now,” he said.

It was the first of several small tools he invented to make his team’s work easier. Next, he made a device to bend a copper tube that has to be installed in an area too tight to use a standard tube bender. He’s applied for a patent for another invention, a combination clip with tracks to hold different diameters of tubing — in this case, air lines and wires — in place.

“Around the world, in different industries, there are similar things, but nothing just like this,” Roberts said. “This type of piece typically holds only one size, and this one can accommodate multiple sizes in the same clip. We’re currently using this on a high-profile project.”

“It was great because it got him, and the rest of the team, thinking outside the box,” Henkel said. “Since then, we’ve probably made up to 10 different small tools to help us do various things.”

Now, a 3D printer sits at Roberts’ desk, and anyone on the team can use it. Henkel said team members can quickly create a tool, print it overnight, test it the next day, and tweak it — both to improve the original function, and to modify it for use in other situations.

Roberts said the team regularly brainstorms as a group, recognizing that an idea that won’t work might inspire a better idea that will.

“When we start putting a system together, you’re doing it in the field, and there may be obstacles you have to overcome to put it in place,” Roberts said. “You’re solving problems a lot. You get to think about stuff and come up with ideas as a group, and you get to trial things and see it works, and you learn and grow from that — individually, and as a group.”

Roberts said he learned many of the skills he uses at ORNL on the job, without formal training. His father owned a machine shop when he was growing up, and he started his career as a machinist. Roberts had a passion for engineering but wasn’t able to complete college early in his life; instead, he worked as a toolmaker for a decade and then moved into design engineering. In the course of 18 years performing design work for a railroad manufacturing company, he taught himself computer 3D modeling.

“I had an aptitude for the 3D world,” he said. “Much of it was informed by my machine background; you have to be able to see a part in 3D to make it.”

Roberts ultimately did complete his Associate of Manufacturing Engineering degree and is now pursuing a project management degree online from Bellvue University.

Henkel described Roberts as “a phenomenal creator” and a “meticulous hands-on individual” who’s quick to teach others his skills.

“I like being able to share knowledge and help us all improve,” Roberts said. “It’s all about continual improvement. I want the person next to me to be able to share something, too, that I learn from. On our team, everybody tries to elevate each other.” 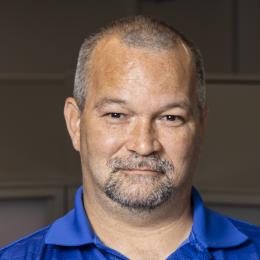 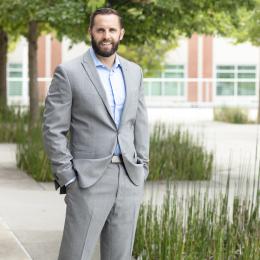