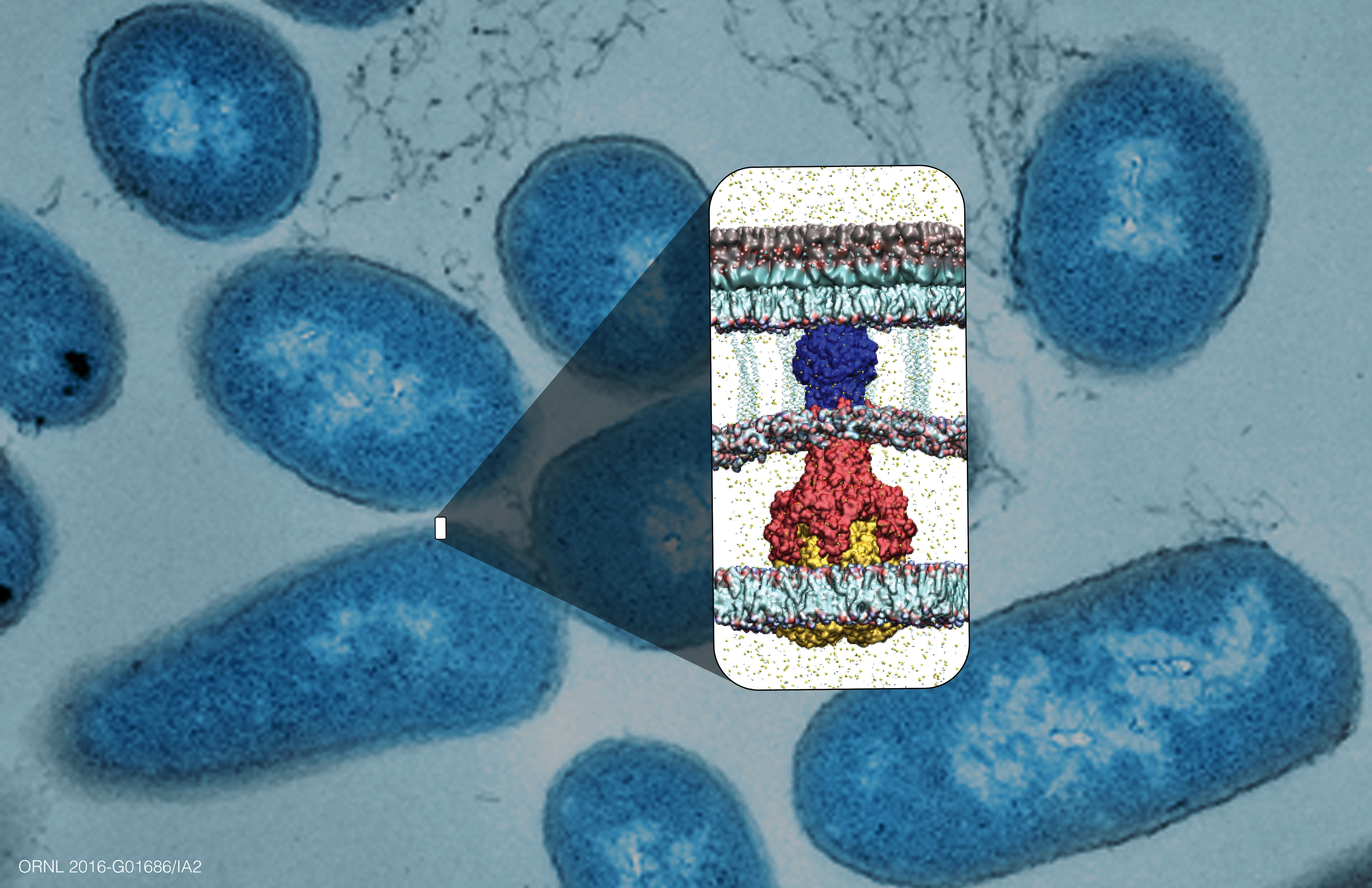 OAK RIDGE, Tenn., Nov. 17, 2016 – Supercomputer simulations at the Department of Energy’s Oak Ridge National Laboratory have played a key role in discovering a new class of drug candidates that hold promise to combat antibiotic resistance. In a study led by the University of Oklahoma with ORNL, the University of Tennessee and Saint Louis University, lab experiments were combined with supercomputer modeling to identify molecules that boost antibiotics’ effect on disease-causing bacteria.

The researchers found four new chemicals that seek out and disrupt bacterial proteins called “efflux pumps,” known to be a major cause of antibiotic resistance. Although some antibiotics can permeate the protective barriers surrounding bacterial cells, many bacteria have evolved efflux pumps that expel antibiotics back out of the cell and render the medications ineffective.

The team focused on one efflux pump protein, known as AcrA, which connects two other proteins in a tunnel shape through the bacterial cell envelope. Disrupting this centrally positioned protein could “throw a wrench” into the middle of the efflux pump and mechanically break it, unlike drug design strategies that try to inhibit overall biochemical processes.

“As a first in this field, we proposed the approach of essentially ‘screwing up’ the efflux pump’s protein assembly, and this led to the discovery of molecules with a new type of antibacterial activity,” said co-author Jeremy Smith, who serves as a UT–ORNL Governor’s Chair and director of the UT–ORNL Center for Molecular Biophysics. “In contrast to previous approaches, our new mechanism uses mechanics to revive existing antibiotics’ ability to fight infection.” Details of the study were published in ACS Infectious Diseases.

Through laboratory experiments done in tandem with extensive protein simulations run on ORNL’s Titan supercomputer, they scanned large numbers of chemicals to predict and select which would be the most effective in preventing AcrA proteins from assembling properly.

“The supercomputing power of Titan allowed us to perform large-scale simulations of the drug targets and to screen many potential compounds quickly,” said Helen Zgurskaya, head of OU’s Antibiotic Discovery and Resistance Group, who led the study. “The information we received was combined with our experiments to select molecules that were found to work well, and this should drastically reduce the time needed to move from the experimental phase to clinical trials.”

Using computational models, researchers screened various combinations of molecules and proteins to determine which ones “fit” well together, similar to finding the right key for a specific lock. This process was complicated by the protein’s dynamic nature; proteins constantly change their shape. In a simulated environment, researchers created virtual representations of the proteins, generated a series of protein “snapshots” in their various configurations and used Titan to “dock” thousands of molecules to each snapshot and estimate how strongly each would interact with the protein.

“The first screening took only 20 minutes using 42,000 processors and yielded several promising results,” ORNL’s Jerry Parks said. “After more extensive analysis, we narrowed down our list to predict which molecules were most likely to disrupt the function of the efflux pump.”
The research team members at the University of Oklahoma then conducted laboratory experiments to confirm the disruption of the efflux pump and the antibiotic-reviving capability for four of the molecules selected. Saint Louis University researchers then synthesized structural analogs of the discovered efflux pump inhibitors and identified properties essential for their activities.

The team’s study focused on a prototypical type of efflux pump found in Escherichia coli bacteria, but the researchers anticipate that their antibiotic-reviving approach will be applicable to many Gram-negative bacteria. They plan to leverage a recently awarded Innovative and Novel Computational Impact on Theory and Experiment (INCITE) allocation from DOE to perform larger simulations on the Titan supercomputer to gain deeper understanding of how bacterial efflux pumps function, identify more potent efflux pump inhibitors and optimize the best antibiotic-plus-inhibitor combinations to make them suitable for clinical trials.

The Titan supercomputer is part of the Oak Ridge Leadership Computing Facility, which is a DOE Office of Science User Facility.