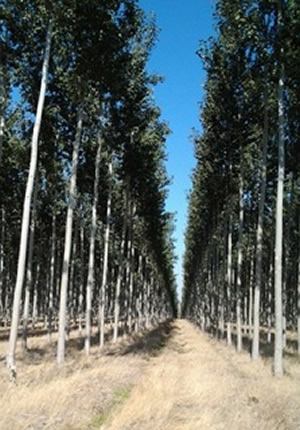 February 16, 2015 — Through drought and flood, winter freeze and summer heat, and the occasional deer nibble or beaver gnaw, trees stand sturdy. Partly, trees can thank genetic makeup, refined through millennia, for the ability to overcome much of what Mother Nature hurls their way.

But the same genes responsible for a tree’s hardiness also make it difficult and costly to produce plant-based ethanol for biofuels. With poplar trees, however, this notion could soon be turned on its head.

In studies involving 1,100 poplars, researchers at the Department of Energy’s BioEnergy Science Center at Oak Ridge National Laboratory used whole-genome resequencing and intensive phenotyping to pinpoint mutations desirable for producing biofuel from poplar trees grown in a variety of environmental conditions. The findings, published in BMC Genomics, could lead to more efficient ways of breeding high-ethanol-yielding poplar and other tree species.

A major obstacle to producing ethanol for biofuels from plants is lignin, the polymer that gives strength or “woodiness” to a stalk or trunk. Lignin forms a tough protective coating around cellulose fibers and makes it difficult to deconstruct these fibers into fermentable sugars needed to make ethanol. Making cellulose fibers accessible to such deconstruction by reducing cell wall lignin content is a major objective for DOE’s BioEnergy Science Center.

In their study, the researchers – who collaborated with scientists from West Virginia University, the University of British Colombia, and DOE’s Joint Genome Institute and National Renewable Energy Laboratory – wanted to know which genes caused low lignin levels in poplar trees. This task, according to the ORNL Plant Systems Biology group’s Wellington Muchero, would have traditionally taken “decades” before the advent of whole-genome resequencing, high-throughput phenotyping and association mapping techniques.

“The biggest challenge in working with trees is that it’s very difficult to identify specific genes that cause characteristics of interest,” he said.

Poplars are a desirable biofuel feedstock because they grow quickly and are diverse, surviving in vastly different environments—from moisture-saturated riverbanks to high and dry elevations. Depending on location, different DNA mutations accumulate over time such that traits like lignin content or biomass yield may be more or less pronounced in a particular ecosystem.

To compare poplars from different ecosystems and thereby narrow down the genes that might be associated with lignin content, the researchers gathered a collection of trees from poplar groves along the west coast of the U.S. up to southwestern Canada. To cover a diverse range of environmental conditions, the trees were planted in experimental plots in California, Oregon and British Columbia. At the same time the Joint Genome Institute, a DOE Office of Science User Facility, resequenced each of the 1,100 tree’s genomes.

Using statistical genetics, the researchers were able to identify specific DNA mutations that were consistently correlated with low lignin content across different experimental plots, an attribute desirable for biofuel production.

But the work didn’t stop at low lignin.

“The way we designed our study was to not only identify the genes and mutations that cause low lignin content but also to assess the performance of plants with low lignin in different environments facing different stresses from drought to disease resistance,” Muchero said.

That’s because it has long been thought that plants with low lignin have weaker cell walls and might end up being more vulnerable to environmental stresses, with loss of resistance to diseases being of major concern. The research, however, didn’t show any evidence for cause to worry.

“It has been surprising that some of our low lignin lines have been some of the best performing across environments,” Muchero said.

Additionally, while the study focused on genes related to low lignin, the wealth of genome data will also allow the researchers to tag genes associated with other expressed traits such as biomass production, disease susceptibility and ability to grow in harsh environments, driving the potential for poplars to be modified and grown successfully on poor-quality or marginal land. By growing in less desirable environments, land for food production wouldn’t need to be sacrificed for poplar or other tree stands meant for biofuels.

“We need to arrive at a point where we can produce biofuels economically and not compete with food production,” Muchero said. “That’s a major selling point for using perennial trees like poplars as biofuels feedstocks.”

For companies and individuals interested in growing poplars for biofuels, insight about the tree’s genetic characteristics may provide enough information that poplars could be tailored to grow at maximum potential in a location that previously might not have been suitable. With poplar genomic data handy, poplar growers could assess and select genes and, therefore, specific trees optimal for production in a specific area. Muchero calls it a poplar “super tree.”

“You want your super tree,” he said. “It has good growth, it’s resistant to diseases, it can grow in very marginal environments, and it has low lignin, which gives you tons of biofuels.”

To efficiently and cost effectively derive biofuels from poplar “super trees,” the first step is breaking down lignin. The second is to incorporate genes to grow a thriving poplar.

In other words, sugar, then splice.

Anthony Bryan, Jin-Gui Chen, Priya Ranjan, Sara Jawdy, Lee Gunter and Gerald Tuskan of ORNL also contributed to the study. The BioEnergy Center, supported by the Office of Biological and Environmental Research and Office of Science, along with the Genome British Columbia Large Scale Applied Research Program provided funding for the project. Part of the research was conducted at the Joint Genome Institute, a DOE Office of Science User Facility.