OAK RIDGE, Tenn., June 11, 2018 — Led by the University of Manchester, an international team of scientists has developed a metal-organic framework material (MOF) that exhibits a selective, fully reversible and repeatable capability to remove nitrogen dioxide gas from the atmosphere in ambient conditions. This discovery, confirmed by researchers using neutron scattering at the Department of Energy’s Oak Ridge National Laboratory, could lead to air filtration technologies that cost-effectively capture and convert large quantities of targeted gases, including carbon dioxide and other greenhouse gases, to facilitate their long-term sequestration to help mitigate air pollution and global warming.

As reported in Nature Materials, the material denoted as MFM-300(Al) exhibited the first reversible, selective capture of nitrogen dioxide at ambient pressures and temperatures—at low concentrations—in the presence of moisture, sulfur dioxide and carbon dioxide. Despite the highly reactive nature of nitrogen dioxide, the MFM-300(Al) material proved extremely robust, demonstrating the capability to be fully regenerated, or degassed, multiple times without loss of crystallinity or porosity.

“This material is the first example of a metal-organic framework that exhibits a highly selective and fully reversible capability for repeated separation of nitrogen dioxide from the air, even in presence of water,” said Sihai Yang, one of the study’s lead authors and a lecturer in inorganic chemistry at Manchester’s School of Chemistry.

Professor Martin Schröder, another lead author from Manchester Chemistry, commented, “Other studies of different porous materials often found performance was degraded in subsequent cycles by the nitrogen dioxide, or that the regeneration process was too difficult and costly.”

As part of the research, the scientists used neutron scattering techniques at the Department of Energy’s Oak Ridge National Laboratory to confirm and precisely characterize how MFM-300(Al) captures nitrogen dioxide molecules.

“Neutrons can easily penetrate dense materials and they are sensitive to lighter elements, such as the hydrogen atoms inside the MFM, which enabled us to observe how the nitrogen dioxide molecules are confined within the nano-size pores,” said Timmy Ramirez-Cuesta, a co-author and coordinator for the chemistry and catalysis initiative at ORNL’s Neutron Sciences Directorate. “We benefitted from the extremely high sensitivity and quantitative data provided by the VISION vibrational spectroscopy instrument on ORNL’s 16-B beamline at the Spallation Neutron Source, which uses neutrons instead of photons to probe molecular vibrations.”

The ability to directly observe how and where MFM-300(Al) traps nitrogen dioxide is helping the researchers validate a computer model of the MOF gas separation process, which could help identify how to produce and tailor other materials to capture a variety of different gases.

Computer modeling and simulation played critical roles in interpreting the neutron scattering data by helping us connect subtle changes in the vibrational spectra to interactions between the MFM-300 and trapped molecules,” said Yongqiang Cheng, an ORNL neutron scattering scientist and co-author. “Our goal is to integrate the model with experimental techniques to deliver results that are otherwise difficult to achieve.”

Capturing greenhouse and toxic gases from the atmosphere has long been a challenge, because of their relatively low concentrations and the presence of moisture in the air, which can negatively affect separating targeted gas molecules from other gases. Another challenge has been finding a practical way to release a captured gas for long-term sequestration, such as in underground depleted oil reservoirs or saline-filled rock formations. MOFs offer solutions to many of these challenges, which is why they are the subject of recent scientific investigations.

The project was supported by the U.K. Engineering and Physical Sciences Research Council and the Royal Society of Chemistry, the E.U. European Research Council, University of Manchester, University of Nottingham, Russian Science Foundation, and Russian Ministry of Science and Education. The European Synchrotron Radiation Facility in Grenoble provided access to its ID22 beamline.

The Spallation Neutron Source is a DOE Office of Science User Facility. The neutron research was supported by the Laboratory Directed Research and Development program at ORNL through the Virtual Experiments in Spectroscopy program and the Integrated Computer Environment Modeling and Analysis for Neutron data software program.

The University of Manchester’s research has real-world impact beyond academia. From tackling cancer and poverty to finding the energy solutions of the future, our research is making a real difference to the quality of people’s lives across the globe. For more information about the Nature Materials study and MOF gas separation research, visit https://www.chemistry.manchester.ac.uk/connect/.

UT-Battelle manages ORNL for DOE’s Office of Science. The Office of Science is the single largest supporter of basic research in the physical sciences in the United States and is working to address some of the most pressing challenges of our time. For more information about ORNL and its neutron research capabilities, please visit http://energy.gov/science/. 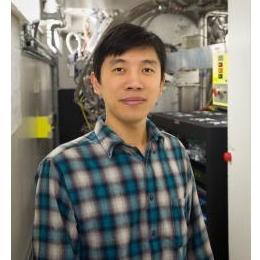