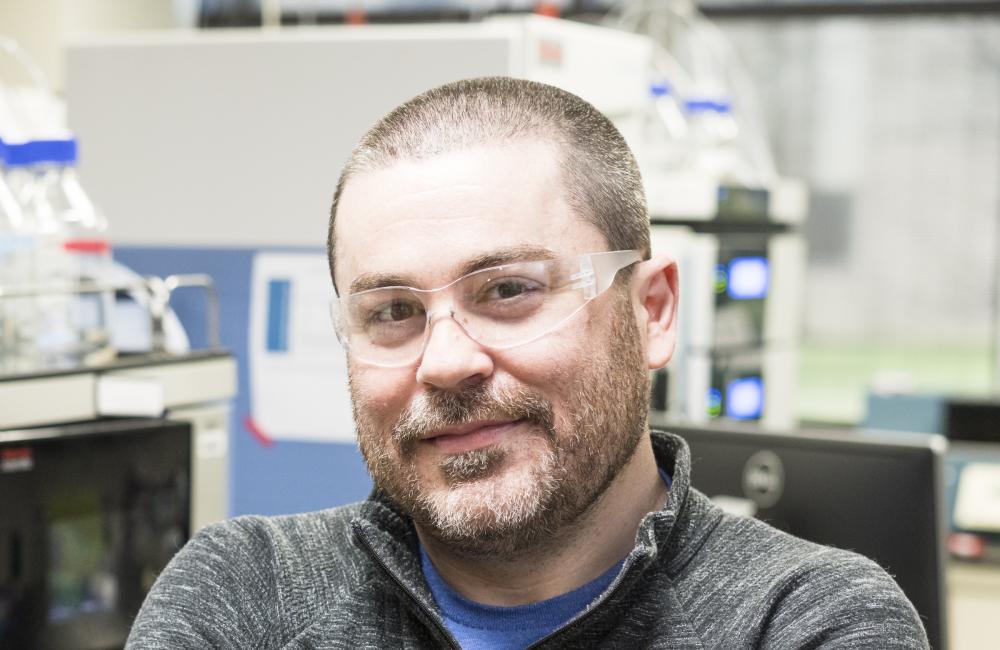 Working at the nexus of biology and analytical chemistry, Rich Giannone focuses on one of the keys that makes advances in bioenergy, bioengineering and human health possible – proteins.

Giannone uses a suite of sophisticated equipment and capabilities at Oak Ridge National Laboratory to better understand this primary driver in biological systems.

He applies skills in liquid chromatography and mass spectrometry to tease out which proteins among thousands are responsible for certain characteristics in an organism or a community of organisms. These capabilities separate and measure molecules at high resolution, allowing Giannone to compare the abundance of different proteins and make connections between genes and biological pathways.

“The genome tells us about the potential within an organism,” Giannone said. “But the proteins show what it is actually doing. Proteins are where the rubber really meets the road.”

Giannone works at the heart of an ever-evolving portfolio of projects focused on critical goals such as engineering microbes to convert bioenergy crops into biofuels and bioproducts and optimizing microbes to capture carbon from industrial waste gases and turn it into valuable chemicals. His love of learning and being in the lab motivates his work as he identifies the proteins, and by extension the genes, behind desirable characteristics in plants, microbes and mammals.

Working with scientists from national laboratories, academia and industry, Giannone and his colleagues in the Biological Mass Spectrometry Group design experiments and analyze the proteins in systems ranging from single cells to diverse microbial communities. The data and analyses they generate provide a critical piece of the puzzle in understanding complex biological systems across scales from genes to ecosystems.

Most of Giannone’s current work focuses on microbiomes.

My research has given me a new perspective on everything I walk past in life. Microbes are active pretty much everywhere.

Analyzing microbes gives Giannone the opportunity to explore the world beneath his feet. He works with microbial communities in the soil to help Center for Bioenergy Innovation scientists determine which microbes (and proteins) play a role in improving the efficiency of bioenergy crops in using nitrogen, tolerating drought and resisting disease.

He is working with a team focused on developing even faster protein analysis methods to match the quick and continual output of ORNL’s new Advanced Plant Phenotyping Laboratory, where automated systems can move hundreds of plants through an array of imaging stations to gather data about plant growth characteristics. Being able to connect real-time changes in the plants with dynamics in the soil microbiome will enable scientists to engineer and enhance these interactions to support crops and ecosystems.

Optimizing microbes that could benefit the environment while boosting the economy is the aim of one of his longstanding projects with industry. As part of a collaboration with LanzaTech, Giannone and his colleagues are providing key data to optimize microbes that pull carbon monoxide and carbon dioxide from industrial smokestacks to make fuels and chemicals. Giannone and team provide fundamental science discoveries about microbial proteins and metabolic pathways that enable LanzaTech’s engineers to refine and scale up their processes for commercialization.

Giannone is also working with university collaborators on a project funded by the National Institutes of Health exploring the breakdown of fiber in the digestive system. The researchers use gnotobiotic mice, which have no microbiome. Scientists introduce various known microbes to measure the effects. For instance, microbial communities taken from an obese human have been shown to induce similar characteristics in mice as well. 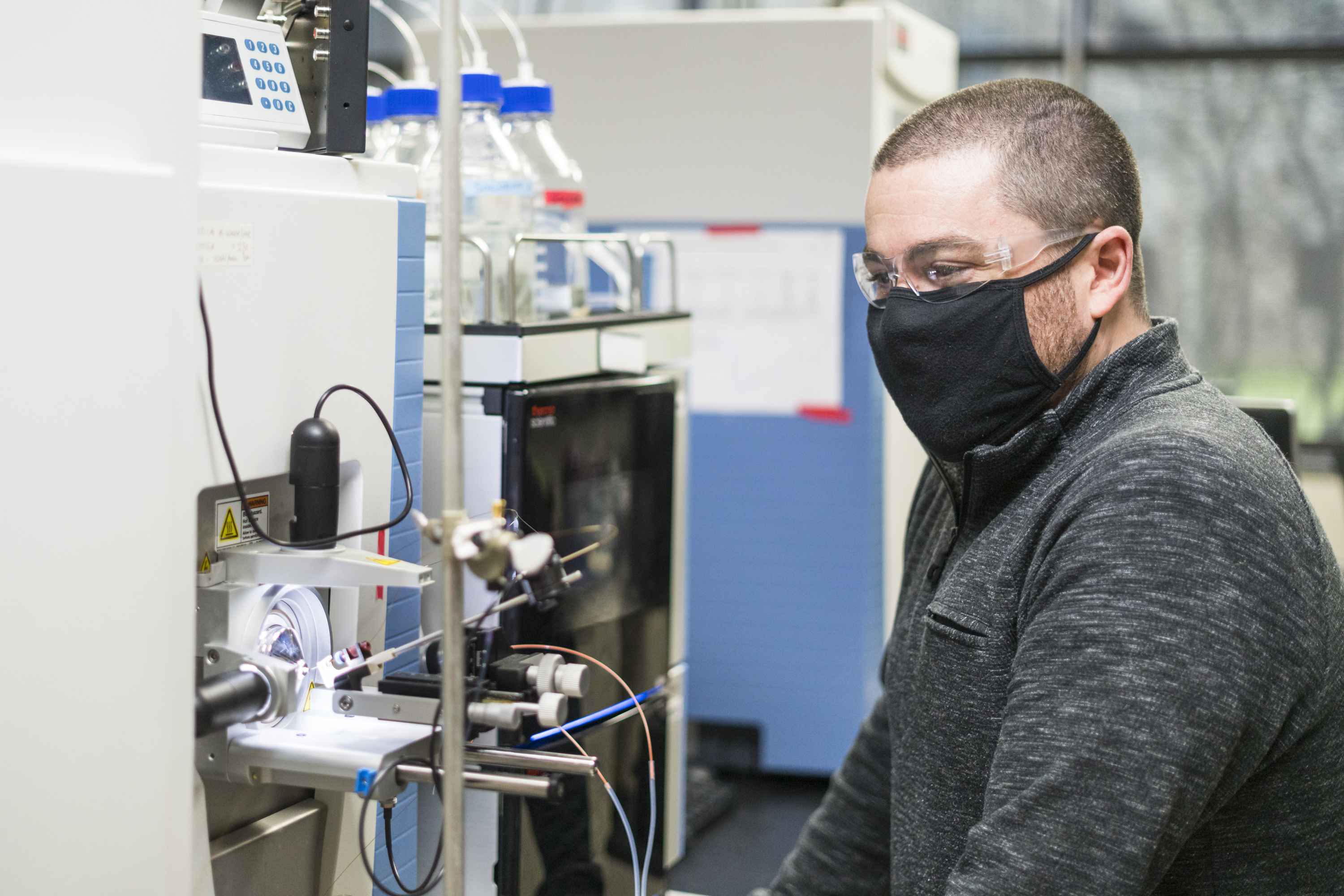 It was the Mouse House that originally drew Giannone to ORNL in 2003. At the time, he was working on his doctorate through the ORNL-University of Tennessee Genome Science and Technology program.

Founded shortly after the Hiroshima and Nagasaki bombings of World War II to study the effects of radiation, the Mouse House generated a wealth of scientific discoveries about mammalian genetics, reproductive biology and the biochemistry of germ cells.

Though surrounded by mice, Giannone’s doctoral research focused on the human telomere, the protein complex that protects the end of chromosomes. As part of the study, he designed a method for tagging proteins that showed which ones were interacting in the system, and he spent a great deal of time working with the laboratory’s mass spectrometry capabilities.

The lab work was a joy for Giannone who says he’d spend 100% of his workday in the lab if he could. With his doctorate in hand, it was an easy decision to accept an offer for a postdoctoral position at ORNL focused on mass spectrometry and to follow that up with a staff appointment in 2012.

Giannone’s path to science started with a love of animals. At Rutgers University, he first pursued a bachelor’s degree in animal science with the goal of becoming a veterinarian. Three years later, he had a change of heart. As a sophomore, he had worked in a laboratory doing genome sequencing, an emerging technology at the time as the Human Genome project was under way. With that experience in mind, he decided to pursue a dual degree in animal science and biotechnology. That pivotal decision unlocked new possibilities.

At his happiest doing hands-on work, Giannone now contributes to a wide variety of research. “I’m kind of a jack-of-all-trades and enjoy doing a little bit of everything,” Giannone said. “That’s one of the things I like about ORNL, getting to work on so many projects with multidisciplinary researchers. There’s something new all the time.” 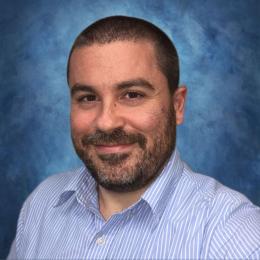