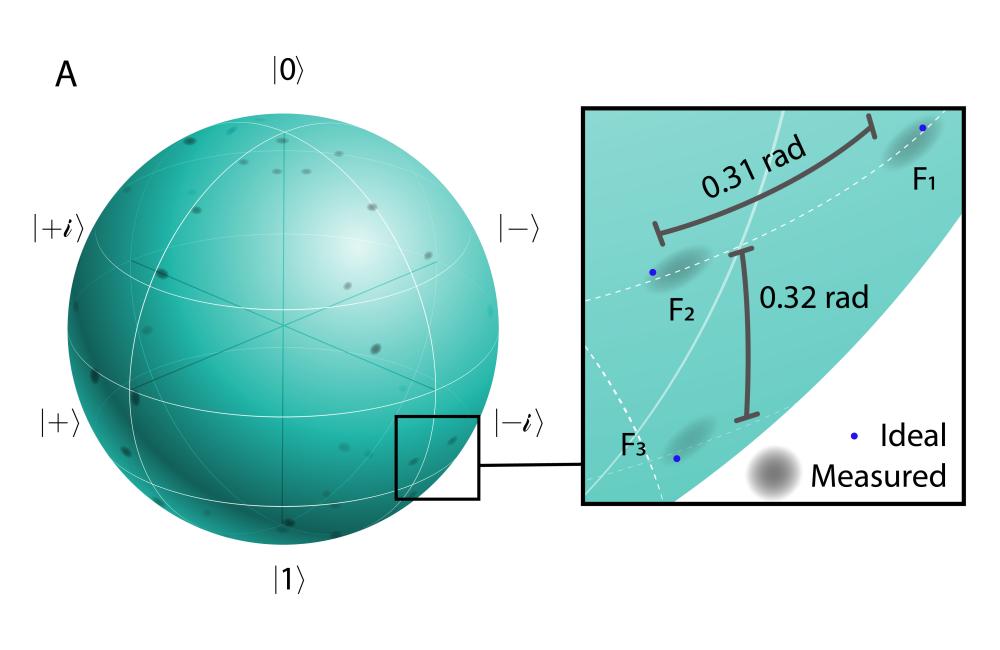 Each point on the sphere of this visual representation of arbitrary frequency-bin qubit states corresponds to a unique quantum state, and the gray sections represent the measurement results. The zoomed-in view illustrates examples of three quantum states plotted next to their ideal targets (blue dots). Credit: Joseph Lukens and Adam Malin/ORNL, U.S. Dept. of Energy

Few terms are more ubiquitous in the scientific arena these days than “quantum.”

But for these technologies to see the light of day, researchers must develop efficient quantum communications networks that connect quantum devices while preserving the delicate states of the particles used to transmit information.

A team of researchers at the Department of Energy’s Oak Ridge National Laboratory, along with colleagues at Purdue University, has taken an important step toward this goal by harnessing the frequency, or color, of light. Such capabilities could contribute to more practical and large-scale quantum networks exponentially more powerful and secure than the classical networks we have today.

Specifically, the team is harnessing the properties of light and the principles of quantum mechanics to transfer information, making the network itself a photonic quantum information processor. This approach is promising for several reasons.

For starters, photons travel at the speed of light, allowing the information to get from point A to point B as quickly as possible. Photons generally don’t interact with each other or the surrounding environment, ensuring the information won’t get scrambled or become corrupted in transit. “Light is really the only viable option for quantum communications over long distances,” said project leader Joseph Lukens, an ORNL research scientist, Wigner Fellow and DOE Early Career Award winner who helped detail the team’s results in Physical Review Letters.

The team used light to produce frequency-bin qubits, or single photons that reside in two different frequencies simultaneously, to demonstrate fully arbitrary communications operations in frequency encoding for the first time. While frequency encoding and entanglement appear in many systems and are naturally compatible with fiber optics, using these phenomena to perform data manipulation and processing operations has traditionally proven difficult. Such operations, however, are required for basic networking functions in quantum communications and, by extension, the realization of a vast range of quantum technologies.

Using a technology developed at ORNL known as a quantum frequency processor, the researchers demonstrated widely applicable quantum gates, or the logical operations necessary for performing quantum communication protocols. In these protocols, researchers need to be able to manipulate photons in a user-defined way, often in response to measurements performed on particles elsewhere in the network. Whereas the traditional operations used in classical computers and communications technologies, such as AND and OR, operate on digital zeros and ones individually, quantum gates operate on simultaneous superpositions of zeros and ones, keeping the quantum information protected as it passes through, a phenomenon required to realize true quantum networking.

By proving that their configuration could transform any qubit state into a different qubit state, the team demonstrated practical information transfer. “If you can do arbitrary operations, you can do any of the fundamental quantum communication protocols such as routing based on frequency conversion,” said Lukens.

Theirs is one of many different systems, but among the most promising considering the results. As an example, the team successfully demonstrated upwards of 98% fidelity — a quantitative measure of accuracy — using their custom configuration.

While frequency-bin quantum networking has been historically difficult to control, the team’s toolbox, Lukens said, makes it much more controllable. Not only that, it’s a naturally produced system that translates well to existing fiber optics. In fact, the system was devised using classical telecom components such as phase modulators. These factors make the technology less expensive and more attractive to industries looking to apply it. Furthermore, this domino effect advances both classical and quantum communications simultaneously, thus advancing the team’s methods and possibly bringing large-scale quantum networks one step closer to reality.

Their next experiment will involve implementing their system on a photonic integrated circuit. “There are lots of unforeseen applications,” said Lukens. “Frequency encoding is naturally produced by many different systems, and it’s very well suited to optical fiber, so the potential application space should be broad.”

This work was funded in part by the DOE’s Office of Science through the Early Career Research Program. Co-authors of the study include Hsuan-Hao Lu, Emma M. Simmerman, Pavel Lougovski, Andrew M. Weiner and Joseph M. Lukens.