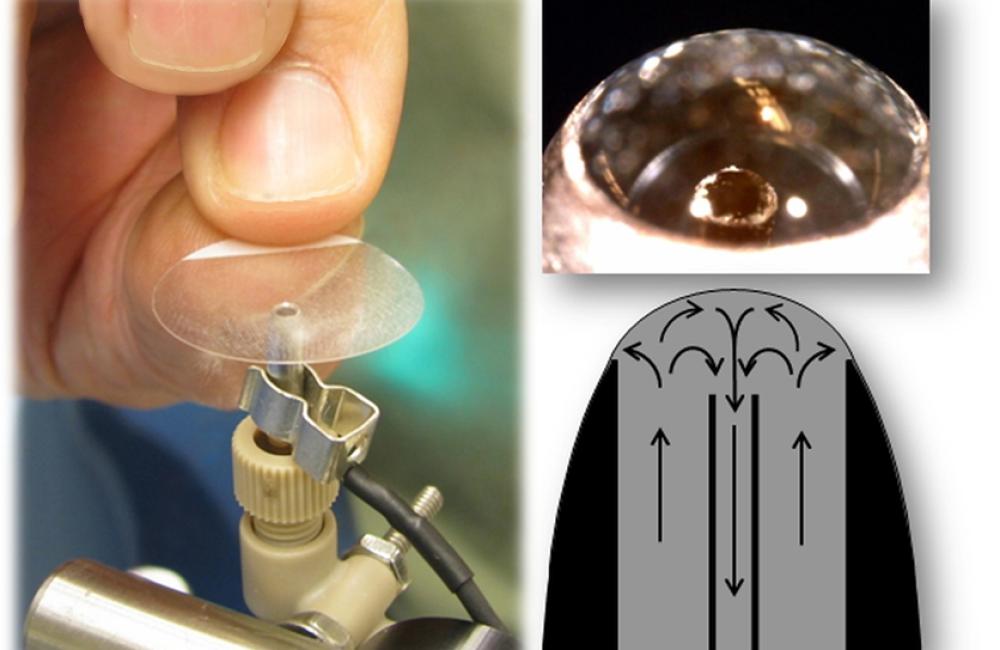 View a hi-res version of this image
A close-up look at the Open Port Sampling Interfaces for Mass Spectrometry, one of ORNL’s seven 2016 R&D 100 Award winners.

OAK RIDGE, Tenn., Nov. 4, 2016—Researchers at the Department of Energy’s Oak Ridge National Laboratory have received seven R&D 100 Awards in recognition of their significant advancements in science and technology. The honorees were recognized on Nov. 3 at the 54th annual R&D 100 Conference, sponsored by R&D Magazine.

The awards, known as the “Oscars of Invention,” honor innovative breakthroughs in materials science, biomedicine, consumer products and more from academia, industry and government-sponsored research agencies.

ORNL researchers were recognized for the following innovations:

Oak Ridge Graph Analytics for Medical Innovation was developed by a team of ORNL researchers led by Sreenivas Sukumar in collaboration with the National Library of Medicine.

The open source algorithm can search and process NLM’s entire MEDLINE database about 1,000 times faster than a normal workstation, find unexplored connections in medical texts and reason with the vast amounts of available information added everyday.

While most search engines look for keywords in titles and abstracts, ORiGAMI learns language patterns from its users and literature and is able to search in-depth for hidden associations that other searches might miss.

Funding for this project was provided by the Laboratory Directed Research and Development Program.

The Roof Savings Calculator Suite was developed by a team of researchers from ORNL, Jacksonville State University and White Box Technologies.

The Roof Savings Calculator is a Web-based tool for simulating energy flow and loss in businesses and homes and predicting the cost-effectiveness of cool roofing and attic technologies based on building type and location.

The suite integrates the AtticSim engine with the DOE-2.1E whole-building engine to create hour-by-hour annual simulations of building heating and cooling loads and estimate the impact of cool roofing products on energy and cost savings.

It is more accurate and customizable than the current DOE and EPA energy calculators and is designed to educate builders and consumers about the money saving potential of roofing upgrades.

This project was funded by the DOE’s Building Technologies Office, the California Energy Commission, White Box Technologies, and CentiMark, with support from additional private companies and trade associations.

G-Mode: Full Information Acquisition in Scanning Probe Microscopy and Spectroscopy was developed by a team of ORNL researchers led by Stephen Jesse.

Scanning probe microscopy uses a rastering probe to map the shape of surfaces and capture physical and chemical properties of materials on the nanometer and atomic levels. However, this approach is traditionally limited to a minute fraction of available information, making interpretation of observed nanoscale phenomena much more difficult.

G-Mode uses a custom controller to rapidly collect and thoroughly process the information flow from a microscope detector in its entirety, yielding all accessible information about minute changes sensed by the probe as it interacts with nanoscopic volumes of a sample.

While competing technologies focus on recording a single, high quality component of the probe signal, they can incidentally filter away or ignore information. G-Mode uses a fundamentally different approach by capturing and storing almost 200 million interactions streaming from the detectors per scan. It then processes the data through advanced machine learning algorithms to expose valuable, information-rich correlations and produce large high-resolution images of dynamic material properties 3,500 times faster than conventional state-of-the-art methods.

Virtual Environment for Reactor Applications was developed by a consortium of researchers from ORNL, the Electric Power Research Institute, Westinghouse Nuclear and Idaho, Sandia and Los Alamos national laboratories.

VERA is a physics simulation tool that visualizes the internal processes of commercial nuclear fission power plants and predicts reactor behavior in a number of potential scenarios.

It has demonstrated the power up process of a new plant, modeled accidents and emergency situations and examined the effects of corrosion on fuel rod performance.

VERA was funded by the DOE’s Consortium for Advanced Simulation of Light Water Reactors.

U-Grabber was developed by a team of ORNL researchers led by Sheng Dai in collaboration with the University of Tennessee and 525 Solutions.

The U-Grabber is an adsorbent material designed to extract uranium and other metals from water inexpensively and efficiently.

The material is made from polyethylene fibers, similar to PVC, woven into braids and grafted with chains of a uranium-attractive chemical called amidoxine. The free-floating uranium in the water binds with the fibers and can be extracted, purified and sold as nuclear fuel.

The fibers can be reconstituted and reused, are cheap to produce at scale and can bolster dwindling terrestrial supplies of uranium. They can also be customized to bind with other toxic or valuable aqueous metals, providing an environmentally sound method of cleaning bodies of water such as mines or fly ash ponds.

U-Grabber was funded by the DOE’s Office of Nuclear Energy.

The most difficult usability barrier for mass spectrometry is producing and transferring viable samples into the device. The Open Port Sampling Interfaces remove this impediment and allow easier, universal input of samples via accessible intake ports.

The ports, one a shallow swirling vortex, the other a conical solvent dome, use constantly flowing liquid streams to convey the sample into the ionization source of the spectrometer. They accept many types of samples, from organic oils to biological tissue, and produce results almost instantaneously.

The interfaces make mass spectrometry easier for novices and experts alike, as samples do not require processing and the ports are self-cleaning, reducing the risk of cross contamination.

Mass spectrometers modified with these new sampling interfaces combine speed, ease of use, and high imaging resolution to serve as a valuable tool in materials science, biology, chemistry and more.

The development team was Gary Van Berkel and Vilmos Kertesz.

This project was funded by the DOE’s Office of Science.

Waste Tire Derived Carbon was developed by a team of ORNL researchers led by Parans Paranthaman and the RJ Lee Group.

ORNL material chemists devised a proprietary process for repurposing discarded car tires as a source of carbon powder, a sooty hydrocarbon byproduct that can be modified to incorporate into anodes of lithium-ion batteries.

The recycled tires are shredded, cryogenically pulverized to powder and soaked in sulfuric acid, then roasted in a furnace to recover the carbon composite powders with a yield of more than 50 percent of the original mass.

The carbon powder is chemically similar to graphite but has a unique microstructure that is superior in rechargeable batteries, with a higher electrochemical performance and longer cycle life than the best graphite anodes.

This inexpensive, environmentally beneficial and seemingly unlimited resource is an opportunity to repurpose more than 1 billion car tires discarded globally every year while meeting the rising demand for cheap carbon as the battery market continues to grow.

This project was funded by the DOE’s Office of Science and ORNL’s Technology Innovation Program.

ORNL also received a special recognition award from R&D Magazine for the Wireless Power Transfer Based Electric and Plug-In Vehicle Charging System, submitted by Toyota Motor Engineering & Manufacturing North America and co-developed by a team of ORNL researchers with support from Cisco Systems and the International Transportation Innovation Center.

Providing the same speed with the convenience of wireless charging could increase consumer acceptance of electric vehicles and is considered a key enabler for hands-free, autonomous vehicles. Higher power levels are also essential for powering larger vehicles such as trucks and buses.

Funding for this project was provided by the DOE’s Energy Efficiency and Renewable Energy Office, Office of Vehicle Technologies.

UT-Battelle manages ORNL for the DOE's Office of Science. The DOE Office of Science is the single largest supporter of basic research in the physical sciences in the United States and is working to address some of the most pressing challenges of our time. For more information, visit the Office of Science website.