OAK RIDGE, Tenn., Sept. 25, 2015 – Some of the 300 million tires discarded each year in the United States alone could be used in supercapacitors for vehicles and the electric grid using a technology developed at the Department of Energy’s Oak Ridge National Laboratory and Drexel University.

By employing proprietary pretreatment and processing, a team led by Parans Paranthaman has created flexible polymer carbon composite films as electrodes for supercapacitors. These devices are useful in applications for cars, buses and forklifts that require rapid charge and discharge cycles with high power and high energy density. Supercapacitors with this technology in electrodes saw just a 2 percent drop after 10,000 charge/discharge cycles. 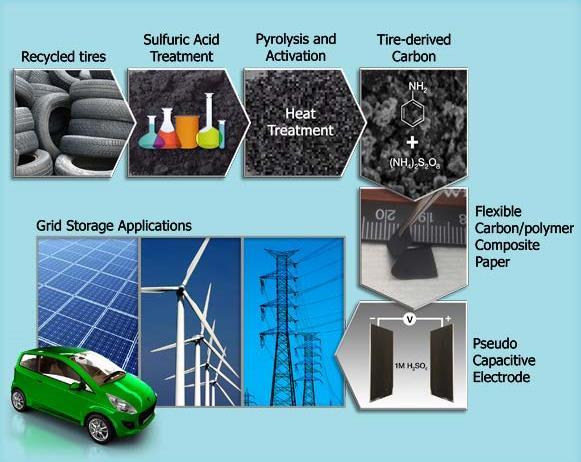 The technology, described in a paper published in ChemSusChem by Wiley-VCH, follows an ORNL discovery of a method to use scrap tires for batteries. Together, these approaches could provide some relief to the problems associated with the 1.5 billion tires manufacturers expect to produce annually by 2035.

“Those tires will eventually need to be discarded, and our supercapacitor applications can consume several tons of this waste,” Paranthaman said. “Combined with the technology we’ve licensed to two companies to convert scrap tires into carbon powders for batteries, we estimate consuming about 50 tons per day.”

While that amount represents just a fraction of the 8,000 tons that need to be recycled every day, co-author Yury Gogotsi of Drexel noted that other recycling companies could contribute to that goal.

“Each tire can produce carbon with a yield of about 50 percent with the ORNL process,” Gogotsi said. “If we were to recycle all of the scrap tires, that would translate into 1.5 million tons of carbon, which is half of the annual global production of graphite.”

To produce the carbon composite papers, the researchers soaked crumbs of irregularly shaped tire rubber in concentrated sulfuric acid. They then washed the rubber and put it into a tubular furnace under a flowing nitrogen gas atmosphere. They gradually increased the temperature from 400 degrees Celsius to 1,100 degrees.

After several additional steps, including mixing the material with potassium hydroxide and additional baking and washing with deionized water and oven drying, researchers have a material they could mix with polyaniline, an electrically conductive polymer, until they have a finished product.

“We anticipate that the same strategy can be applied to deposit other pseudocapacitive materials with low-cost tire-derived activated carbon to achieve even higher electrochemical performance and longer cycle life, a key challenge for electrochemically active polymers,” Gogotsi said.

Funding for this research was provided by DOE’s Office of Science and the Laboratory Directed Research and Development and Technology Innovation programs at ORNL. 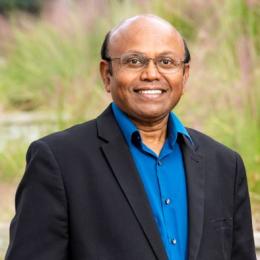