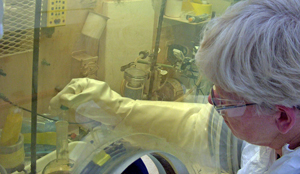 May 2, 2014 - Aided by a supply of the extremely rare element berkelium produced at the Department of Energy’s Oak Ridge National Laboratory, an international research collaboration has presented new evidence of element 117. The study, published in Physical Review Letters, strengthens the case for the discovery of the superheavy element first observed in 2010 by a Russian-U.S. team.

Superheavy elements, or those beyond the atomic number 104 in the periodic table, are produced in a laboratory by accelerating beams of nuclei toward a heavy target material. Fusion of the two nuclei can occasionally yield new, short-lived superheavy elements.

The latest experiment required close coordination between the accelerator and detection capabilities at GSI Helmholtz Centre for Heavy Ion Research in Darmstadt, Germany, and ORNL’s unique actinide isotope production and separation facilities. The special berkelium target material, essential to the synthesis of element 117, was produced over an 18-month-long campaign, including intense neutron irradiation at ORNL’s High Flux Isotope Reactor and chemical separation and purification at the lab’s Radiochemical Engineering Development Center.

ORNL shipped approximately 13 milligrams of highly purified berkelium-249, which itself decays with a half-life of only 330 days, to Johannes Gutenberg-University Mainz. There the exotic radioisotope was transformed into a target able to withstand the high-power calcium-ion beams from the GSI accelerator facility. Atoms of element 117 were separated from huge amounts of other nuclear reaction products in GSI’s TransActinide Separator and Chemistry Apparatus and identified through their radioactive decay.

“This is an important scientific result and a compelling example of international cooperation in science, advancing super-heavy element research by leveraging the special capabilities of national laboratories in Germany and the U.S.,” said ORNL Director Thom Mason.

The team included 72 scientists from 16 institutions in Australia, Finland, Germany, India, Japan, Norway, Poland, Sweden, Switzerland, the United Kingdom and the United States. The work at ORNL was supported by the Isotope Development & Production for Research and Applications program and by the Office of Nuclear Physics within DOE’s Office of Science.

Read the full press release from GSI Darmstadt at https://www.gsi.de/en/start/news/detailseite/datum/2014/05/02/superschweres-element-117-nachgewiesen.htm. More information about element 117 is available at https://phys.org/news/2016-11-tennessine-element.html.

UT-Battelle manages ORNL for DOE's Office of Science. The Office of Science is the single largest supporter of basic research in the physical sciences in the United States, and is working to address some of the most pressing challenges of our time. For more information, please visit http://energy.gov/science/.