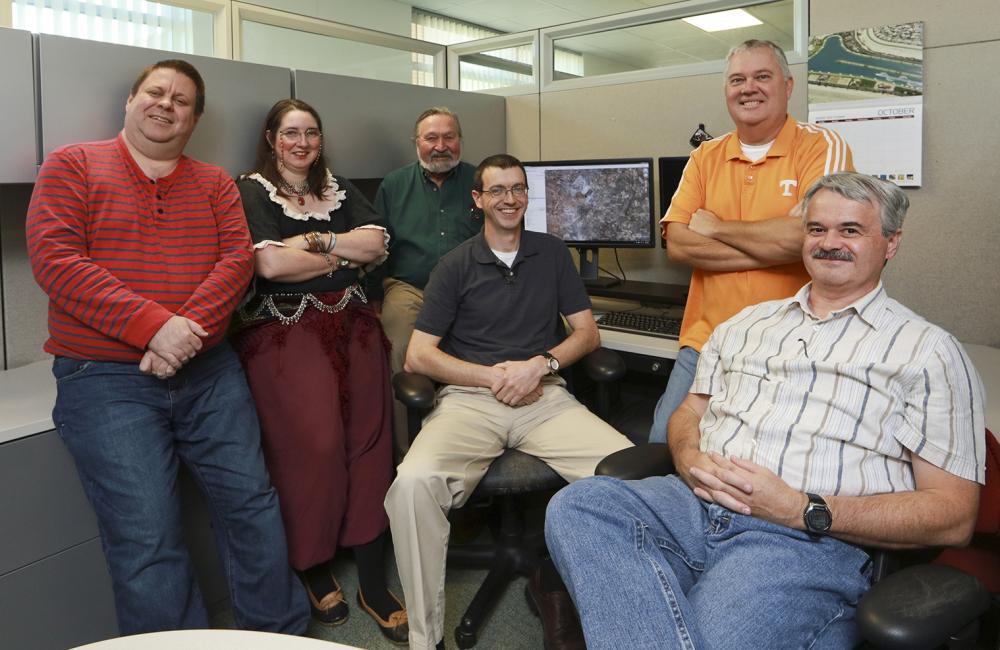 December 18, 2015 – Bruce Lester has had a lot of jobs: fisherman, horse trainer, “professional stair builder.” He last worked for a real estate company, surveying land using geographic software. “When the bottom fell out of the construction industry and the company downsized, I got laid off,” he said.

Lester decided to focus on re-entering the workforce in a field he’d grown to love: geographic information science (GIS).

He’s part of a group of Roane State Community College students and graduates who have re-entered the technology workforce after their careers took a downturn.

ORNL has partnered with RSCC to give six current and former GIS students analytical experience through internships and firsthand experience.

“Satellite images are processed by ORNL’s image analysis software, but it’s up to me and the other interns to make them better so they’re useful,” former maintenance technician Rusty Dryman said.

“Sometimes the software misses structures. It can identify part of a mountain as a remote cabin full of people,” Pyle said. “But the more we work with the satellite maps and the technology, the more we ‘teach’ the program.”

Work completed through the GIS internship supports work ORNL is conducting for the U.S. government and also the Bill and Melinda Gates Foundation. The Gates Foundation relies on the information for its humanitarian work, including delivery of life-saving vaccines and medical treatment to remote and sparsely populated areas.

In times of crisis, when seconds are precious and means are few, the population maps are invaluable. “I know my geographic work at ORNL has a direct impact, even as an intern, and I haven’t felt that way about any of my other jobs,” Chris Zerr said.

“For most of us, this isn’t our first career, or even the second or third,” said Darrell Roddy, a recent graduate of Roane State’s GIS Technical Certificate Program who previously worked in E911 services. “We’re not like ‘normal’ students or interns—but that’s a good thing, because we know first-hand the value of this direct experience, especially from a place like ORNL.”

ORNL has long partnered with the Roane State. “I am elated to have this partnership with ORNL,” said Pat Wurth, associate professor and director of RSCC’s GIS & Geography program.

“The opportunity for Roane State Community College GIS students and graduates to intern at ORNL is invaluable for applying and enhancing their skills,” Wurth continued. “The internship provides professional experience, which will enable them to [gain] credentials and advance in their careers.”

Though Zerr began her degree in GIS through Roane State years ago, she’s had a few roadblocks in finishing up. “Life happened,” she said. “The economy took a downturn, I had problems with my health, and I was laid off from job after job.”

“Until pretty recently, I didn’t think I could get back into the field again,” she said.

The career paths of participants in the GIS internship varied over the years, but they now share something in common: excitement at re-entering the technological workforce.

“I’ve always had an interest in maps, globes, satellites, you name it. They’re fascinating. I can work with the maps all day,” former bank employee Jeff Manning said.

Lester agreed. “Working with mapping at ORNL is the best job I’ve ever had,” he said. – by Ashanti B. Washington

UT-Battelle manages ORNL for the Department of Energy’s Office of Science. The Office of Science is the single largest supporter of basic research in the physical sciences in the United States, and is working to address some of the most pressing challenges of our time. For more information, please visit http://energy.gov/science/