Biologist Larry York’s fascination with plant roots has spurred his research across four continents and inspired him to create accessible tools that enable others to explore the underground world.

As a plant physiologist at Oak Ridge National Laboratory, York examines the ways roots take up nutrients, looking for traits that improve crop productivity. His research has centered mainly on corn, soybeans and wheat with a more recent focus on bioenergy crops such as switchgrass and poplar.

“The more I work with roots, the more fascinated I become,” York said. “They are important for many reasons, and there’s a growing acknowledgement of their influence on soil carbon storage and climate change.”

One of York’s recent studies for the Center for Bioenergy Innovation at ORNL examined how switchgrass roots change in response to water and nitrogen deficits. The research team took advantage of ORNL’s long history of working with stable isotopes to measure the contribution of roots to plant growth.

Using a stable isotope of nitrogen, they showed that plants with deeper roots took up more nitrogen and that stressed plants grow finer, lateral-branching roots to forage for scarce nutrients. Understanding these root traits and behaviors can aid efforts to develop hardier, more drought resistant crops.

Much of York’s research involves digging up plants and measuring important root traits such as length and diameter. This is no easy feat as many roots are fragile, with some as fine as a human hair.

York had noted the lack of an easy-to-use solution for imaging roots and analyzing those images during his early studies. He filled that gap by creating RhizoVision Explorer during his time working at Noble Research Institute. Used with a flatbed scanner, this free software has quickly become a go-to technology for measuring roots.

“It allows more people to study roots than ever before,” York said. “That’s exciting to me, because I feel like I’m magnifying my impact by getting the software into the hands of anybody who wants to study roots.”

“How many good ideas must there be out there for how we can use roots to increase crop productivity or build soil carbon?” he continued. “Now there are thousands of additional scientists who maybe weren’t traditionally root biologists who are able to investigate these topics, too.”

Imaging has been a thread running throughout York’s research, and he has hosted numerous in-person and virtual workshops to teach others how to image and measure roots. He is particularly excited about the newest imaging capability at ORNL, the Advanced Plant Phenotyping Laboratory. Currently in the commissioning phase, this unique lab holds a diverse array of imaging capabilities for measuring plant growth characteristics.

York is contributing to a project that will extend the application of these imaging capabilities to belowground as well. Having these real-time data will facilitate connecting traits to underlying genetics and plant performance, informing design of better crops.

Though he’s always loved science and plants, York did not originally set out to study roots. Many family members, including his grandmother and aunt, influenced him through their careers in math and science. When he began his undergraduate studies at the University of Kentucky, York thought to emulate his uncle and pursue a degree in physics.

He quickly found that he preferred the more hands-on science of biology. It was a project for one of his undergraduate classes that first had him digging roots. His interest grew as he read more papers about them and asked questions of experts in the field. One such conversation led York to apply for graduate school at Penn State where he completed his doctorate in ecology.

It was during his doctoral studies that York began to research roots abroad. His thesis focused on corn crops and nitrogen use, and he continued his studies year-round by spending his winters in South Africa doing field research. Through a one-year fellowship, he also studied soybean roots and phosphorous uptake in China, where he met his wife who also studies roots.

York next studied wheat roots during a postdoctoral appointment at the University of Nottingham in England. After a brief stint as a postdoctoral researcher with the University of Missouri, he joined the staff of Noble Research Institute where he focused on crop productivity and developing his root imaging software. It was during that time that he first began collaborating with the Center for Bioenergy Innovation on switchgrass studies.

The relationships he formed through CBI and the opportunity to collaborate with scientists across so many different fields were among the factors that drew him to join the staff at Oak Ridge this past July.

“I like public science,” York said. “I also knew there was a strength and growing interest here at ORNL specifically for roots and belowground work, and I wanted to be part of that team.”

Being closer to his family in Kentucky has been a bonus. York and his wife recently celebrated the birth of their second daughter and have relished sharing that joy with relatives. The family is putting down roots in a new home and enjoys exploring the nearby arboretum, botanical gardens and the mountains.

“I’ve got a lot to be thankful for and much to look forward to,” York said. “As I get settled in and learn more about the laboratory, I see a lot of opportunity to grow both professionally and personally.” 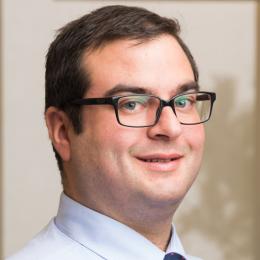