For Oak Ridge National Laboratory environmental scientist and lover of the outdoors John Field, work in ecosystem modeling is a profession with tangible impacts.

He uses ecosystem models to analyze sustainable methods for growing crops, including bioenergy feedstocks that can be converted into eco-friendly biofuels and bioproducts such as plastics or soil amendments. Field’s work targets climate change by analyzing both biofuel production and best practices for carbon storage in soil, such as growing bioenergy plants on marginal lands that cannot support food crops.

Because one-fourth to one-third of greenhouse gas emissions can be attributed to the agricultural sector, Field sees an emerging priority in using ecosystem models to identify opportunities for reducing agricultural emissions or storing more carbon in soils. He is enthusiastic about the possibilities but notes that developing solutions will take a collaborative effort that leverages expertise and capabilities across the national labs, federal agencies, academia and industry.

“The agricultural system is the biggest land footprint. It’s the biggest water footprint,” Field said. “It’s one of the biggest, if not the biggest, footprint in terms of water pollution. It’s this really challenging interdisciplinary space that brings very diverse groups of people together.”

Field recently relocated from Fort Collins, Colorado, where he witnessed the effects of a warming climate firsthand; record-setting wildfires blazed near his home during the pandemic, leaving so much smoke in their wake that it was unsafe to go outside.

The trees catching fire had recently fallen victim to another environmental disaster: an unusually high influx of mountain pine beetles. The bugs, native to Colorado, burrow into large pine trees to lay their eggs and complete their life cycle, killing the host tree in the process. In response to rising temperatures and droughts, beetle populations rapidly rose in the early 2000s, devastating Colorado’s vegetation and rendering trees dried and susceptible to fire.

“Even though beetles are a natural part of the system, they went from taking a very small fraction of the oldest and weakest trees to suddenly killing 70, 80, 90% of the trees in otherwise healthy forests all over the state. They’re now just standing gray dead trees, so it was really shocking to see that transition,” Field said.

In that era of environmental imbalance, Field spent his free time in nature, which inspired his sustainability research in ecosystem modeling at Colorado State University, or CSU, where colleagues worked on a project attempting to create bioenergy and bioproducts from the dead trees.

“That was a nice synergy, because you’d go out on the weekend, you’d hike through, you’d see the tree mortality, you’d see the impacts, and then you’d go into the office on Monday and get to think about, are there ways to make a little bit of lemonade from those lemons that we have?” Field said.

The son of two medical biologists, Field was exposed to science early and was always interested in entering the field. As an undergraduate student at Case Western Reserve University, Field studied mechanical and aerospace engineering. He completed his bachelor’s degree and joined a private company researching clean fuel cell power systems, where he became interested in sustainability and life cycle assessment in the context of climate change. While subsequently working toward his doctorate in mechanical engineering at CSU, colleagues introduced Field to the ecosystem impacts of sustainably growing biomass feedstocks for producing fuels and energy.

“My research is in that interdisciplinary space between the ecosystem models and the engineering models that think about how to use biomass, how do we convert it to fuels and how do we do that in the most carbon-efficient and environmentally friendly way possible,” Field said. “Working at the intersection between those two worlds is where I like to be.”

At CSU, Field worked with the DayCent ecosystem model to study ways to optimize the growth of feedstock plants, their conversion to biofuels and their ability to sequester carbon. He initially connected with the Department of Energy through his sustainability research at CSU, which is a partner of the Center for Bioenergy Innovation, a DOE Bioenergy Research Center at ORNL focused on accelerating domestication of bioenergy-relevant plants and microbes.

In March, he joined ORNL virtually and relocated to Tennessee in August. By joining the ORNL team, Field, who works primarily on the modeling side of sustainability research, is looking forward to the opportunity to work with researchers across multiple fields, from biologists in the greenhouses to computational scientists running simulations on supercomputers.

“There’s so much diversity in terms of what people study, there’s so much expertise here and there are just a lot of resources at ORNL between the really world class computing facilities and the expertise in machine learning, the expertise in remote sensing and satellite imagery,” Field said. “There are a lot of tools and potential collaborators to work with at ORNL that I’m really hoping are going to allow me to take my existing work and step it up a few levels and really think broader and think bigger and do more impactful work.”

Field has studied many aspects of ecosystem modeling, including the agricultural factors involved with choosing where to plant biofuel crops, such as switchgrass and poplar, as well as the carbon storage benefits of growing them on marginal lands that do not compete with food production.

Additionally, Field has studied biofuels such as Ethiopian mustard that can be grown in the winter on fallow land used for food crop production in other seasons. Year-round use of fields can also reduce erosion, prevent excess nutrients from leaking out of fields and build up carbon in the soil as plants pull the greenhouse gas carbon dioxide from the atmosphere.

“If you can grow bioenergy plants during the winter where you weren’t using that land to start with, there’s no food-versus-fuel concern because you’re not displacing anything. And if you do it right, there are a variety of environmental benefits,” Field said. “It’s good to have plants growing and land cover over the winter.”

As Field concludes the project studying winter feedstock plants, he’ll spend the next year focused on using remote sensing and ORNL supercomputing for finer scale analysis to better evaluate the biophysical characteristics of US agricultural lands.

“There are opportunities to use some of the remote sensing resources and data sources at ORNL in order to have a finer scale understanding of where marginal lands are within these agricultural landscapes and what the productivity is of conventional food crops on those marginal lands, and then what the productivity might be for energy crops, looking at a finer spatial scale than we have typically done before,” Field said.

Through all of his interdisciplinary work, Field builds a connection to climate change mitigation – the urgent motivator behind his life of research.

“That has been kind of a guiding force for me. Climate change really just underlies almost everything we do as a society in terms of using energy, in terms of constructing our homes and our society and our built landscape and producing our food,” Field said. “It’s just a really fundamental challenge that touches all aspects of life.”

UT-Battelle manages ORNL for Department of Energy’s Office of Science, the single largest supporter of basic research in the physical sciences in the United States. The Office of Science is working to address some of the most pressing challenges of our time. For more information, please visit energy.gov/science. – Alexandra DeMarco 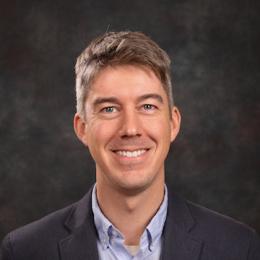