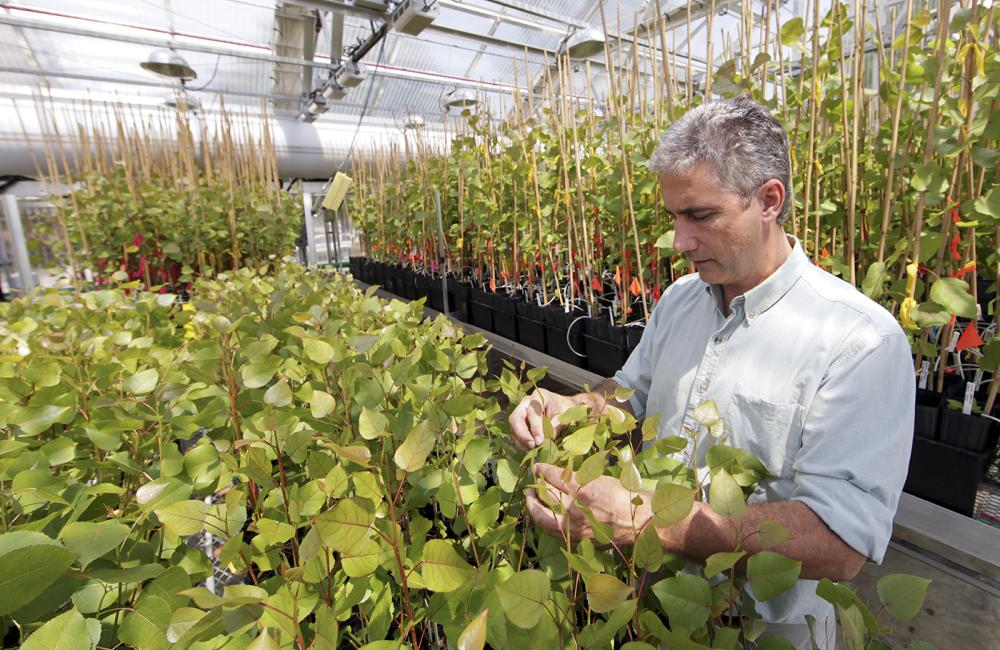 View a hi-res version of this image
ORNL bioscience researcher Jerry Tuskan had an early interest in plant genetics.

December 16, 2016 – It’s been 10 years since the Department of Energy first established a BioEnergy Science Center (BESC) at Oak Ridge National Laboratory, and researcher Gerald “Jerry” Tuskan has used that time and the lab’s and center’s resources and tools to make good on his college dreams of using genomics to study and improve plant species.

Tuskan, a corporate fellow and group lead for Plant Systems Biology at ORNL, and his fellow researchers took a cue from the sequencing of the human genome to advance the work of determining how plant DNA can affect physical traits, or phenotypes. With the help of ORNL’s advanced computing resources, the scientists have resequenced about 1,000 undomesticated genotypes of the fast-growing perennial poplar tree.

The researchers have identified 10s of millions of single nucleotide polymorphisms, or SNPs, giving the scientists “unprecedented statistical power to link DNA changes to phenotypes of interest,” Tuskan said.

The result is the Populus Genome-Wide Association Study (GWAS) dataset —about 17 terabytes’ worth of raw data— that scientists are using to find ways to overcome the natural resistance of plants to being broken down to simple sugars, a trait known as recalcitrance, for biofuels production.

Having a background in genetics allowed him “to translate how sequencing and computational technologies could be used to address DOE research areas in biofuels production, bioprocessing, and materials sciences,” said Tuskan, who also holds a joint appointment at DOE’s Joint Genome Institute in California where he is on the leadership team for the Plant Sciences program.

In addition to identifying genes related to recalcitrance, Tuskan and other scientists at the lab hope to use the knowledge to produce specialty fuels such as C4 alcohols and esters. With more study of the molecular mechanisms controlling the deposition of lignin, or the polymer that reinforces plant cell walls, the researchers also want to develop customized lignin that could be used in chemical, polymer, and materials production. This could be used to create insulating foams, improved carbon fiber for lightweight vehicles, or replacements for plastics used in consumer products, all part of a growing bio-based economy, Tuskan explained.

Tuskan became interested in his field of study while taking a genetics course as a sophomore at Northern Arizona University in Flagstaff. “The professor, Dr. Oliver Johnson, was just fantastic, and I sat in class dreaming about what we could do. At that point I knew the direction I would like to take my career, and it’s been one step after another since then.”

Tuskan received his BS in forest management from the school, later earning an MS in forest genetics at Mississippi State University and a PhD in genetics from Texas A&M. He began his work at ORNL in 1990 as a research scientist in the Environmental Sciences Division.

In his time away from the lab, Tuskan enjoys playing music—on guitar, bass, and mandolin—and uses these skills in his church choir. He also enjoys local hiking and camping.

UT-Battelle manages ORNL for the Department of Energy's Office of Science. The Office of Science is the single largest supporter of basic research in the physical sciences in the United States, and is working to address some of the most pressing challenges of our time. For more information, please visit http://energy.gov/science/.—by Stephanie Seay